Turkmenistan: Going with the grain

The idea that the president is concerned for the health and wellbeing of his people is undermined by the merry song-and-dance on which he has led the WHO.

Officials have been forced to shell out their own money to buy bicycles to take to such mass events as the unveiling of a new monument last week on World Bicycle Day. (state media)

The president’s devotion to cycling has not gone unnoticed overseas. That may, in fact, have been the point all along.

On June 2, the eve of International World Bicycle Day, a date whose creation was spearheaded by Turkmenistan, David Lappartient, the head of UCI, the world cycling body, bestowed his organization’s highest award of merit upon President Gurbanguly Berdymukhamedov in recognition of his contribution to the sport. The honor could not, sadly, be conveyed in person on account of the coronavirus pandemic, so Lappartient had to brandish Berdymukhamedov’s certificate at him via teleconference call instead.

Berdymukhamedov’s caprices are undeniably frivolous. He marked bicycle day with the unveiling of yet another folly, among a seemingly endless list now populating the capital, Ashgabat. This one was a giant, blue-colored pebble decorated with a cameo of a map of Turkmenistan and surrounded by gold-leafed cyclists mechanically rotating on a white base. Some stationary camels add local flavor. The president surveyed the monument while pushing along his own bike as singers performed a lively paean to cycling, sport in general and, of course, Berdymukhamedov himself. 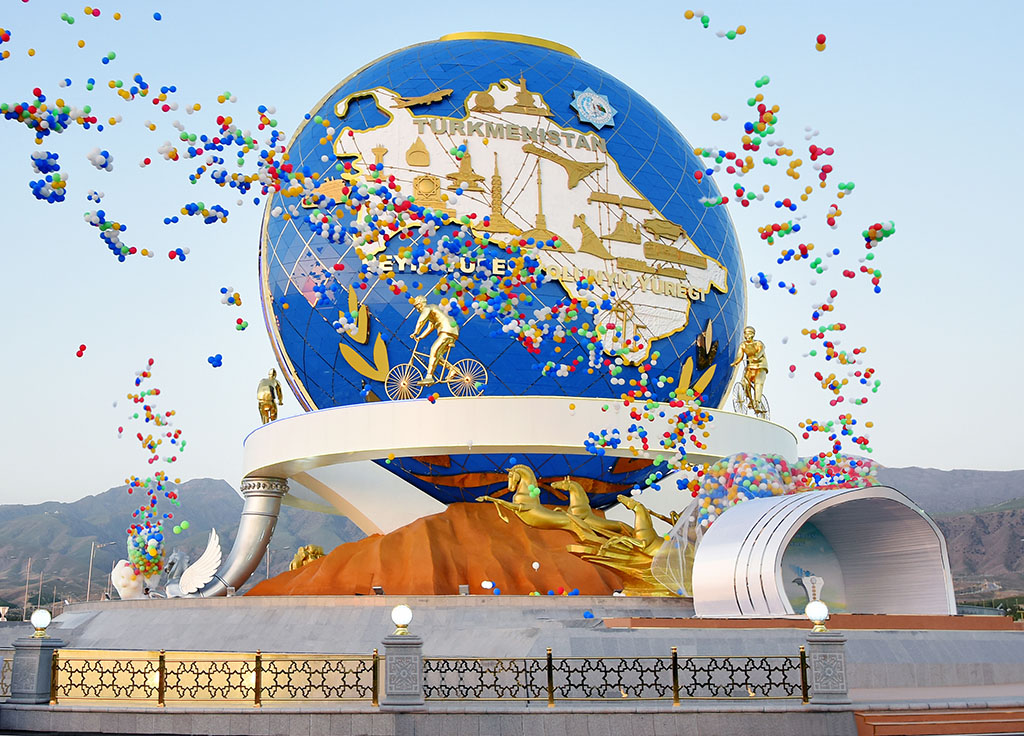 But there is a more serious intent here. Turkmenistan has learned about the dubious merits of sports diplomacy from the likes of Russia, China and Qatar, who have over the years secured hosting rights for major competitions despite their poor rights credentials. Such events, the wishful thinking goes, confers some degree of respectability upon host nations. International sports officials are reliably venal, corrupt and indifferent to violations of basic human decency – such as in Turkmenistan, where government officials have been forced to shell out their own money to buy bicycles to take to mass events – so securing hosting rights typically plays out as a formal dance of outright or implicit bribery.

Turkmenistan’s largest effort to date in this direction was the Asian Indoor and Martial Arts Games in 2017, on which millions of dollars were spent to entertain a miserably small number of people worldwide. Next up will be the UCI Track Cycling World Championships in October 2021, which Ashgabat will hope becomes a regular fixture on the sporting calendar. It already has a state-of-the-art, 6,000-seater velodrome, built for the 2017 Games, to host the event.

A more generous reading would allow for the possibility that Berdymukhamedov is sincerely concerned for the health and wellbeing of his population. That interpretation is undermined, however, by the merry song-and-dance on which Turkmenistan has led the World Health Organization. Hans Kluge, the Europe regional director for the WHO, was indicating as long ago as April that his organization was in negotiations to send a mission to Ashgabat to assist in readiness for a coronavirus outbreak. Turkmenistan continues to insist it has no cases. A visit has now finally been agreed, for some time this month – a delay that strongly suggests Turkmenistan is hiding something.

The U.S. government, in the person of Washington’s envoy to the Organization for Security and Cooperation in Europe, James S. Gilmore, certainly seems to think something fishy is going on. Addressing the OSCE’s permanent council on June 4, Gilmore evinced palpable exasperation at Turkmenistan’s continued claims of being coronavirus-free, which he implied were in themselves a threat to public safety.

“Government transparency and accountability are necessary parts of the solution to public health crises and governments have the responsibility to provide the public with thorough and accurate information,” he said.

Ashgabat still dutifully and regular participates in teleconference calls with international partners to reiterate assurances that it is implementing all necessary WHO-issued recommendations to protect against the spread of COVID-19, while all the while holding mass events, like the bicycle monument opening. These are invariably attended by representatives from those same international partner bodies and nations terrified of somehow offending Berdymukhamedov.

The emphasis that the president places on sport makes personnel management in that area a matter of particular interest. And Berdymukhamedov seems unhappy with how sport is being run and covered. Dayanch Gulgeldiyev, who was point-man for the 2017 Ashgabat Games, has accordingly been fired for “serious shortcomings in his work” and replaced with Gulmyrat Agamyradov, whose current titles include chairmanship of the national Federation for Automobile Sport, another of the president’s passions. There was a change at the top of the state-run Sports TV channel too, with Saparguly Ovezberdiyev taking over from acting director Annamyrat Geldyev.

Turkmenistan is admitting to almost no economic pain from COVID-19 either. At a June 5 government meeting, Berdymukhamedov conceded transportation is experiencing some “difficult conditions” – mostly to do with cashflow, by all appearances – but then breezily waved these troubles away as minor. These statements are as detail-free as they are senseless. Transportation across Turkmenistan’s borders has been at a standstill for months, although it is reportedly set to restart imminently, so minimizing the problems appears deluded.

Shamuhammet Durdylyev, a deputy chairman of the Cabinet, then confirmed his leading toady status by delivering a welter of implausibly blistering figures on industrial output this year to date. The Industry and Construction Ministry has exceeded its plan by 6 percent, he said. The Energy Ministry exceeded its plan by almost 16 percent. But the prize goes to state chemicals company Turkmenkhimiya, whose head, Nyyazly Nyyazlyev, has recently been given so many “last warnings” for poor work that it is hard to keep count, exceeded their plan by a whopping 24.4 percent.

But what to do with all this bounty? Berdymukhamedov suggested that Turkmenistan consider luring financial investment by offering delivery of manufactured materials in exchange. It is not clear how this would work, but this sounds like the kind of barter deals a cash-strapped Ashgabat had to sometimes rely on for essential goods in the early 1990s.

Then there is agriculture. Esenmyrad Orazgeldiyev, the agriculture minister, said output in his sector had increased by 17.4 percent year-on-year. It is challenging to account for these relentless reported surges in productivity, given that the crop diversification agenda away from wheat and cotton is a fledgling affair and sowed lands are not noticeably increasing in size. Officials would doubtless attribute such purported successes to development of the food-processing sector, the supposedly effective use of water resources and the adoption of digital technologies, but in the absence of credible evidence for any of this, the temptation is to adopt a permanent doubting Thomas stance.

Berdymukhamedov may be of the same view as well. On June 8, he hopped onto a plane and headed out to the Lebap province to see with his own eyes what progress is being made with the wheat harvest, which began last week. The president earlier this month betrayed some concern that certain quantities of grain are going missing – in other words, being stolen. Indeed, RFE/RL’s Turkmen service, Radio Azatlyk, reported last month that officers from the National Security Ministry have been charged with guarding against grain theft in the Lebap province.

Visits to all of Turkmenistan’s five provinces, likewise with the purpose of keeping tabs on the pace of grain harvesting, are planned for this month.