Turkmenistan: Good things come to those who weightlift

Ashgabat once again splurges on sports and white elephants, while the government and households can’t pay their bills. 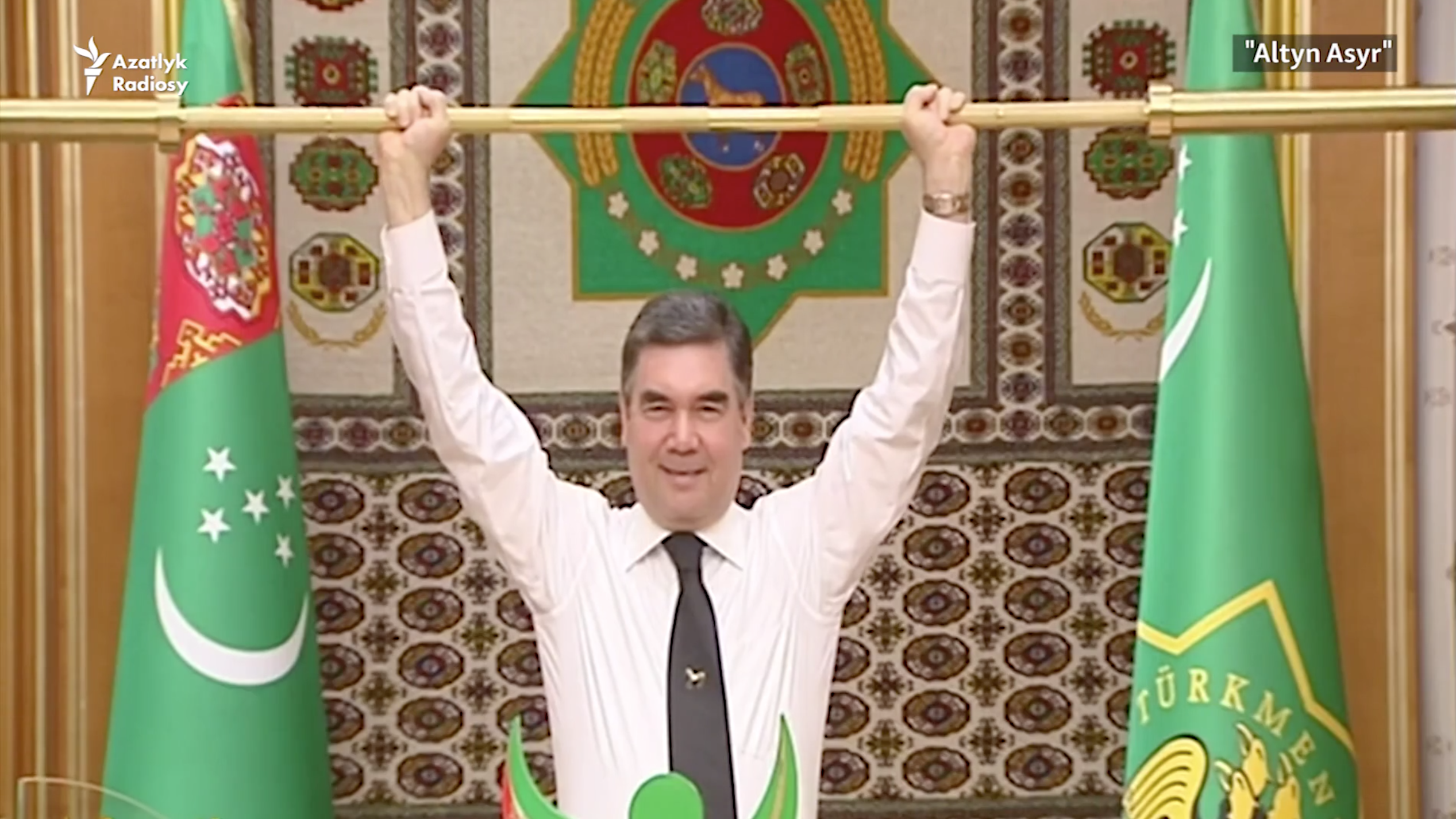 Berdymukhamedov raises the bar for mocking coverage of his country (screengrab).

Ashgabat, the capital of Turkmenistan, is hellbent on earning a reputation as Central Asia’s premier venue for sporting events. In that spirit, it is now hosting the 2018 World Weightlifting Championships.

Adulation-hungry President Gurbanguly Berdymukhamedov seized the opportunity in characteristically showy style to draw more attention to himself. In scenes shown on television, he lifted a gold-colored barbell to inordinately slavish applause from his Cabinet. This minor-key stunt — Berdymukhamedov has engaged in far more visually eccentric antics in the past — earned him coverage, but perhaps not quite of the kind he would have liked.

Global sporting bodies appear not to care about the extent their disciplines are being harnessed to further Berdymukhamedov’s cult of personality. For example, according to Turkmen state media, the opening ceremony for the weightlifting championships, which began on November 1 and will run through November 10, consisted of a figurative representation of several of Berdymukhamedov’s books. At one stage, a large-scale replica of a recently published work, “Turkmenistan: The Heart of the Great Silk Road,” was wheeled into the arena. Festivities ended with a rendition of the song “Forward, Only Forward, Beloved Fatherland, Turkmenistan!” It should go without saying that Berdymukhamedov wrote that tune and has previously performed it in public.

Cynics may have grounds for suspecting that the International Weightlifting Federation is making even more concessions to Turkmenistan. Sporting news website Inside the Games has reported that the IWF executive board mysteriously authorized four Turkmen competitors to take part in the competition even though they had failed to comply with anti-doping regulations. Another 75 excluded athletes not from Turkmenistan did not get such generous treatment. And this week, Turkmen athlete Yulduz Dzhumabayeva had two bronze medals upgraded to silver for her performance in the 45-kilogram category after judges discovered they had committed an error.

While Berdymukhamedov continues to indulge his whims, the population is bracing for the loss of free allocations of electricity, gas, drinking water and table salt as of 2019. It is already the case that people have to pay for those utilities if they go over their allocated quota, and that appears to be causing difficulty in some places. In Dashoguz province, the government is reportedly undertaking heavy-handed efforts to claw back some money for unpaid household gas bills. What that says for the prospects of the full-on monetization of the utilities system is anybody’s guess.

The latest addition to the now-regular food shortage bulletin is about a deficit of eggs in Ashgabat — a situation reported by the Vienna-based Chronicles of Turkmenistan. It is not often that the capital is impacted by the disappearance of basic staples, so this will be unnerving news.

Turkmenistan is a serial delinquent non-payer of dues, and this week has brought more evidence of that habit. The Netherlands-based Alternative News of Turkmenistan, or ANT, has reported on how state oil company Turkmennebit transferred some $1.3 million to Cypriot oil services firm Intercomplect Limited in April. Good, but four years late. And even that amount is apparently only around 15 percent of the $8 million owed.

As ANT explains, this payment appears to have been enough to persuade Intercomplect to return to Ashgabat in July. Turkmennebit chairman Dovletdurdy Khadzhiyev promised unpaid sums would also be paid. But that does not seem to have happened. A representative of the CIS Debt Recovery Solutions law firm told ANT that if Turkmenistan does not cough up its debts in full, it will move to embarrass the regime by exposing details about the dispute and naming names.

According to data posted with the State Commodity and Raw Materials Exchange and spotted by the eagle-eyed observers at the Chronicles of Turkmenistan, the government earlier this year spent 520,000 euros ($594,000) on a Mini Cooper that Berdymukhamedov used during the protracted warm-up for the Amul Khazar car rally. While not huge, the sum represents a distressing waste for a country unable to feed its own population. Still, the Mini Cooper was rolled out for the World Weightlifting Championships opening ceremony, so they are getting some use out of it.

Turkmenistan has developed an unwholesome addiction to pointless expenditures on white elephants. There is the largely unneeded, state-of-the-art terminal port on the Caspian Sea opened with a fanfare this May. And Ashgabat's gargantuan and massively under-utilized, falcon-shaped airport, opened in September 2016. These two alone cost $3.8 billion to complete, according to the government. The king of kings in the white elephant stakes will always be the Avaza resort and waterpark, which cost untold billions and draws almost literally no foreign tourists. Berdymukhamedov dropped by with his numerous grandchildren on October 30 in an attempt to justify the project, but these public relations efforts are growing increasingly hopeless.

Undeterred, the government intends to give in once more to its gigantism mania by rolling another mega-project lacking a clear economic rationale. This time, Berdymukhamedov wants to raise an entire new city from the ground, in the Gokdepe district of Ahal province. On October 31, he reviewed plans for a construction project that will see the creation of up to 235 apartment buildings, a bazaar, a wedding palace, an equestrian complex, a hospital, and, curiously enough, an infectious diseases clinic.

The president vowed “this colossal project will require huge investments, but our state has sufficient economic stability to implement the boldest and large-scale plans for the sake of the nation.” Two smaller villages are also to be constructed nearby.

For those who find soothing comfort in that unhealthy vice, it will perhaps come as some comfort that cigarettes are starting to become more readily available in certain locations. Chronicles of Turkmenistan reported on November 1 that some state-run shops in Lebap province are now selling up to two packs per buyer. Large crowds of smokers apparently gather round the backs of stores every morning in a desperate bid to get their fix. ANT reports that it was around August and September that cigarettes started to disappear from the shelves of state-run stores, although they could be found at much higher prices than usual at privately owned outlets.