The World Health Organization continues to indulge Turkmenistan’s lies about the coronavirus. Our weekly briefing. 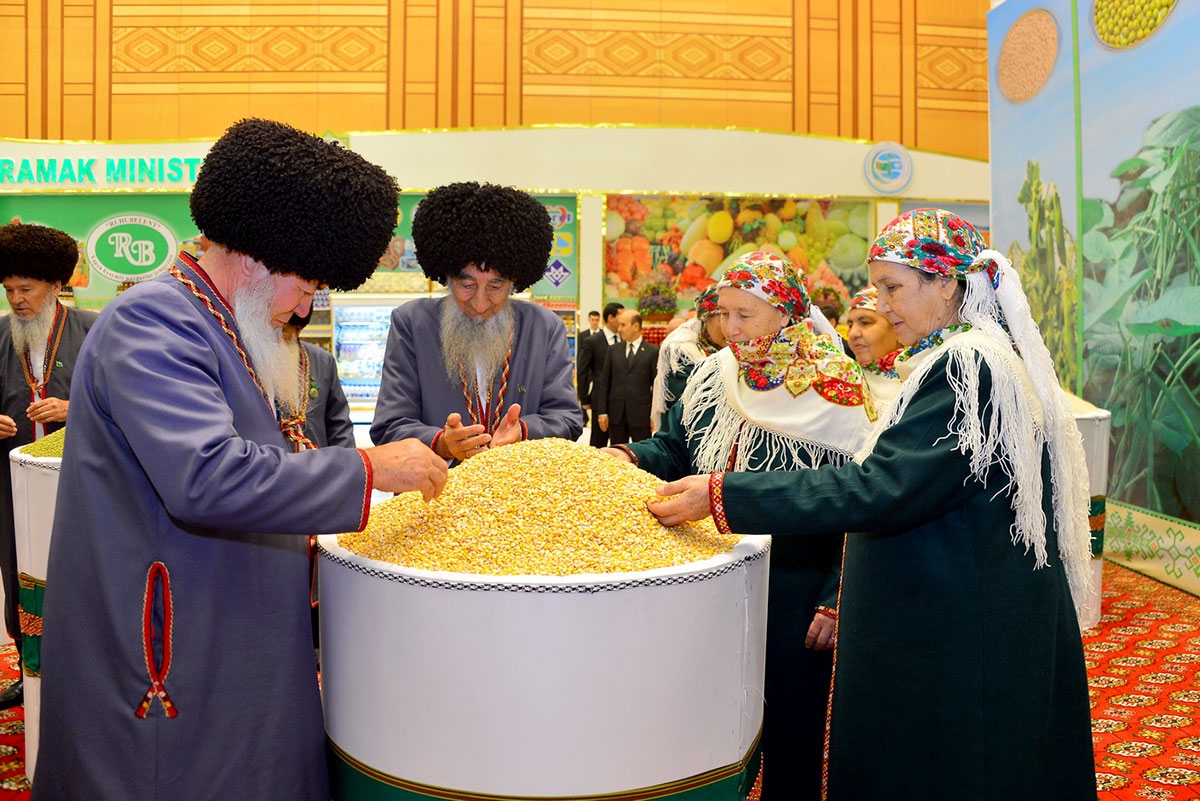 The president of Turkmenistan enjoyed another Idi Amin moment this week.

One memorable highlight of Barbet Schroeder’s 1974 documentary about the notorious Ugandan dictator sees Amin challenging his minions to a swimming race. Predictably enough, despite failing to swim in a straight line, Amin easily beats his accommodating minions.

There were shades of that scene on November 14 as Gurbanguly Berdymukhamedov joined members of his cabinet in kicking about a ball on a futsal pitch in the city of Turkmenbashi. The 64-year-old leader is nobody’s idea of a soccer maestro, but his feeble punts toward goal nevertheless managed on several occasions to crawl into the back of the net. None of the ministers were foolish enough to try and challenge Berdymukhamedov.

If only everything were that easy.

Vienna-based news website Chronicles of Turkmenistan noted in a report published on November 12 that the population’s spending power has deteriorated so badly that stores often have trouble selling perishable foodstuffs before the expiration date. Shop owners quietly sell expired items like butter and yoghurt at slashed prices to acquaintances to avoid health inspectors coming around to fine them.

The website claims in the same article that some people have taken to pilfering metal fences erected around graves from a cemetery in the capital, Ashgabat, to resell for scrap.

The government appears intent on spending its way out of this general malaise. The freshly approved budget for 2022 envisions expenditures of 85.6 billion manat ($24.5 billion at the official exchange rate; around $3.7 billion at the current black market rate). The figure earmarked for 2021 was 79.5 billion manat, $1.8 billion (at the official rate) less than what is being set aside for next year.

A sizeable chunk of government spending ostensibly goes toward public works projects, like the infectious diseases hospital inaugurated in Turkmenbashi on November 10 by Berdymukhamedov’s son and presumed successor, Serdar, the deputy prime minister with the portfolio for economic affairs, banking and liaising with international financial institutions.

An air of cruel irony hung over the ribbon-cutting given that Turkmenistan refuses to acknowledge that it has recorded a single case of the most notorious virus of our times: COVID-19. Serdar Berdymukhamedov was still moved to say in a speech that the fact of the hospital’s construction served as evidence of “the great care demonstrated by the Turkmen leader for the health of the nation.”

The World Health Organization has readily abetted Turkmenistan in sticking to its coronavirus lie and its Europe regional director, Hans Kluge, even took time out of his schedule to attend the opening of the hospital via videoconference. State media cited Kluge as hailing the safety and reliability of Turkmen medical infrastructure.

As Saglyk, a nongovernmental group that uses online resources to spread information about health awareness to Turkmen speakers, has noted, however, it was back in August 2020 that the WHO was promising to help Turkmenistan implement an independent COVID-19 testing program.

“This was the only and the most meaningful promise to the Turkmen public during the whole pandemic. Its fate is still unknown,” Saglyk ruefully observed in a tweet.

Kluge’s brown-nosing may have been the price for earning clearance for a visit from yet another WHO team of experts, which flew into Ashgabat on November 13. The agenda of the mission laughably includes verifying Turkmen compliance with International Health Regulations in its handling of the COVID-19 crisis. An important stipulation of those regulations is that states notify the WHO of instances of, say, a highly contagious virus spreading throughout the country. That is something that Turkmenistan has obviously refused to do.

It is all but impossible because of this secrecy to know at what stage of the COVID-19 crisis Turkmenistan is at. Retailers may be spying some light at the end of the tunnel, though. Amsterdam-based Turkmen.news reported this week that the government has informed the parastatal Union of Industrialists and Entrepreneurs, or UIET, that bazaars and shopping malls closed as a preventative measure should be reopened by December 15.

As Turkmen.news pointed out, the retailers in question were ordered to cease operating in September amid another surge of coronavirus infections. Reopening had been slated for November 1, but that date came and went without any change. Bazaar traders in the city of Turkmenabat were so outraged by this that they marched en masse to the regional government headquarters. RFE/RL’s Turkmen service, Radio Azatlyk, reported that a group of people even blocked a road in the city with demands that they be allowed to return to work. Some days later, on November 5, bus drivers in the same city got in on the act, mounting a strike in protest at coronavirus-related rules limiting the permitted number of passengers to 10.

Berdymukhamedov has had his mind on a bigger picture. Last week, he traveled to Istanbul to take part in the eighth leaders’ summit of the Organization of Turkic States. The meeting of authoritarian presidents was held off the coast of Istanbul on what the Turks have with sublime irony dubbed the Democracy and Freedoms Island. Hungarian Prime Minister Viktor Orban attended as an observer, presumably to make that joke even funnier. 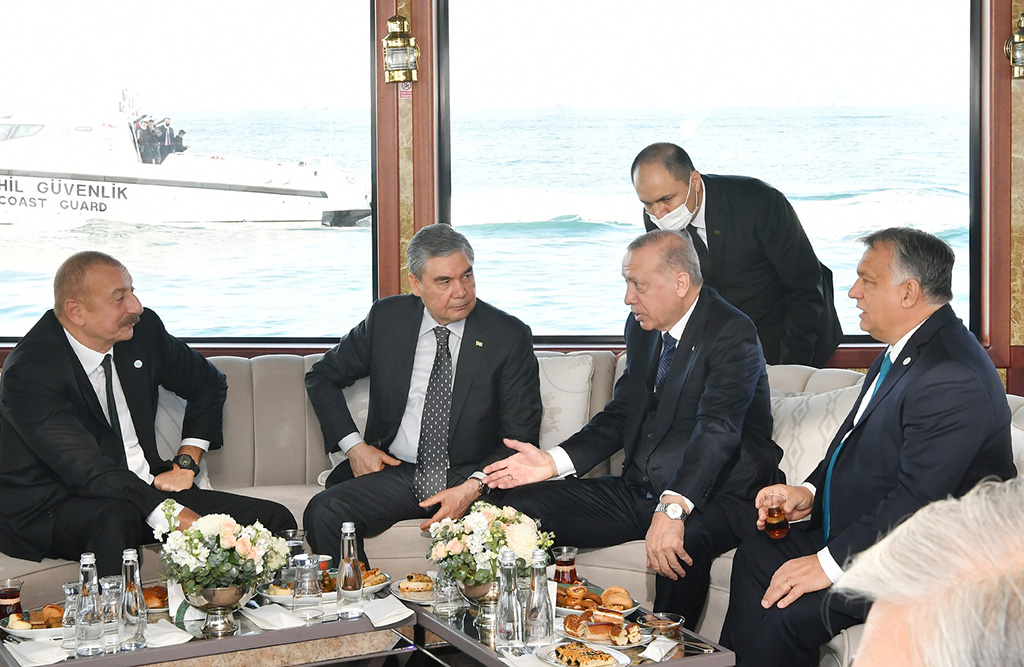 The Turkmen leader seized on the occasion on November 12 to remind listeners of his determination to pursue a diplomatic agenda of broadening trading and energy transport routes. He spoke specifically about “energy systems” bridging the Caspian to Turkey and Europe. He then hopefully namechecked the Saudi-based Islamic Development Bank and the Asian Development Bank as sources for funding any such undertakings.

In the latest grim development in the Turkmen government’s sustained campaign to get its hands on self-exiled critics, Russia last month handed over a man called Azat Isakov, who RFE/RL says has lived in the Moscow region for several years. Russia claims that Isakov left for Turkmenistan of his own volition, which feels implausible, given how Turkmenistan tends to treat opponents of its regime. Opposition activists, meanwhile, are concerned that a grim fate may be awaiting the 37-year-old.