The dauphin of Turkmenistan has valuable new purse-monitoring duties. 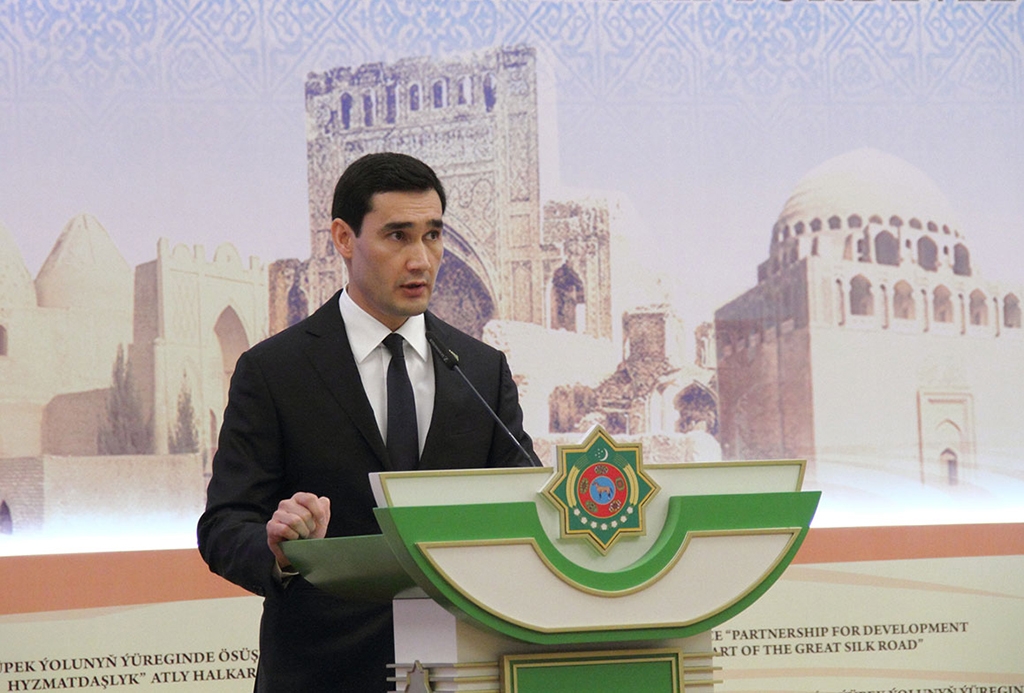 Serdar Berdymukhamedov is joining the exclusive State Security Council for no other obvious reason than that he is the president’s son. (state media handout)

With Turkmenistan and bogus statistics, it’s a case of go big or go bust.

In that spirit, Deputy Prime Minister Gadyrgeldy Mushshikov declared at a February 12 Cabinet meeting devoted to summarizing achievements in 2020 that the economy had grown by 5.9 percent.

For the sake of context, the figure for 2019 was 6.3 percent. So only a 0.4 percent slowdown in growth despite the country being closed off to the world for the best part of the year.

Such ludicrous dissembling puts the likes of the International Monetary Fund in an awkward bind. In its April 2020 report forecasting the global fallout of the then-still-burgeoning pandemic, the IMF happily went along with Turkmenistan’s 6.3 percent figure for 2019, but it predicted only modest 1.8 percent growth in 2020.

How did Turkmenistan supposedly pull off this remarkable feat?

Citing the slew of concocted figures trotted out by officials feels largely pointless, but the short version is that the government has been investing heavily in construction – both housing and industrial. And the country is purportedly turning out ever larger volumes of processed goods, like liquefied gas, lubricants, polyethylene, metal products, and fiberglass pipes. Even sausage-making is on the ascendant, up by 2.2 percent in January, as compared to the same month in 2020.

Is any of this credible though? Just days earlier, President Gurbanguly Berdymukhamedov had been complaining that industrial output has proven a crushing disappointment.

Bombastic projections are being made for this year too. Berdymukhamedov said 40 billion manat has been earmarked for building factories, hospitals, medical centers, schools, government administration facilities and homes. Depending on whether one is using the black market or official rate of conversion, that manat sum amounts to either $1.4 billion or $11.4 billion, respectively.

With this kind of money sloshing around, it is just as well to have a reliable right-hand man counting the pennies.

The 39-year-old, who is widely tipped as a likely successor to his father, was last week given a major promotion in the form of three new jobs. He will serve as deputy prime minister, occupy a seat on the State Security Council and, possibly most importantly at this moment in time, chair the Supreme Control Chamber, a body which oversees government spending. Serdar Berdymukhamedov will, accordingly, relinquish his post as Industry Minister.

A move to the Supreme Control Chamber had been accurately predicted in November by the Amsterdam-based Turkmen.news website.

Much digital ink has been shed suggesting the notion that this major leg-up represents just another stage in the dynastic succession process. Berdymukhamedov senior, 63, may wish to leave office before dying and it only makes sense in an unaccountable dictatorship that he hand over the reins to somebody he trusts implicitly.

For this reason, there had been some speculation that Berdymukhamedov junior might be slotted into a position as speaker of the Senate, which will come into being this year. But keeping a close eye on the books feels like a more pressing priority in the short term.

That apprehension is at unusually high levels among Berdymukhamedov’s inner circle is attested to by the continued and unusually intense barrage of reprimands for key lieutenants. Earlier this month, it was the turn of the managers of the economically crucial energy industry, among others, to feel the sharp edge of the president’s tongue.

The ire has been spreading wider. On February 10, Mushshikov – he of the booming growth figures – was chided for his “weak leadership” and allowing for underperformance in the “finance and economic complex.” The global trend-bucking growth rate of 5.9 percent was not enough, apparently. Finance Minister Mukhammetgeldy Serdarov and Central Bank chairman Merdan Annadurdyev, meanwhile, got their “last warning.”

Annadurdyev has been on thin ice for a while as it happens. This is the first anniversary of him being raked over the coals for “weak management of foreign currency reserves.” That is code for “not enough dollars in the coffers” – always an impressive feat of ineptitude or unbridled kleptomania for an energy resource-rich nation. The national currency is also in a state of disarray, as attested to by the ever-growing gap between the official and unofficial exchange rates alluded to earlier.

Small historical sidenote here: Another official chastised at that February 2020 government meeting was the president’s top advisor on oil and gas issues, Yagshigeldy Kakayev, a man generally recognized to have been one of Turkmenistan’s few legitimately conscientious and competent bureaucrats. Some months after his dressing-down, Kakayev died at the age of 61 with what was reported in independent media as a case of pneumonia, although COVID-19 was just as likely to have been the culprit.

Turkmen state news does not acknowledge bad news, so it glossed over his untimely passing at the time. In some small measure of consolation, parliament has elected to rename the International Oil and Gas University in Ashgabat in honor of this late, one-time deputy prime minister with the portfolio for energy.

The still-living, meanwhile, continue to get rough treatment. Myratgeldi Meredov, the latest person to fill the post of deputy prime minister in charge of the fuel and energy sector, was fired on February 11 for “serious shortcomings in his work.” Meredov has been caught before handing in subpar work. Back in October, he bragged to Berdymukhamedov about a glowing set of oil and gas production figures. An unimpressed president fired back with one of his time-tested reprimands, complaining that “the refining industry, which has been operating at only 40 percent capacity for a long time, is not at the proper level.”

While Serdar Berdymukhamedov’s Supreme Control Chamber gig will give him valuable purse-monitoring duties, his appointment to the State Security Council feels more consequential in succession terms. In principle, none of his other positions give him the default privilege of sitting on this body, meaning that the assignation is explicitly bespoke. State Security Council membership is normally afforded to the president, top security and justice officials, some other senior Cabinet ministers and regional governors. Serdar Berdymukhamedov joins the team for no other obvious reason than that he is the president’s son.

He made his maiden appearance on security council duties on February 15 as his father paid a visit to the Interior Ministry’s Unmanned Aerial Vehicles Center. Once the president was done listening to reports on his government’s advances in drone technology, he posed for TV images while sitting in a Cavalon gyrocopter made by German aircraft manufacturer AutoGyro GmbH. Doing some digging around, a writer for English-language website The Ashgabat Times suggested this was likely the same craft that Turkmenistan bought from AutoGyro’s Russian sales partner in January 2018 for anywhere upward of $160,000.