With hospitals full, things are taking a firmly Darwinian turn. 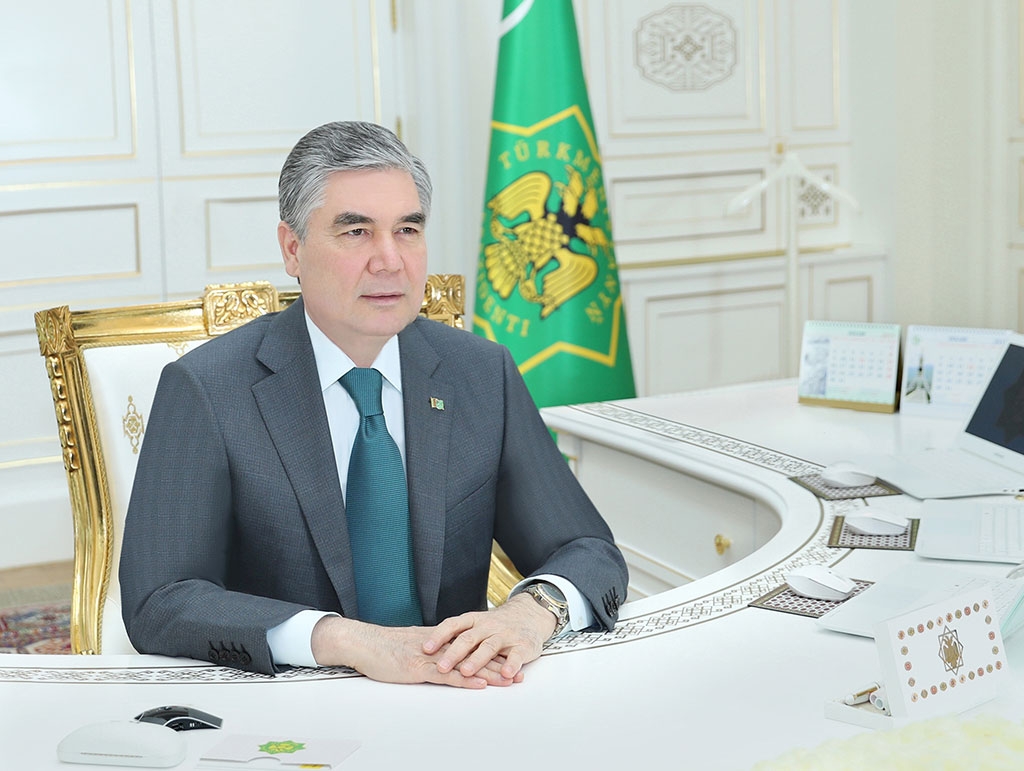 Waiting for a callback (state media)

The president has seized upon the opportunity of the holy holiday of Eid al-Adha, known locally as Kurban Bayram, to make a sustained round of telephone calls to leaders of fellow mainly Muslim nations.

Interlocutors included Saudi Arabian King Salman bin Abdulaziz, who had only just got out of hospital after undergoing a gallbladder operation, and Turkish President Recep Tayyip Erdogan. The leaders of neighboring nations, Afghanistan, Azerbaijan and Iran, were also contacted. And last week, it was the turn of the king of Bahrain, the vice president of the United Arab Emirates, and the crown prince of Abu Dhabi.

Calls are invariably initiated by President Gurbanguly Berdymukhamedov’s office, although state media attempts in unsubtle ways – such as by trumpeting the list of foreign notables sending pro forma regards on the occasion of Eid al-Adha – to suggest it is Turkmenistan that is being eagerly courted. Reading between the lines, however, this aggressive outreach exercise appears more like Berdymukhamedov acting as his country’s salesman-in-chief, pleading for investment and an activization of economic cooperation.

And there are increasingly solid grounds to suspect that Turkmenistan may be angling for more foreign assistance to help cope with the COVID-19 outbreak that the government denies it is experiencing. In the phone call with Erdogan, Berdymukhamedov expressed gratitude for Ankara’s deliveries of medicine and personal protective equipment. The UAE late last month sent 60 tons of critical medical supplies and coronavirus testing kits to Turkmenistan.

News about Turkmenistan’s epidemiological situation arrives only from foreign-based independent media outlets, and the volume of stories has reached disquieting levels. Since the government is clinging to its coronavirus-free fiction, outsiders may only grasp at compelling circumstantial information for a sense of the scale of the crisis.

Amsterdam-based Turkmen.news reported on July 27 on how two clinics in Ashgabat, one of them a cardiology center, have been reformatted into strictly pneumonia-focused facilities. Doctors are struggling and often failing to cope with the volume of demand. The situation in the provinces, where resources are scarcer, is indubitably worse. Turkmen.news cited an unnamed source in the Dashoguz province as saying that in the intensive care unit of a local infectious diseases hospital, six or seven people were being piled into wards designed to hold three people. “People are dying every day,” the source said.

The World Health Organization, which dispatched an expert mission to Turkmenistan last month, told Eurasianet in an emailed statement that it is “aware and concerned about reports of increased cases of acute respiratory disease or pneumonia of unknown cause in Turkmenistan,” but did not dwell on the probability that these reports were ultimately attributable to the spread of the coronavirus. The WHO instead said it is recommending “surveillance and testing systems [be] scaled up, and that samples [be] sent to WHO reference laboratories for confirmed testing.” Ashgabat’s determination to avoid doing this indicates its intent to persist with its regime of secrecy.

There are some things that even the Turkmen government should struggle to hide though. Last month, RFE/RL’s Turkmen service, Radio Azatlyk, published an article about the intense workload of gravediggers, who are operating in what the broadcaster describes grimly as “conveyor belt mode.” No sooner are graves dug that bodies, dutifully wrapped in polyethene sheets, arrive to fill them.

But Azatlyk has reported since then that authorities in the Lebap province have ordered that graves be filled in as flatly as possible, to avoid the mounds normally seen at fresh graves, so as to make them less visible to satellites.

With hospitals long past having overfulfilled capacity, things are taking a firmly Darwinian turn. On July 28, Amsterdam-based Turkmen.news reported on how at an infectious diseases hospital outside Ashgabat, relatives of patients admitted for pneumonia – probably coronavirus-induced – are being made to pay around $56 daily for family members to be linked up to a ventilator. To be clear, this is a bribe, and anybody who cannot afford it is in trouble.

The coronavirus pandemic is even forcing the government to put its long-term industrial plans on hold. The most notable among these being the trans-Afghan TAPI natural gas pipeline. This much was admitted on July 27, during a video-conference meeting of representatives from project participant nations. One conclusion reached during that exchange was that work would be “activated” once the pandemic is over. Since Turkmenistan is so mysterious about its own health crisis, however, it is difficult to understand how anybody will know when and if that has happened.

In the wake of Turkmenistan securing observer status in the World Trade Organization, talk has now turned to pursuing accession. Turkmen officials taking part in consultations with WTO representatives said on July 30 that Ashgabat will capitalize on its observer status to set the stage for future negotiations on membership. Considering how instrumental import-substitution is to Berdymukhamedov’s economic vision for advancing the fortunes of local manufacturers, the prospect of WTO membership feels very remote indeed, unless the government is proposing to undertake some radical reforms.

Back in the real world, though, Turkmenistan remains strongly reliant on imports to keep its food security situation on an even keel. Baku-based Trend news agency on July 30 reported on how Turkmenistan had, in the period from January to May, bought 26,600 tons of potatoes and 3,200 tons of onions and garlic from Eurasian Economic Union member nations. Over that same timeframe, Turkmenistan imported 300,000 tons of milk and cream from Belarus and Russia.

Anywhere else, these figures would read like little more than perfectly healthy and normal trade data, but in Turkmenistan, importing food is taken as a signal of defeat – more so than shortage of food in state stores and in the bazaars, in fact.

In May, Berdymukhamedov talked about how “our country should be self-sufficient in agricultural goods, markets should abound with a variety of groceries that will meet the needs of Turkmenistan.” Since that time, Turkmenistan has been struck by ruinous floods and the COVID-19 pandemic.

And yet still the government is claiming a year of bounty. The state news agency on August 3 claimed that 55,400 tons of potatoes – “much more than last year” – have been harvested this year in the Dashoguz region alone. That amount is neatly an exact 100,000 tons below the 155,400 tons of potatoes that Berdymukhamedov earlier this year decreed should be harvested nationwide.