The president’s latest stunt highlights how Turkmenistan is increasingly devoted to military aviation acquisitions from Italy. Our weekly briefing. 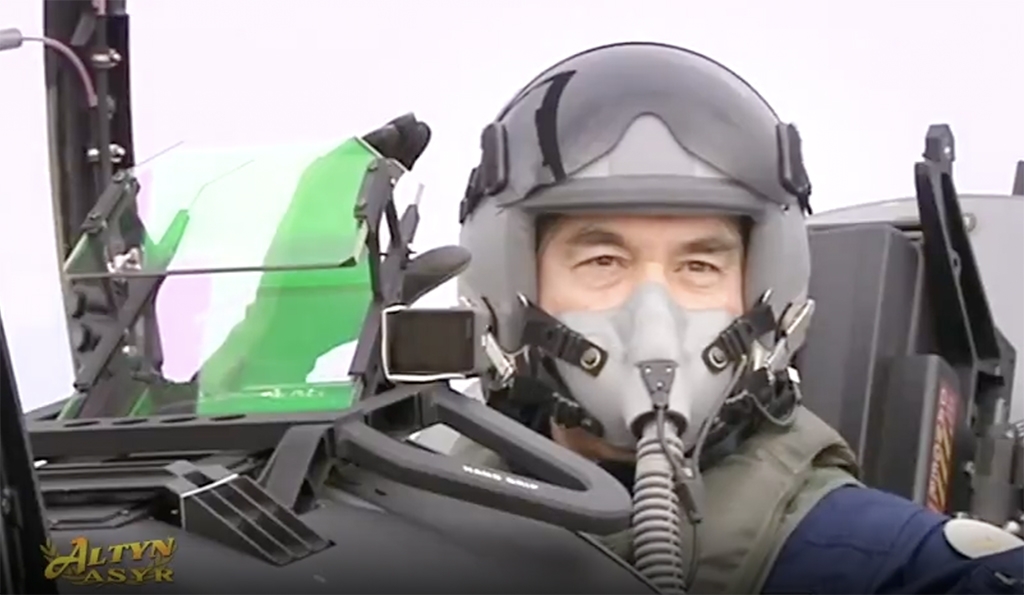 He has raced cars on the edge of fiery craters, gunned down targets while riding a bicycle, and even gathered wheat in a combine harvester.

It was only a matter of time before Turkmenistan’s president took a spin in a fighter jet. And it finally happened – or state media said it did, at any rate – over the weekend.

The stunt has been cast by the state propaganda machine as a hands-on exercise in weapons-testing by Gurbanguly Berdymukhamedov. In its August 2 report on the president’s tour of facilities at a Balkan province base, Neutral Turkmenistan did not specify what planes he was inspecting.

Of the aircraft that he flew, the paper stated only that it was “a fighting machine equipped with modern turbojet engines that can be used, among other things, for training military pilots.” But when Neutral Turkmenistan noted that Berdymukhamedov had flown, as a passenger, in a “supersonic plane,” this put up the backs of military buffs.

The aircraft in question has been identified as an Italian-made Aermacchi M-346 Master, which is in turn modeled on a Russian-designed Yak-130. The jet can fly at maximum velocities of around 1,000 kilometers per hour, more than 200 kilometers per hour short of the speed of sound.

Such pedantry will detract little from how this outing will be used to add further fuel to the deification of Berdymukhamedov. The president’s pilot costume was immediately donated to the museum attached to the Berdymukhamed Annayev Military School, which is named after the leader’s late grandfather, at Defense Minister Begench Gundogdyev’s request. Cadets are already being shown the costume to fill them with inspiration.

What this episode has more usefully documented is how Turkmenistan is increasingly devoted to military aviation acquisitions from Italy.

Turkmenistan’s air force in June took receipt of a number of Leonardo C-27J Spartan tactical transports manufactured by Italy’s Leonardo S.p.A. Specialist publications note, however, that Ashgabat is being circumspect about how many of the planes it bought.

This display of martial preparedness is presumably related to ongoing unrest in neighboring Afghanistan. That issue is likely to occupy a prominent position on the agenda at a consultative summit of Central Asian heads of state being held August 5-6 in the Turkmen resort town of Awaza. It is the third time this Uzbekistan-initiated format is convening – the first occasion was in Nur-Sultan in March 2018, the second in Tashkent in November 2019.

Preparatory talks ahead of the event have been happening between Turkmen and Uzbek officials. Turkmen Deputy Prime Minister Serdar Berdymukhamedov, the president’s son and likely successor, spoke in Ashgabat on August 3 with his Uzbek opposite party, Sardor Umurzakov, about cooperation in the transportation, fuel and energy sectors.

Berdymukhamedov senior has already been in situ in Awaza for a while now and even chaired the July 30 Cabinet meeting there. It was a typically pedestrian affair of bogus statistics and broad pronouncements about the need to do more to develop the country.

Turkmenistan has a severe case of Schrödinger’s COVID-19. The president referred fleetingly at the meeting to the ongoing restrictions in place to prevent the spread of a coronavirus that authorities deny has entered the country. But then he also hinted at the large upcoming celebrations to mark the 30th anniversary of independence.

And as Vienna-based Chronicles of Turkmenistan has noted, the restriction imposed in mid-July on the number of operating train routes, amid what is almost certainly a new surge of cases, may in fact help spread the coronavirus further. Services to some cities have been suspended outright, but trains between Ashgabat and Dashoguz are running just twice weekly, instead of daily, as was the case before. This has led to overflowing trains, with people having to resort to jamming into hot, stuffy corridors – ideal conditions for spreading disease.

Berdymukhamedov spoke briefly in Awaza about sport, and yet failed oddly to mention how Ashgabat-born Polina Guryeva made history on July 27 by winning silver in the women’s 59-kilogram weightlifting category – the first time Turkmenistan has got onto an Olympics medal table.

A fact reported by Amsterdam-based Turkmen.news nods to a troubling possibility. While Turkmen television carried news of the achievement, they failed to mention Guryeva by name and referred to her only as “our sportswoman.” The website’s sources suggested that state media may have been uneasy at the athlete’s Slavic ethnicity.

“Nine Turkmen athletes went to the Tokyo Olympics. Three of them were [ethnic] Russians, and another was an Uzbek. But of course, officials would like the Turkmens to win medals,” one source told Turkmen.news.

The crusade to promote health by prohibition is proceeding apace. Under new government rules, the sale of electronic cigarettes and unfiltered cigarettes is to be banned. Tobacco products will now only be available in “specialized sections of food and non-food stores.” Cigarettes can no longer be placed on display and packaging will feature just the name of the brand in black against a white background.

Turkmenistan is eager to build on its reputation as a smoker-unfriendly land. Ashgabat-based outlet Orient has cited World Health Organization experts as estimating that only 3.4 percent of the Turkmen population uses tobacco. Then again, the WHO refuses to call Turkmenistan out on its flagrant COVID-19 cover-up, so it may not be the most reliable source of information.

There has been more dialogue in recent days – but no firm known outcome yet – on how Turkmenistan and Azerbaijan’s plans for joint development of a long-disputed Caspian gas field latterly redubbed Dostlug, or Friendship, will work in practice. These negotiations are geared toward producing some sort of consequential document to unveil at a three-way summit scheduled to take place on August 6 in Awaza between the presidents of Azerbaijan, Turkey and Turkmenistan.

It is gangbusters on the energy front these days. Interfax news agency reported on July 28, citing state media, that testing at a fresh exploration well in the Malai field in the Lebap province has produced daily flows of 400,000 cubic meters of natural gas. Gas from Malai is used to feed into the Central Asia-China pipeline. The same Interfax report noted that state-owned Turkmengaz’s drilling company has extracted more than 6.1 billion cubic meters of gas in the first half of this year.