Because official statistics are nonsense, we look to personnel reshuffles to understand where the government recognizes it is underperforming. Our weekly briefing. 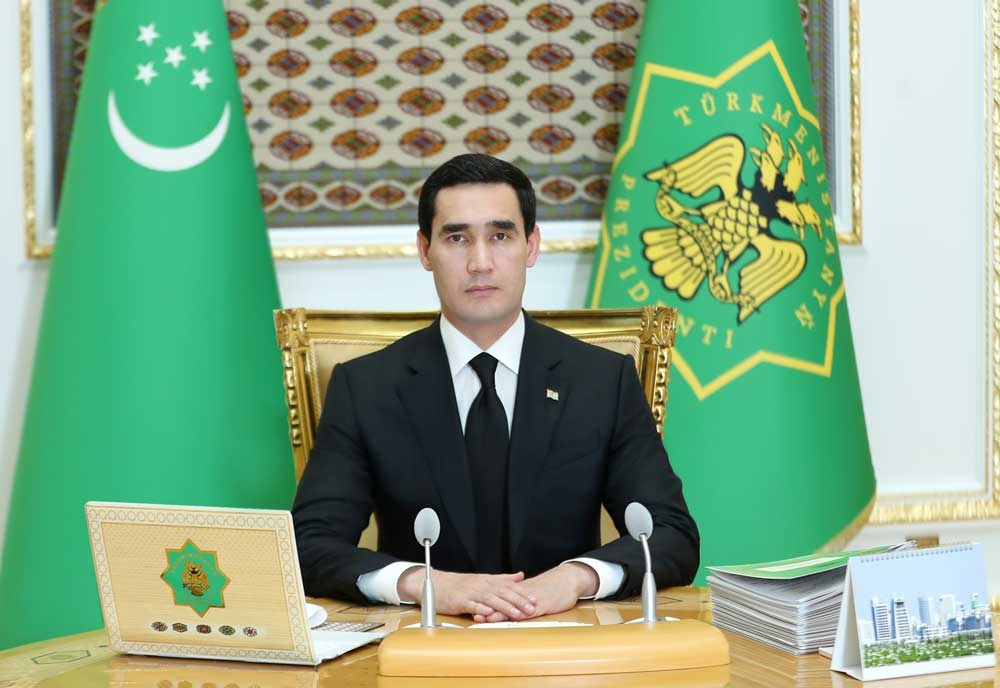 Turkmenistan’s government feels like it needs a break. And it is, as always, getting a long one – the whole month of August, in fact – thanks to the president.

As Serdar Berdymukhamedov informed his underlings at the weekly government meeting on July 8, ministers can take time off from August 1 through to September 1.

They will not be going far though. Ministers will be permitted to holiday at Awaza on the Caspian coast, or at one of a select number of other camps and health resorts inside the country.

Annageldi Yazmyradov, the recently appointed deputy prime minister with the portfolio for agriculture, may only take his vacations once all the cotton has been harvested. That, alas, is only at the end of November.

This collective, self-administered pat on the back arrived following the delivery of mid-year reports on the state of the economy, which were, as always, full of glowing and clearly counterfeited news.

In relatively strict conformity with tradition, gross domestic product expanded by 6 percent year-on-year during the first six months of 2022. (In 2021, the figure was 6.1 percent, a surprising feat in light of the global economic slowdown, as even the then-president had to admit. In 2020, the year that COVID-19 bloomed around the world, causing a total border shutdown in Turkmenistan, the rate was 5.9 percent).

Data on GDP growth and performance in the trade and industrial sectors are such fantastical garbage in Turkmenistan that everybody has long ceased paying attention.

The sensible thing to do is to watch personnel reshuffles and management, since these illustrate more clearly where the government recognizes it is underperforming.

The 6 percent growth news was delivered, for example, by Muhammetguly Mukhammedov, who was appointed in March to the post of deputy prime minister with the portfolio for economic affairs. And as soon as he finished his report to the president, he was summarily dismissed.

Mukhammedov’s replacement will be an experienced, if not necessarily competent, grown-up. Khojamurad Geldimuradov, 57, has served as rector of the Turkmen State Institute of Economics and Management since April 2020. Prior to that, he spent a number of years in the wilderness, including a three-year stint, from 2009 to 2012, as a bookkeeper for a borough administration in the capital, Ashgabat. And yet, in the mid- to late-2000s, he filled some important jobs more in keeping with his new post. In 2007-08, he was the Economy and Finance Minister. Later, he was promoted to a deputy prime minister role. In January 2009, he was let go “for health reasons.” He must be feeling better now.

Berdymukhamedov performed a reasonably major reshuffle last week, a fact that suggests that he intends to follow in traditions of man-management preferred by the former president, his father, Gurbanguly Berdymukhamedov.

Sapardurdy Toyliyev was fired as deputy prime minister with the portfolio for health, education, science and sports. He will be replaced by outgoing Health Minister Nurmuhammet Amannepesov. It looks like Toyliyev is holding onto his other job as president of the Academy of Sciences, though. Amannepesov, meanwhile, will be replaced by the relatively youthful Atageldy Germanov, who was until earlier this year in charge of the orthopedic unit at a hospital in Ashgabat.

Amsterdam-based Turkmen.news gave a full rundown of the rest of the changes, which extended into universities and the diplomatic service. The website added the insight that Berdymukhamedov’s radical reshuffles are in keeping not just with his father, but also the first post-independence Turkmen leader, Saparmurat Niyazov, and that they are likely motivated in part by fears of officials gaining excess influence in their departments by remaining in situ for “too long.”

At a security council meeting on July 5, Berdymukhamedov doled out reprimands. Defense Minister Begench Gundogdyev and the head of the National Security Ministry, the repressor-in-chief, Gurbanmyrat Annayev, were both castigated for “shortcomings in their work.” Firings don’t look imminent for either man, however.

Another institution that Berdymukhamedov intends to preserve jealously is Turkmenistan’s status of permanent neutrality. On July 8, he gave his blessing to the country’s foreign policy posture for 2022-28. The basic thrust is that everything is to remain as before. Rashid Meredov, Turkmenistan’s top diplomat, said this updated foreign policy concept will center, among other things, on expanding partnerships with major international financial and trading institutions – the World Trade Organization, in other words.

One other point of note from the end-of-week government meeting arrived when Berdymukhamedov once more demanded that more be done to get the troubled Garlyk potash ore and mining complex in the Lebap province back on track. The facility was inaugurated by Berdymukhamedov’s father in March 2017, but it has never quite met expectations, because, as the Turkmens insist, the Belarusians who built the plant did not do a satisfactory job.

Turkmen.news reported on July 7, citing classified documents in its possession, that Turkmenistan is now seeking $911 million in damages from Belgorkhimprom, the Belarusian state-owned company responsible for the work. The case is being pursed in the Arbitration Institute of the Stockholm Chamber of Commerce. Ashgabat is paying $9 million in legal fees to U.S. law firm Squire Patton Boggs to fight its corner. It is estimated that the Garlyk plant cost around $1 billion to build.

According to reporting by Turkmen.news, Belarus has filed a counterclaim for $418 million, arguing that it has been paid only $150 million by Turkmenistan for its troubles.

Cooperation with Russia is usually less difficult. The Industry and Construction Ministry has said it will this year buy more than 81,000 tons of rebar from Russia so as to meet the needs of the construction industry, local website Turkmenportal reported on July 8. Demand for this material is strong because Turkmenistan is erecting so many “large industrial and social buildings,” the Ashgabat-based outlet reported.

One major imminent piece of public work is a new 100-kilometer irrigation canal in the Dashoguz province. As Vienna-based Chronicles of Turkmenistan noted in relaying this news, which was divulged via a public tender notice in the state daily Neutral Turkmenistan on July 7, Berdymukhamedov in May grumbled that the governor of Dashoguz was struggling to meet farming production targets because of the poor management of irrigation resources. The province has been suffering from water shortages for three years running, Chronicles noted.