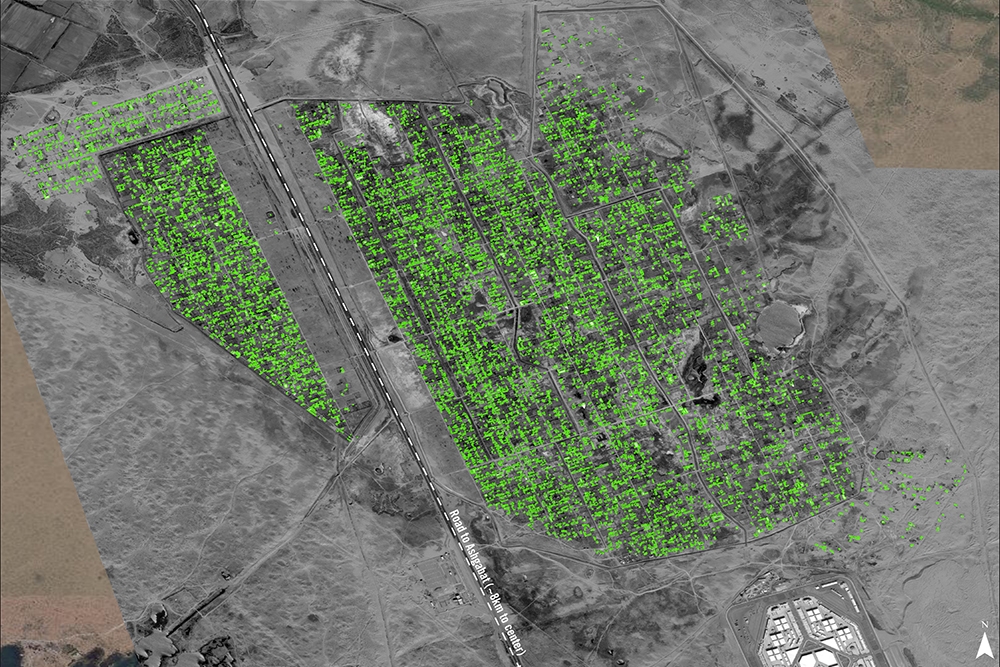 A report by Amnesty International accuses authorities in Turkmenistan of an unprecedented wave of evictions to prepare the capital for hosting a major sporting event in 2017.

The rights group asserted in its findings – published on October 28 in a report titled Deprived of Homes, Deprived of Rights – that the forcible relocation of some 50,000 people is a violation of international law. Amnesty said lack of direct access to Turkmenistan required it to base its investigation on satellite imagery and testimonies from media organizations, as well as telephone interviews with local sources.

Images of the Ashgabat neighborhood of Choganly, which has been the main focus of evictions, show the scale of the work being undertaken. “The total number of plots affected reached 14,000, including at least 10,000 structures,” the Amnesty report noted. “A local observer who visited the site following the start of demolitions estimated that at least 20,000 people had been affected and many residents were still living in ‘ruins.’”

Humanitarian concerns over preparations for the 5th Asian Indoor and Martial Arts Games will only add to budget anxieties that have intensified for Turkmen authorities against the backdrop of a fall in global energy prices.

Choganly is an outlying area of the Turkmen capital near the city’s airport, primarily occupied by dachas, or small cottages. But Amnesty notes that many of the buildings were being used as primary residences.

City officials reportedly gave little notice of planned demolitions and offered no options for alternative accommodation, forcing many to move in with friends and relatives in overcrowded apartments in Ashgabat.

The capital city has experienced a construction boom that started under the rule of the late president, Sapamurat Niyazov, who died suddenly in late 2006. Behind that boom have lain thousands of stories of expropriation and summary evictions.

Residents of Choganly have had it especially bad, and this is only the latest surge of demolitions to affect the neighborhood.

A Human Rights Watch appeal to President Gurbanguly Berdymukhamedov in 2011 highlighted a series of demolitions of dachas and houses in the area in the summer of 2010. “These demolitions were particularly painful for many [Choganly] residents, as they had moved to [Choganly] after having been subject to eviction and demolition of their homes in the Berzenghi neighborhood some 10 years earlier,” HRW executive director Hugh Williamson said in the appeal. “None of them could have expected at the time that their neighborhood would again be demolished.”

Berdymukhamedov offered some sense of the scale of construction for the 2017 games at a speech during the 34th Olympic Council of Asia General Assembly, which was held in Ashgabat on September 15-16.

Completion of the complex will cost $5 billion, cover an area of 157 hectares and host 30 sporting, leisure and cultural venues. The work is being done by the Turkish company Polimeks, which has been behind much of dramatic reinvention of Ashgabat into the marble-clad city it is today. The construction is unfolding in three stages, Berdymukhamedov said.

“All work envisioned by the first stage has been completed. Construction work for the second phase is 95 percent finished, and the building of venues planned for the third phase is 40 percent complete,” he said.

The competition being hosted in Ashgabat used to be a smaller event, but since 2013 the indoor and martial arts disciplines have been merged, requiring more venues and associated expenses. And the 2017 edition will include the first-time participation of 17 countries from Oceania.

Despite dwindling state revenues due to the precipitous decline of energy prices, Turkmen authorities opted in some cases to demolish viable facilities in favor of larger and newer venues. For example, a 30,000-seat stadium that had been used to host World Cup qualifying matches was demolished to make way for a 45,000-seat arena.

Berdymukhamedov emphasized that all work was being done at an urgent pace. The haste would appear to account for the disregard for eviction formalities cited by Amnesty.

The rights group’s report chronicles the plight of one woman in her fifties, identified only as Nadia, who moved to Choganly in 2008, when she was no longer able to live in an apartment block due to infirmity. “She was given a written notification about the forthcoming demolition in late March, on account of the structure being ‘illegal,’” Amnesty reported. “She was given 10 days to remove her belongings and demolish her home herself which she refused to do.”

Reports about state offers of compensation have been mixed over the years. Some who have been evicted to make way for new construction projects have been offered new accommodations of roughly commensurate proportions to their lost property. But many reportedly have been denied compensation. Amnesty said that Nadia was informed that she would not be eligible for compensation, as the land was property of the state.

Given the revenue woes connected to the reduced price for Turkmenistan’s primary export commodity – natural gas – authorities may be looking to curtail state spending in some areas. Relocation expenditures could be a prime target for cutbacks.

Turkmenistan is routinely ranked by watchdog groups as one of the most repressive states on earth. Rights activists have often used the occasion of international events to expose otherwise closed states to outside scrutiny. Yet, there is no evidence that the Turkmen leadership is adopting measures designed to improve its poor rights reputation in advance of the international competition.

“Instead of using the Games as an opportunity to clean up Turkmenistan’s human rights record, local authorities there have only succeeded in worsening living conditions for residents, many of whom had moved to Ashgabat from the countryside in search of work or had already been evicted elsewhere,” Denis Krivosheev, Amnesty’s deputy program director for Europe and Central Asia, said in a statement accompanying the group’s report.

In its recommendations to Turkmenistan’s government, Amnesty urges a halt to future planned evictions in Ashgabat and calls for more consultations between officials and affected communities. “Ensure that any evictions that take place subsequently are implemented as a last resort and are carried out in a reasonable manner and in full compliance with international human rights standards,” the group said.

That sounds unrealistic and optimistic, however. Accounts cited by Amnesty point to unwillingness by authorities to entertain dialogue with the disgruntled and dispossessed in Ashgabat. “According to media reports, on 27 March 2015, a group of women protested against the demolitions during a visit by government officials. During the protest, one of the women felt unwell and lost consciousness,” Amnesty wrote. “By the time the ambulance arrived, she was reportedly already dead.”