Soil degradation, bread shortages and record-breaking temperatures: This and more in our weekly Turkmenistan briefing. 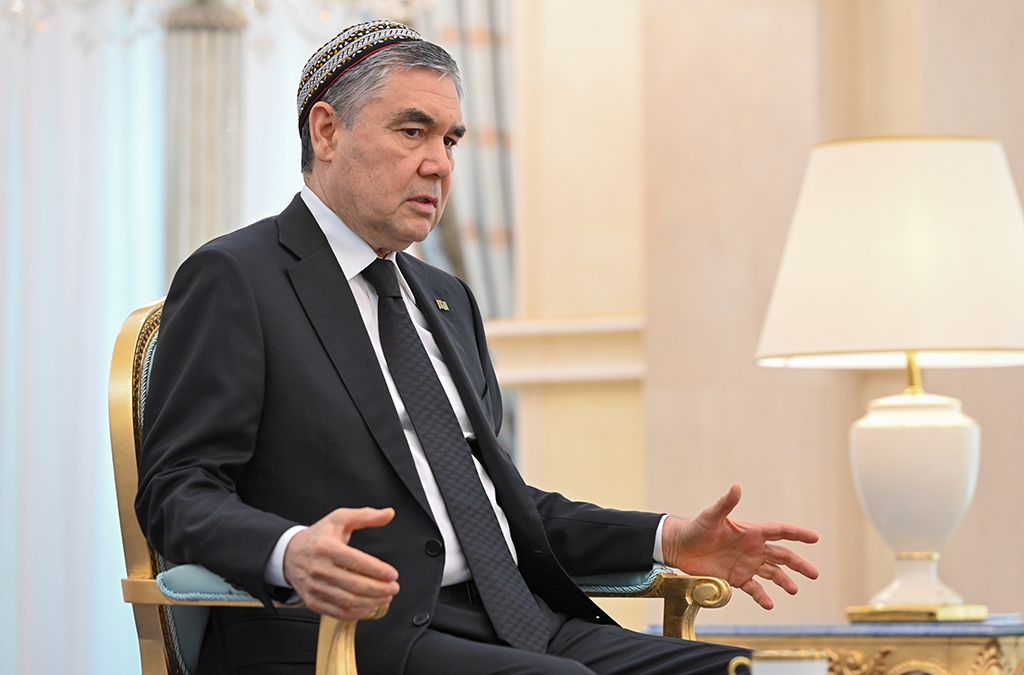 Turkmenistan’s president has granted his second-ever interview to a foreign media outlet – and it was as dull and unrevealing as one could expect, but for one odd detail.

The recipient of this dubious honor was Mir 24, an insipid Euronews clone based out of Moscow whose chairman himself put the questions to Gurbanguly Berdymukhamedov. The questions were read off a script and designed to allow the Turkmen leader to drone on about his government’s triumphs.

Berdymukhamedov has only once before exposed himself to an interview. That was in April 2018, when a correspondent for Russian state television did a 20-minute walk-and-talk with him as a crowd surrounding them incessantly chanted “Arkadag shukhrat!” (Glory to the protector). Arkadag is the state-promoted honorific moniker for Berdymukhamedov. On that occasion, the first question – about how it was that the president happened to be such an accomplished horseman – set the tone for the entire exchange.

That Mir 24 landed the interview, which was aired on May 31, is fruit of the channel’s careful cultivation of Turkmenistan. The station began broadcasting inside the country in December 2020, following a cooperation deal signed with the Turkmen state broadcaster a month earlier. It has since then produced a regular torrent of milquetoast content from the country.

Staying onside, however, means making accommodations. And Mir 24 appears to have agreed to a very strange one for its Berdymukhamedov exclusive, as Vienna-based Chronicles of Turkmenistan spotted. For the entire duration of the interview, a faint blur could be detected around the Turkmen leader’s chin and neck, possibly suggesting that the editors (unclear whose) were trying to disguise awkward evidence of aging. 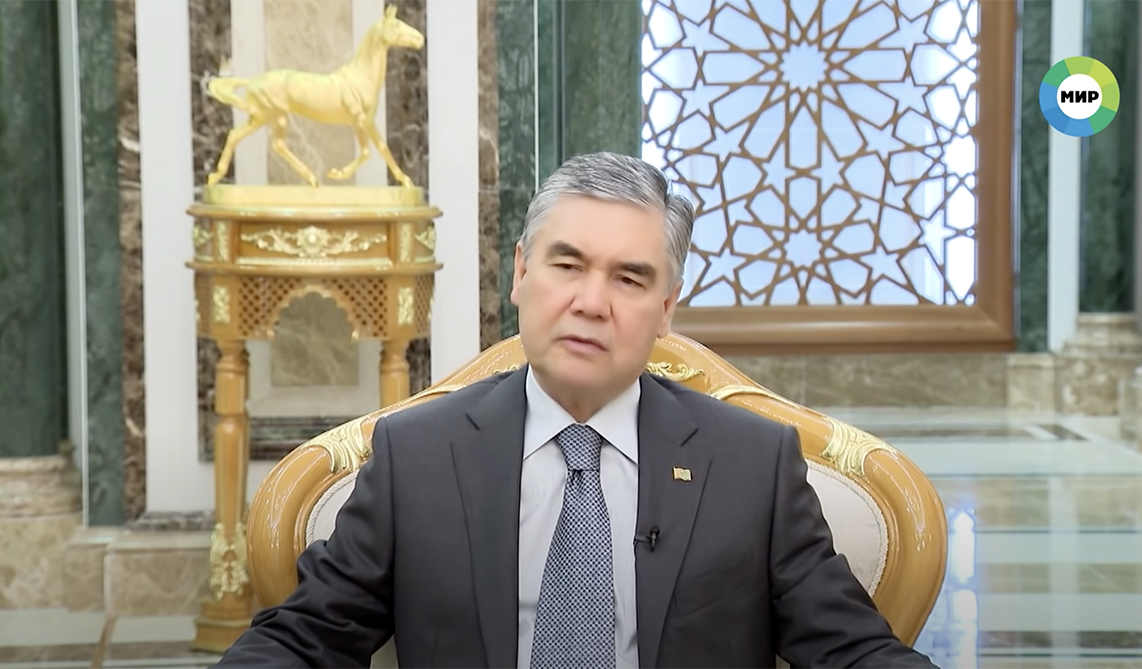 The interview, inasmuch as it had any specific purpose, was intended to cast Berdymukhamedov in the mold of the history-making country-builder. This theme will be relentlessly reprised as and when the president looks to formally end his time in the saddle.

There was more evidence of this narrative on May 25, when Berdymukhamedov laid the foundation for a major new residential complex to be built over 7.5 square kilometers and known as Ashgabat-City. The complex is designed to accommodate up to 100,000 residents, according to state media. This project has been slow in coming online by Turkmen standards. The president was reviewing designs for it back in 2019. It has not been stated when the project is slated for completion.

After the cornerstone-laying event, which is one of a whole raft of events to mark the 140th anniversary of the foundation of Ashgabat, Berdymukhamedov boarded a bus with his inner circle of ministers, who fiercely took notes even as the vehicle was in motion, and headed to Choganly, an Ashgabat residential complex ready for inauguration.

Around 10,000 freestanding homes used to stand in this district until Berdymukhamedov ordered their demolition in 2015. State news talked about only 140 new, two-story homes being built there.

Choganly was once a so-called dacha neighborhood – a settlement of weekend homes that evolved in time to become a full-time residential area particularly prized for the fact that the households had room where to grow their own food. The look of the new Choganly carries more than a shade of the anonymous suburbs depicted in the 2019 psychological horror movie Vivarium.

In the fields, away from these jubilant scenes, the mood is darker. Chronicles reported on May 31 that the wheat harvest in the Akhal province, within which the capital is located, is showing disappointing results. Plant stems stand barely more than 20 centimeters tall and fields are overgrown with weeds, the website cited its sources as saying. Similar complaints are being heard in other parts of the country.

A former agricultural worker contacted by the website has attributed the poor yield to soil degradation and lack of irrigation.

The knock-on effect is bread shortages, which Turkmenistan seems to experience every year. Amsterdam-based Turkmen.news reported on May 28 that deficits for the basic food staple have worsened in the Ashgabat, Balkan and Dashoguz provinces. Privately owned stores are, meanwhile, sticking up their prices for bread. Most Turkmens are reliant on the wares sold by state-subsidized state stores, however.

Even prices for drinking water are ticking upward, Turkmen.news notes. Tap water is not safe for consumption, so buying treated water is the only safe option. This reality must have felt particularly uncomfortable in late May, when Ashgabat saw what weather-focused Russian website Meteozhurnal described as the hottest temperatures recorded for that month in 130 years. On May 30, the thermometer rose to 45.6 degrees Celsius (114 degrees Fahrenheit) – a full 1.1 degrees more than the previous record set in May 1951.

Households in Turkmenabat, the country’s second-largest city, did not even have tap water on May 29, Turkmen.news reported. The utility company did not respond to calls from frustrated ratepayers. In some part of Turkmenabat, even the power was down.

State daily Neutral Turkmenistan advised its readers to ensure, while the weather is this intense, to refrain from eating sweet, fried and fatty foods, and to opt instead for vegetables, fruit, boiled fish, chicken and cold soups.

It might be a slight consolation that the Awaza tourist resort on the Caspian Sea has reopened for business as of June 1. There are rules, though. Holidaymakers must be equipped with documentary evidence that they have been vaccinated against COVID-19. Swimming in the Caspian had been off-limits since mid-May 2020.

Little is known about how the vaccination program is going. The Health and Medical Industry Ministry has said that there are 18 dedicated vaccination points distributed around the health centers in the capital and in the regions. That makes roughly one vaccination-distribution facility for every 300,000 citizens. There is no information about how many people have got a jab so far. A pair of Chinese vaccines and Russia’s Sputnik are the only options known to be available.

Caspian-bound vacationers also need to submit to a COVID-19 test within 72 hours before heading for the summer holidays.

This double layer of precautions is remarkable considering the country insists it has not since the pandemic began recorded a single case of the coronavirus. But this, of course, is a flagrant lie, as is much else that the government claims.