As the president celebrates, the economic crisis deepened by a coronavirus outbreak he has refused to acknowledge has left his people in a state of Dickensian misery. 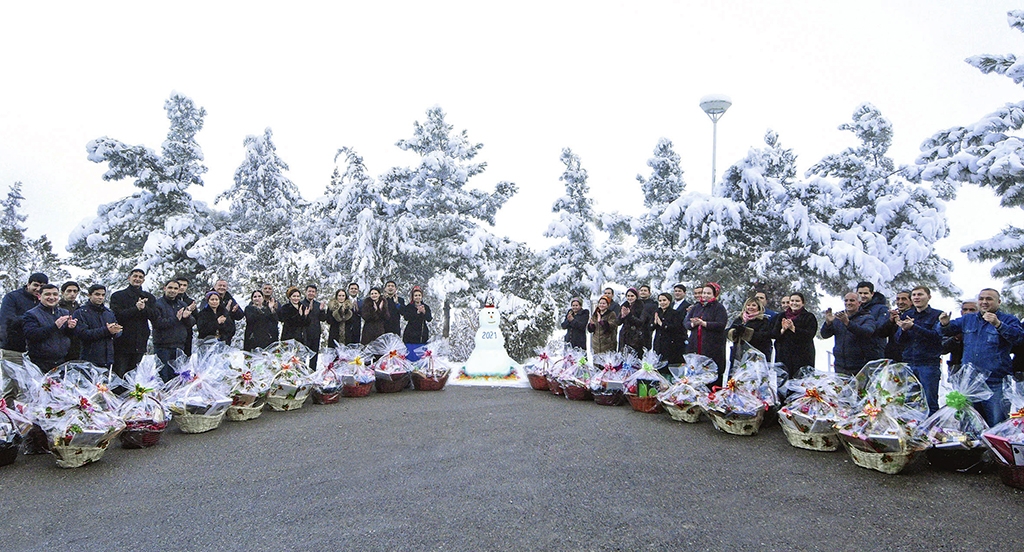 The president's snowman is the only one who gets a hat. (government handout)

New Year’s holidays have been put on hold for most people in Turkmenistan, because of the COVID-19 outbreak that the government denies is happening, but that does not mean the president can’t have some fun.

On December 27, Gurbanguly Berdymukhamedov took a day off to head out with his grandson Kerim to the foothills of the Kopetdag mountains, which has been sprinkled with especially heavy snowfall this year. The sharp winter might seem like a worrying omen for a nation unused to cold, but state media is celebrating the moisture that they predict will ensure bountiful harvests in spring.

“As farmers note, prolonged precipitation is a balm for the soil, which means that one should expect high yields of wheat and other agricultural crops,” TDH news agency remarked. Officials will have fingers crossed that this is true, since the end of December has only seen more of the embarrassing food queues that have been plaguing Turkmenistan for years now.

Kerim, who has turned his hand to songwriting in the past, is now having a go at photography. So as Berdymukhamedov expanded on the marvels of nature while gazing out from a mountain-bound cable car, his scion snapped away on an expensive Canon DSLR.

At the end of their cable car ride, the pair got to building a snowman. Or at least so state television led viewers to believe. Broadcast images only showed Berdymukhamedov putting the final touches to a snowman by inserting a carrot into the face, writing 2021 in marker pen on the figure’s chest and spray-painting circles around its base, as one does. The extensive report on the snowman-building exercise then cut away to almost one full minute of applause by cable car operators, almost all of whom were, unlike Berdymukhamedov and Kerim, not warmed by cozy hats and gloves. 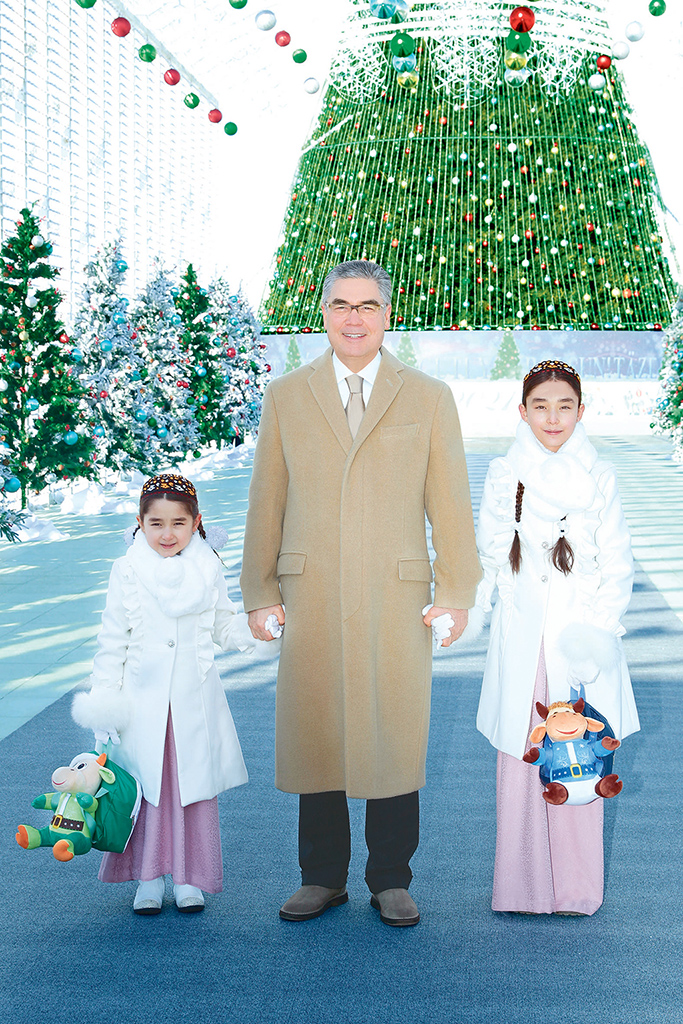 The next day, the president’s two granddaughters got some attention too. The trio descended on the central Ashgabat square where the main New Year tree is always installed and were met by seasonal heroes, Ayaz Baba and his female helper Garpamyk, whose appearance is closely modelled on their Russian analogs, Ded Moroz and Snegurochka. As state media cooed, the decorations created “the extraordinary atmosphere of a magical holiday.” Ayaz Baba is like Santa Claus, but with more bootlicking. So, amid all the merrymaking, he took a moment out to thank Berdymukhamedov for providing Turkmen children with quality education.

As for Turkmen children not directly descended from the president, they must have been naughty this year, because all they are getting in their stockings is a figurative chunk of coal. Amsterdam-based Turkmen.news has reported, for example, that parents in the eastern city of Turkmenabat have had to provide written pledges to schools undertaking to prevent children from visiting neighbors or relatives during the holidays. On December 31, the children are not to be allowed to leave the house after 6 p.m.

Students from at least one lyceum in Ashgabat have confirmed similar restrictions. During the holidays, they are not to leave the province, drive cars, visit bars and restaurants, consume drink and drugs, or use the internet for non-educational purposes. One would have thought much of that was forbidden to them the rest of the time anyway.

In fact, the New Year’s Eve curfew appears to apply to the public across the board. Not that many are in a festive mood. The economic crisis deepened by a coronavirus outbreak the government has refused to acknowledge has left people in a state of Dickensian misery.

“I would have liked to put something special on the table, to give little gifts,” one Turkmenabat resident told Turkmen.news. “But we do not even have money for indispensable things. What holiday is this? My husband, children and I always celebrated New Year’s, but now we cannot even manage to organize a little spread.”

The mission to stamp out good cheer is being actively pursed in some places. RFE/RL’s Turkmen service, Radio Azatlyk, reported on December 25 on how festive trees have not been erected at all in many district centers in the Mary province. As for the tree in Mary city itself, people are reportedly being terrorized, for unclear reasons, into refraining from taking pictures while standing next to it. Anybody breaking this unspoken rule can face on-the-spot cash fines. One young man dressed as Ayaz Baba (or Ded Moroz) was detained at the tree, questioned and then had his costume confiscated.

That holidays were to be called off was already clear a few weeks back. Even local news websites reported on how traditional end-of-year festivities in downtown Ashgabat were being cancelled “due to the epidemiological situation across the world.” Another customary New Year’s Eve party in Ylham park, in front of the circus, was nixed as well. An event to mark the passage into 2021 is, however, to be held for exactly one hour by the country’s main festive tree, between 11 p.m. and midnight on December 31, and involve a select circle of no more than 50 people.

School vacations will be lasting longer than usual this year, from December 28 to January 17, instead of January 12, as usual. Needless to say, no explanation is being given for this decision.

It is obvious that COVID-19 is the reason, though. But no fear, Berdymukhamedov has come up with another solution, further to his earlier advice to ward away dangerous viruses by fumigating homes and offices with a desert plant known locally as yuzarlik (Peganum harmala). Speaking at the December 25 Cabinet meeting, the president talked up the virtues of licorice roots, which he noted people used in antiquity to treat coughs and respiratory diseases. Berdymukhamedov then instructed the Academy of Sciences to conduct more research into the beneficial properties of licorice.

In view of these blistering insights, it comes as a surprise that Turkmenistan all the same last week expressed interest in acquiring an unspecified number of doses of Russia’s Sputnik V vaccine.

So as not to come off like a total Grinch, the government has for weeks been ceaselessly harping on about the free laptops it says it is giving to children across the country. It was the turn of 38,000 first graders in the Mary province this week.

This giveaway is a great boon to a state-run, computer-producing company called Agzybirlik Tilsimaty, which was founded in 2018 and is being touted as a cornerstone of the government’s IT-development agenda. Quite how much of the laptops are made in Turkmenistan is anybody’s guess, however.

Even Agzybirlik Tilsimaty’s website is compelled to reveal that it is a joint venture with two Chinese companies, Hengsheng Lianhua Investment Management and Tongfang HongKong Limited, which are most likely the suppliers of the crucial components. Which makes the great annual computer handout little more than a generous state subsidy for a low-rent, computer assembly plant.