Turkmenistan: In space, nobody can hear you shill

Berdymukhamedov sings his way into 2019, as more Turkmens look for a way out. 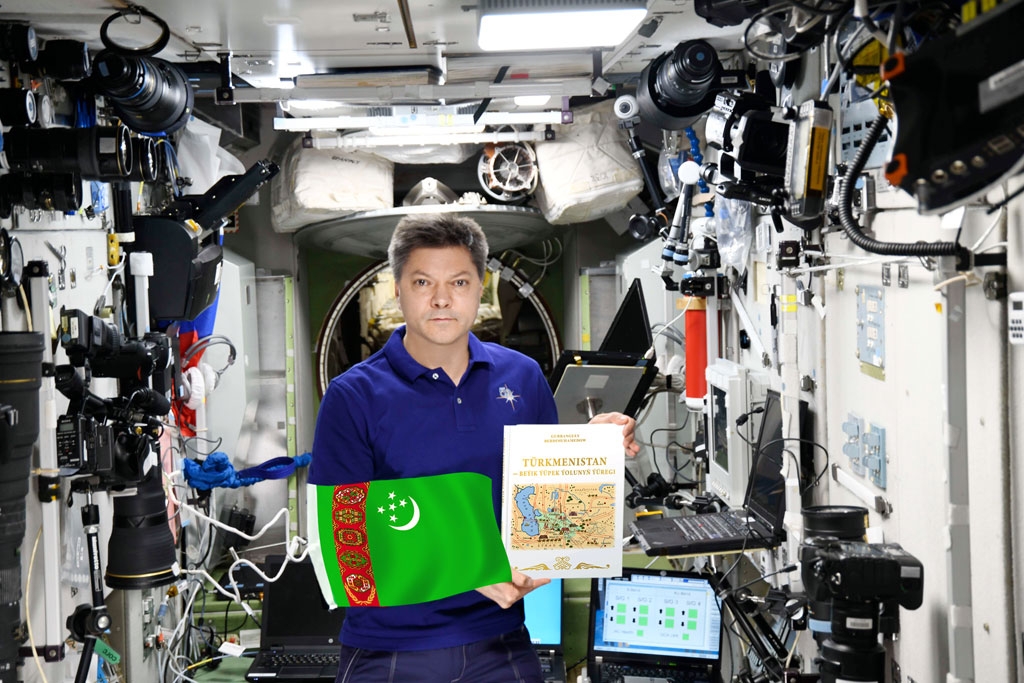 Turkmen state media would have you think the national flag and a book by the president are orbiting our planet. (Turkmenistan State News Agency)

The government of Turkmenistan’s need for validation has now extended to outer space. As the state news agency reported on the final day of 2018, Turkmen-born Russian cosmonaut Oleg Kononeko has taken the national flag and a copy of a book about the Silk Road written by President Gurbanguly Berdymukhamedov up to the International Space Station.

An image showing Kononeko brandishing both those items on the space station looks suspiciously photoshopped, however.

This is yet another of those metaphors that writes itself. Authorities in Turkmenistan routinely prefer show over substance. Words, and even touched-up photos, over deeds.

It was very much in that spirit that Berdymukhamedov treated television viewers to a remarkable divertissement ahead of the New Year. Accompanied by his well-fed grandson, Kerimguly, the president rocked out to a self-penned song. Berdymukhamedov gave the appearance of tinkling the ivories, while Kerimguly sought to recapture the spirit of the 1980s with a turn on the keytar.

For those listening closely, there may have been some diplomatic undertones to the performance. Kerimguly sung his verses in English, which is not too surprising perhaps. But what was more notable was Berdymukhamedov assaying some grammatically creaky German lyrics.

Is this a fresh confirmation of Berdymukhamedov’s rumored Germanophilia? Or is it anything to do with the inchoate rumors about repeated trips by the presidential aircraft to Germany last year, for which no explanation has been offered?

Whatever the president’s interests in Germany, he is evidently eager to keep them from prying eyes. The Vienna-based Chronicles of Turkmenistan has reported that following the progress of Berdymukhamedov’s plane will now become more difficult since tracking information for the aircraft has disappeared from the Flightradar24 flight-tracker website.

What the people are allowed to perceive is the government’s usual bluster about progress. Summarizing the work of past 12 months in the final Cabinet meeting of 2018, Berdymukhamedov concluded that it had been a "good, successful and rich” year.

Perhaps, but RFE/RL's Turkmen service, Radio Azatlyk, has reported on shortages of automobile fuel in the eastern Lebap province. That was despite a government claim that the region’s main refinery had exceeded annual production targets.

At the other end of the country, the western town of Balkanabat has reportedly been experiencing a chronic shortage of cash at ATMs. Similar reports have previously emerged from Lebap and Mary provinces.

Even in the capital, Ashgabat, which typically sees less hardship than the regions, there has been a shortage of basic foodstuffs. Azatlyk said that police officers are having to oversee sales at some leading markets. The officers apparently work in teams, with one keeping an eye on the prices at which goods are sold while another ensures that nobody surreptitiously films or photographs the lines.

Such accounts lend an especially bitter edge to the December 21 vote in the pretend parliament to approve a decree designating 2019 as the year of “Turkmenistan: Motherland of Prosperity.” The signature policy of this incoming year takes effect from day one as Turkmen citizens will as of now be required to pay for heating and other basic utilities.

To that end, the government has been installing gas meters. There may be some delays, however, as the Chronicles of Turkmenistan reported that there were now shortages of such meters as well. But residents will face fines if they are not installed in the new year. Like other goods, they are apparently available at marked-up prices on the black market although for them to be accepted by the state they need to be approved by the state standards agency.

The official designation for 2018 was “Turkmenistan: Heart of the Great Silk Road.” As the name implies, this constituted a series of measures intended to burnish the country’s supposed role as a trade corridor – a tall order for one of the most doggedly impenetrable nations on earth. Nonetheless, the official narrative is that Turkmenistan has made great strides.

Orient, a government-linked outlet, cited the state statistics agency as saying that the volume of cargo transiting through the country doubled year-on-year. This is a dubious claim.

This success was attributed in part to operations along the Kazakhstan-Iran-Turkmenistan railroad opened in late 2014. But even as the Turkmen government was hailing this route, politicians in neighboring Kazakhstan are grumbling. Aikyn Konurov, a member of the lower house of parliament in that country, has argued that the rail route has failed to function as an international trade corridor. He also warned that its prospects for success were gloomy.

According to government projections, the volume of cargo along this route is projected to reach 15 million tons per year by 2022. By our estimates, in the first 10 months [of 2018] the amount of goods carried along the Kazakhstan-Turkmenistan-Iran route was just over 1 million tons,” Konurov was quoted as saying by government daily Kazakhstanskaya Pravda.

And what of that other grand white elephant, the Turkmenbashi International Sea Port? The official Golden Era website provided a glowing account of hive-like, night-and-day activity – goods coming from Spain headed to Uzbekistan, construction materials brought over from Turkey and Russia for local projects, large-diameter pipes for the trans-Afghan pipeline, chemical fertilizer from the Garabogaz plant headed to overseas markets. No firm figures are volunteered, however. And consulting marine-craft-tracking websites speak to a more sleepy pace, at least over the New Year period.

If Turkmens have any views about the questionable success of such costly projects, they are unlikely to share them on social media. That is not least because most of those websites are unreachable due to online censorship. But in another effort at import-substitution of sorts, a local software company in December unveiled the launch of a copy of Facebook, Bizbarde.

Obviously, the purpose of this website will not be to promote public dialogue on anything substantive. The Chronicles of Turkmenistan set up a page on the site, only to be blocked within one day. Turkmenportal points out that three previous such sites have been launched in the past but that all are now offline.

Everybody’s access to information is restricted, but it is worse for some communities, such as Turkmenistan-born ethnic Slavs. One source told Eurasianet that their calls home are tightly monitored by the authorities, even during the holidays.

One of that community's most prominent activists, Anatoly Petrovich Fomin, died on December 23 in Russia’s Saratov Oblast. According to a series of 2009 interviews with the Chronicles of Turkmenistan, he was in effect barred from returning to Turkmenistan.

If Russia is a place of exile for some, it is a haven for others. Azatlyk reported that it is now common to see long lines of Turkmen citizens waiting outside the Russian Embassy to apply for visas.

Even the Turkmen state itself is looking for a sense of reassurance from Russia. As Azatlyk reported on December 26, military officials with the Central Military District – the division in the army that takes the lead on defense cooperation with Central Asia – have revealed that they are resuming training exercises with Turkmenistan and Uzbekistan.

Summing up the year’s activities, Colonel-General Yevgeny Ustinov, the acting commander of the Central Military District, said that 51 training exercises were held together with forces from Central Asia nations, a one-third increase on 2017. No details are forthcoming about the nature of resumed defense cooperation, but the fact is in itself worthy of note.