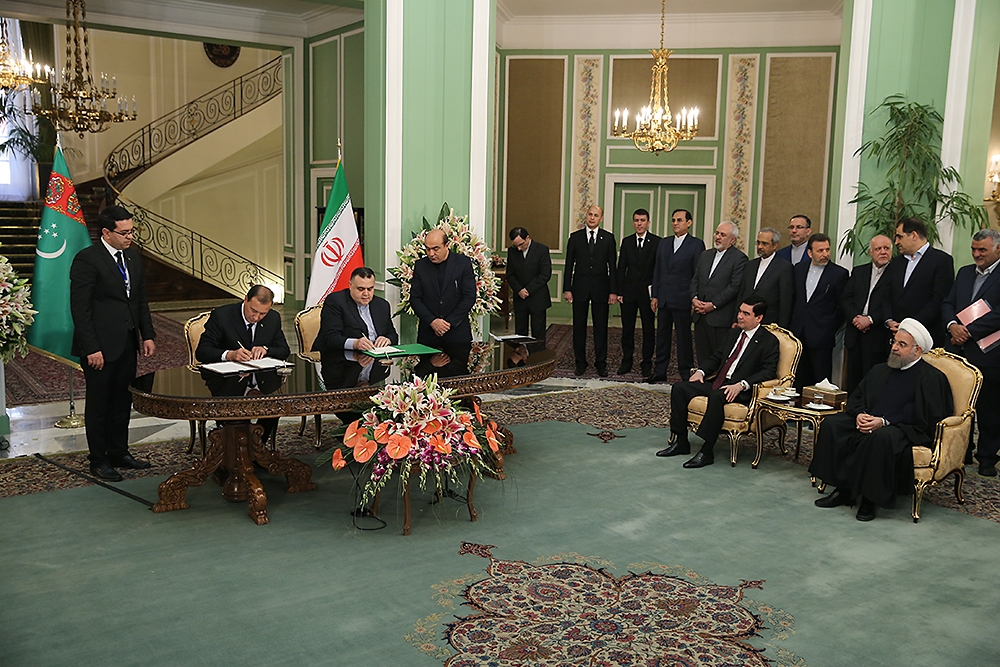 Iranian President Hassan Rouhani (right) and Turkmenistani President Gurbanguly Berdymukhamedov watch their two health ministers sign agreements between the neighboring countries in late November 2015 in Tehran, Iran. The two countries have been actively building their relations the past few years, including recently signing a deal for Turkmenistan to import $2.5 billion worth of engineering goods and services from Iran. (Photo: Iranian Presidential Press Service)

Turkmenistan finds itself isolated of its own volition, Iran through international sanctions. Over the last month, the two countries, which share a 922-kilometer border, have engaged in a flurry of diplomatic and economic activity that should boost bilateral relations.

In late June, Turkmenistan concluded a deal to import $2.5 billion worth of engineering goods and services from Iran, according to a report posted on Iran’s Oil Ministry website. No timeframe or breakdown was provided for the agreement, but this appears to fall into an established pattern.

Recent OPEC figures show that Iran more than doubled its imports of Turkmen natural gas in 2015, up from 4.4 billion cubic meters (bcm) in 2014 to 9 bcm last year. That more than compensated for the drop in Turkmen gas exports to Russia, which reduced the amount of fuel it buys from the Central Asia nation from 6.4 bcm in 2014 to 4 bcm in 2015. At the start of 2016, Russia’s Gazprom stopped importing gas from Turkmenistan altogether, making the Iranian alternative all the more important for Ashgabat.

According to the Iranian Oil Ministry website report published on June 28, Iran proposes over the coming decade to import around $30 billion worth of gas from Turkmenistan, while exporting goods and technical services of a roughly equivalent value. Turkmenistan has historically done barter deals for its gas, although it is not clear from this outline whether that kind of arrangement is being proposed here. Considering current global energy prices, however, the $30 billion figure suggests Tehran intends to continue ramping up the volume of Turkmen gas it imports.

The most recent uptick in bilateral relations began in 2014 with the visit to Turkmenistan by Iranian President Hassan Rouhani, whose pragmatic line has also helped foster a breakthrough in relations with the West.

Iran’s engagement with Central Asia has long attracted scrutiny from regional analysts. In the years after the collapse of the Soviet Union, observers worried about possible attempts by Tehran to steer the newly independent countries of the region into its sphere of influence. But linguistic, cultural and religious differences — not to speak of Iran’s lack of economic clout — ensured that scenario never came to pass.

Relations between Iran and Turkmenistan have been traditionally cordial, at times even amicable. At the same time, the development of bilateral ties has been slowed by each other’s idiosyncrasies, as Sebastien Peyrouse pointed out in his 2012 book Turkmenistan: Strategies of Power, Dilemmas of Development.

“[The late President Saparmurat] Niyazov regularly prevaricated on making a decision concerning export tariffs of gas to Iran, pursued a policy of repression against the Shiite minority, and supported the Taliban regime in Afghanistan,” Peyrouse wrote.

Iran and Turkmenistan appear on paper to be a natural fit as trade partners, although potential has been greatly constrained by international sanctions against Tehran.

Iran’s Deputy Industry Minister Valiollah Afkhamirad visited Turkmenistan in late June and announced that his country’s annual exports to their northern neighbor had reached $1 billion. The ambition is to expand that amount further, he said.

Still, the elephant in the room is that when it comes to both countries most valuable commodity — natural gas — Iran and Turkmenistan are ostensibly potential export rivals. Iran could in principle serve as a transit nation for a Turkmen gas export pipeline directed to Europe, but that hardly services Tehran’s own interests, as Annette Bohr explained in a recent Chatham House report. “Iran has no real interest in re-exporting Turkmen gas, given its own huge reserves located in its southern regions. Consequently, in the long term, Turkmenistan is more likely to view Iran as a competitor for the same gas markets than as a trade facilitator, as witnessed by Iran’s stated interest in building a rival to TAPI that would deliver gas to the Indian subcontinent,” Bohr noted.

But then again, Turkmenistan is fully alive to the fact that it will rely intensely on Iran as a transportation link to the outside world as it tries in piecemeal fashion to diversify its economy away from reliance on the sale of raw energy resources.

The north-south railway corridor connecting Kazakhstan and Iran through Turkmenistan was opened in December 2014 amid talk that it would boost the volume of Central Asia agricultural exports to the Persian Gulf.

There has also been talk of creating an Uzbekistan-Turkmenistan-Iran-Oman transport corridor — a variation on that north-south railway route theme.

This story too is an old one. Turkmenistan pulled out of the Soviet-built Central Asian electricity grid in the 1990s and reoriented its power exports to Iran instead.

And yet, even here, Ashgabat may be a step behind, according to BMI Research. “We expect Iran to remain a net exporter of electricity over the coming decade. As such, Iran's demand for Turkmen power exports will not surge over the coming years — particularly as the country is looking to boost its own gas-fired and renewables generation capacity,” BMI Research concluded in a note written in April.

There is also the prospect of sending power to Turkey, but that would entail negotiation with Tehran. “Power exports to Turkey via Iran would generate export revenues for Turkmenistan, but the cost of Iranian transit fees will need to be established before we can assess the final potential of such exports,” the BMI Research note said.