A “pneumonia” outbreak, more floods and a warm Russian embrace: this and more in our weekly Turkmenistan bulletin. 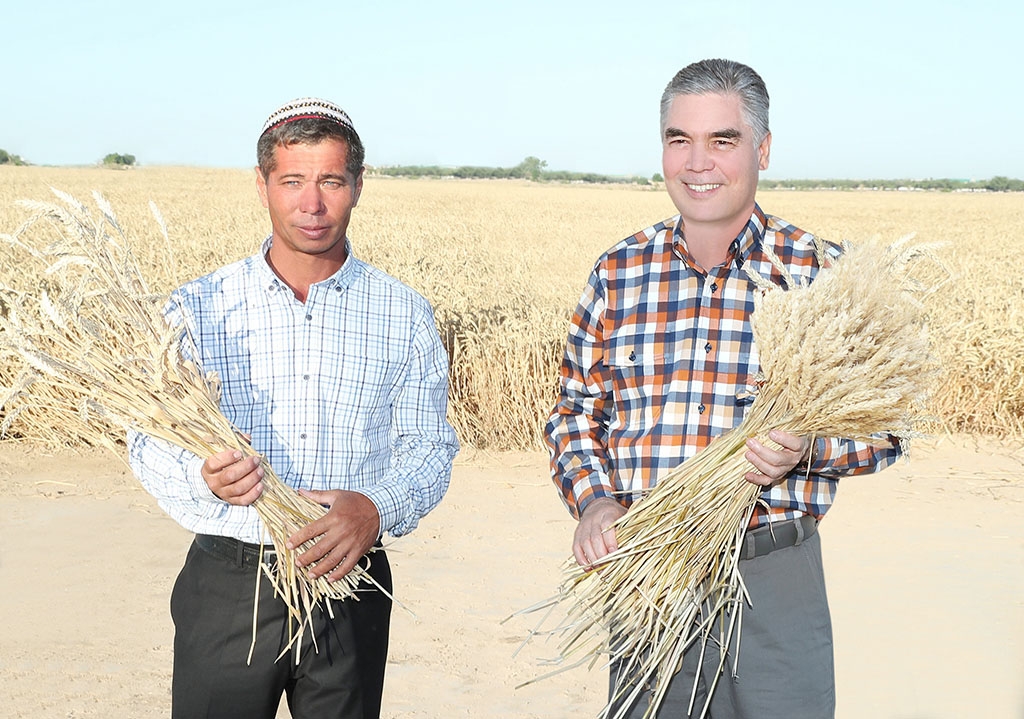 The president as a hands-on manager (state media)

Turkmenistan is in the grip of a pneumonia outbreak.

That, at least, is the anonymous official line being reported by independent media. Official information channels never convey bad news of any kind, be it natural disasters, economic crises or health alarms – all of which are currently afflicting the country.

The precedent of Tajikistan indicates that a surge of hospitalizations attributed to pneumonia is strongly suggestive of the arrival of the coronavirus in Turkmenistan. The government has steadfastly stuck, however, to the line that no cases have yet been detected.

Amsterdam-based website Turkmen.news said on June 15 that there were at least 34 patients diagnosed with acute pneumonia at a regional hospital in Turkmenabat, which is just across the border from Uzbekistan. Unnamed sources cited by the website have described the number of people undergoing observation for pneumonia as unprecedented.

RFE/RL’s Turkmen service, Radio Azatlyk, reported a few days earlier, on June 11, that a worker at a Turkmenabat hospital was diagnosed with a suspected case of COVID-19.

Possibly the main hotspot is in Ashgabat. Azatlyk on June 10 cited its correspondents as saying that an infectious diseases facility in the capital is brimming with suspected acute pneumonia cases. “The doctors already have no doubt that this is coronavirus. But they are not being allowed to do tests or to talk about coronavirus in general. Doctors are advising people to be especially careful with the elderly and to ensure that they do not go walking around,” the broadcaster’s correspondent reported.

Azatlyk has reported some deaths, including some in the city of Dashoguz, which is yet another near-Uzbekistan area but 500 kilometers northwest of Turkmenabat. Establishing the veracity of such claims in the information black box of Turkmenistan is all but impossible, however.

There is still no sign, as of June 16, of the expected World Health Organization technical mission that has been awaited since April. Vienna-based Chronicles of Turkmenistan reported on June 10 that the authorities are pulling out all the stops to present a rosy Potemkin facade of well-furnished medical facilities.

Dashoguz happens to be the latest region visited by President Gurbanguly Berdymukhamedov as part of a tour of the country he has embarked upon this month. His travels appear designed to make him look the hands-on manager while Turkmenistan is in the throes of wheat-harvesting.

On June 9, he dropped by the field of tenant farmer Berdymurat Narmedov in the Lebap province. The very clearly petrified farmer naturally thanked Berdymukhamedov for his support and explained that he expects to yield between 40 and 45 centners (4,000 to 4,500 kilograms) of grain per hectare. Narmedov said his family grows wheat on a 20-hectare plot. The subtext of this scene of the benevolent president counselling his industrious fieldworker is intended as a benchmark for producers nationwide.

It was not all about wheat though. Berdymukhamedov also swung by the nearby Tebigy ekin daikhan farm – this in effect being a latter-day, Soviet-style collective farm – to inspect their vegetables. Targets on foods crops are mercifully not too extravagant, although the farmers might well privately disagree. At Tebigy ekin, the president was told that they intend to grow about 20 tons of potatoes per hectare across an area of 370 hectares. Average potato yields in neighboring Uzbekistan in 2020, just for the sake of regional comparison, were 23 tons per hectare.

The government trumpets its acquisition of high-tech agricultural machinery from global brands like John Deere, New Holland, Claas, Case IH and the familiar Belarusian supplier, Minsk Tractor Works, as key to hitting output targets. The ultimate aim, as the president reminded his attentively listening procession of minions in Lebap, is to ensure that Turkmenistan “be self-sufficient in the production of agricultural products.”

Similar scenes played out in Mary province. Berdymukhamedov wore a slightly different colored check shirt when he went there on June 10, but he heard and said essentially the same things. He headed to Dashoguz province on June 15. 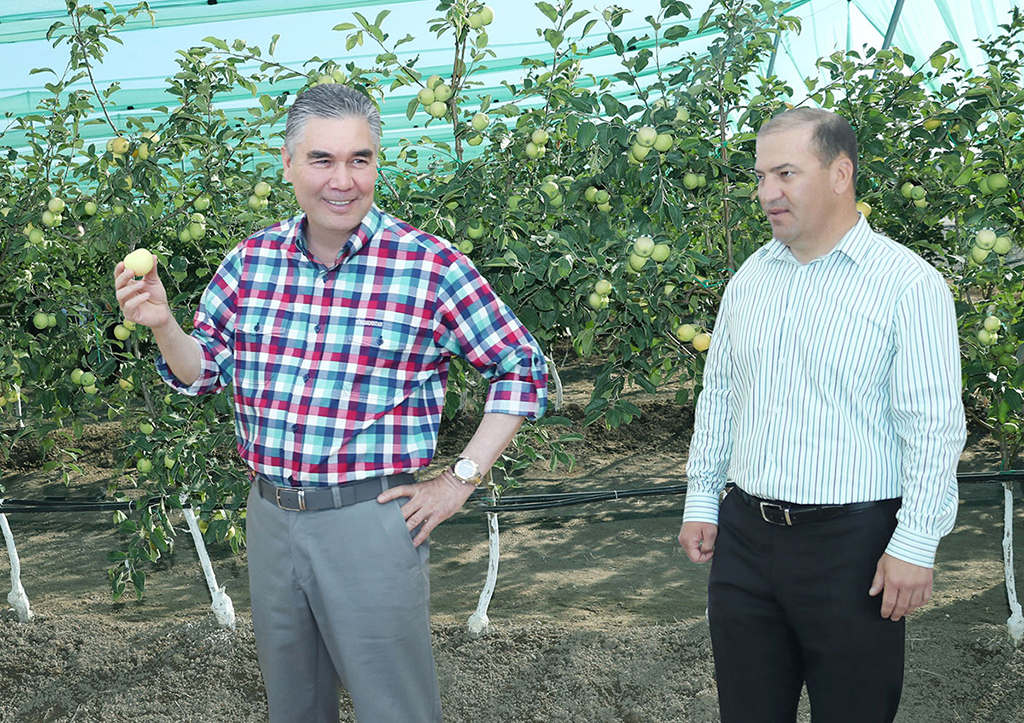 The Mary and Lebap provinces were, by the by, the sites of destructive flooding this past week, not that this made it into any state media reports. Azatlyk cited a correspondent in the Mary province as saying that up to 60 homes were waterlogged in a village called Nychka because of overflowing from the Karakum Canal. Footage of the scenes from one village, uploaded to YouTube on June 12, shows country roads transformed into fast-flowing torrents of brown water. Appeals for assistance clearing the damage have apparently gone unheeded.

As the Turkmen Initiative for Human Rights, or TIHR, and the International Partnership for Human Rights noted in a newly released briefing paper, coverups of such disasters are standard behavior. When members of the public shared photo and video evidence of devastating winds that struck the Lebap and Mary provinces in late April with contacts abroad, retribution was swift. “TIHR learned that more than 60 people were detained on these grounds in the city of Turkmenabat. Most of those detained were released after being questioned and warned that they would be ‘held accountable’ if they did something similar again,” the paper noted.

The world learned some new clues about the state’s cashflow situation courtesy of Russia this week, when Moscow’s ambassador to Ashgabat, Alexander Blokhin, revealed on June 10 that Gazprom paid $300 million for natural gas it purchased from Turkmenistan in 2019. Chronicles did the math and arrived, based on figures provided by Gazprom itself, upon a very modest price of $76 per 1,000 cubic meters. Under a five-year deal signed in July 2019, Gazprom is set to buy 5.5 billion cubic meters of gas annually from Turkmenistan.

Turkmen-Russian ties routinely go through peaks and valleys, but they certainly seem to be on the upswing at the moment. Kremlin spokesman Dmitry Peskov confirmed on June 10, for example, that Berdymukhamedov has committed to attend the postponed Victory Day festivities slated for June 24. This is a small gesture, but significant for a leader who often eschews such large gatherings at which he is bound to be only a bit player.