Ashgabat wants Afghanistan to become part of the global economy. It’s not so keen to bankroll integration, however. 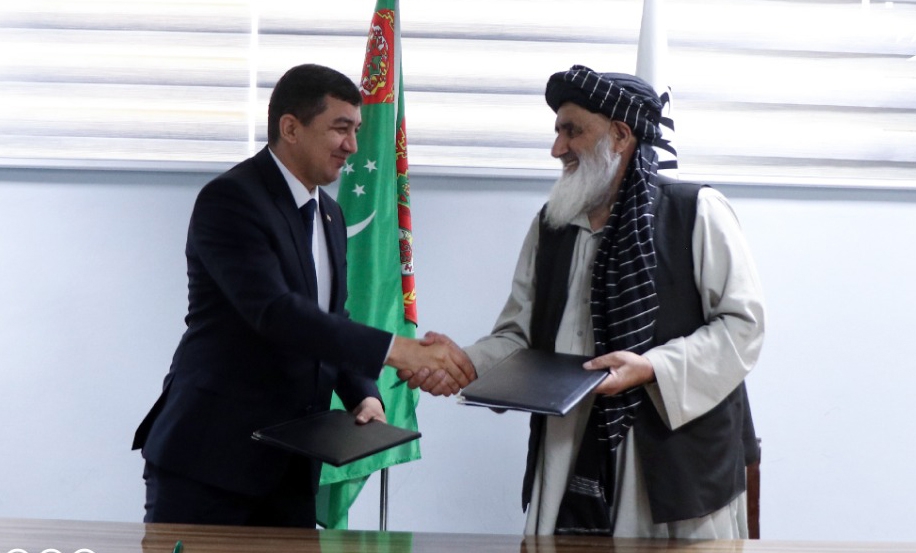 On the subject of the ruling regime in Afghanistan, Turkmenistan is firmly in the dialogue camp.

This point, that the international community needs to find ways to establish lines of communication with the Taliban, was made afresh on July 26 at a Tashkent conference devoted to security and economic development in Afghanistan.

Reintegrating Afghanistan into the global economy, argued Vepa Khadzhiyev, Turkmenistan’s deputy foreign minister, “will have a positive impact on ensuring the security and stability of both the country itself and the region as a whole.”

Khadzhiyev reprised this theme at an inaugural security working group discussion between Turkmenistan and the United States that took place on July 30 at the Foreign Ministry in Ashgabat.

One promising format going forward might be to revive the now-defunct Afghanistan-Turkmenistan-U.S. trilateral meetings, Khadzhiyev said.

In the current context, this is a curious suggestion. When the first of those meetings was held in October 2020, many months before the Taliban took over in Kabul, it was at Washington’s instigation. While Central Asian countries notionally embraced the idea of engaging more deeply with Kabul, not much by way of practical work was being done in that direction. U.S. intent in creating the trilateral format was to encourage the kind of pragmatic conversations that occur in one-on-ones but that were not happening because of a certain listlessness, or maybe even a lack of imagination, within the directly interested governments.

The agenda for the trilateral meetings were strikingly full, ranging from security to energy, trade to transportation, culture to cooperation in humanitarian affairs, and everything else in between.

But that was then, and this is now.

Washington’s stance toward the Taliban has been resolute and absolute: It does not recognize the legitimacy of the self-styled Islamic Emirate, as Afghanistan has been dubbed by its rulers since August 2021. And there are at present no American diplomatic personnel in Afghanistan. The appearance of a U.S.-Afghan Consultative Mechanism, whose creation was announced by U.S. Secretary of State Anthony Blinken on July 28, and its laser focus on women’s rights and political and religious freedoms will hardly inspire much enthusiasm from the Taliban. As to the news from August 1 that the leader of al-Qaeda, Ayman al-Zawahiri, was killed by a U.S. drone strike in central Kabul, that may be added to the pile of irritants.

Undeterred, Turkmenistan appears sincerely committed to the kind of cooperation that will bring some relief to the difficult lives of Afghans.

Khaama Press, a Kabul-based news agency, reported on July 25 that the Taliban government reached a deal with Turkmenistan to import 1,000 tons of liquefied petroleum gas. Taliban officials were quoted as saying this consignment would considerably ease prices for the fuel.

Earlier in July, the Afghan state power company, Da Afghanistan Breshna Sherkat, or DABS, held three days of consultations with Turkmenistan’s power monopoly and Turkish engineering company Calik Holding on ongoing efforts to build TAP, a 500-kilovolt, cross-border transmission line. In January, the same trio agreed to expand an existing substation, Noor-ul-Jahad, so as to boost transmission capacity from 110 kilovolts to 220 kilovolts. DABS said in a statement last month that work on Noor-ul-Jahad was due to commence in a matter of days.

Ashgabat always aspires to have outside assistance, not to say funding, in pursuing this type of initiative. Partners in the Middle East are deemed the most promising, although in truth they have stumped up little so far.

On August 2, Nayef Falah Al-Hajraf, secretary general of the Gulf Cooperation Council, a grouping that comprises Bahrain, Kuwait, Oman, Qatar, Saudi Arabia, and the United Arab Emirates, was in Turkmenistan for talks that concluded with the signing of a memorandum of understanding on future consultations. The Turkmen state news agency described Turkmenistan’s interest in developing ties with Persian Gulf nations as being centered on the goal of increasing cooperation on transport, logistics, and energy issues.

In accordance with custom, the entire government began its one-month summer vacations on August 1.

President Serdar Berdymukhamedov marked this event by taking part in the ceremonial opening of a chalet complex at the Caspian Sea resort of Awaza. News reports gushed that the 48 two-story holiday homes were built to “meet the highest standards of the leisure industry.” Almost nobody but Turkmen nationals is ever likely to see the chalets, though, given that the visa regime remains as intractable as ever.

The opening of the complex was interesting to watch mainly to note the stark difference in presentation style between Berdymukhamedov and his father, Gurbanguly, from whom he took over earlier this year. While the older Berdymukhamedov would almost have certainly arrived in a jogging suit and then engaged in some leisurely antics, the son spent the entire day in his signature black suit and rarely broke a smile.

Even the vacations aren’t going to be fun all the way. At a Cabinet meeting on July 29, Berdymukhamedov noted that while officials would be getting time off, a number of “important events” are taking place in August, meaning that they will have to break off their vacations.

These will include an August 8 foundation-laying ceremony for a project to build a road bridge running west of the Garabogaz gulf, the location of the westernmost point of the border between Turkmenistan and Kazakhstan. That work is set to be done by Ukrainian infrastructure builder Altcom. On August 15-16, an international conference of transport ministers from landlocked countries is to take place in Turkmenistan. That will require the said Turkmen minister to leave the seaside so he can talk with his foreign colleagues about the difficulties entailed in getting to the sea.

And the imminent summer break season certainly didn’t cheer Berdymukhamedov sufficiently to deter him from yet another round of harsh personnel management.

At the July 30 meeting of national security officials, he doled out two reprimands. One was for Interior Minister Mukhammet Khydyrov "for improper performance of official duties." It was worse for Maksat Khudaikuliyev, head of the customs service, who was given a “final warning to correct his shortcomings as soon as possible.”

A day earlier, the president chided Myahrigemal Mammedova, the deputy prime minister with the portfolio for culture and media. That same day, Berdymukhamedov fired Shirgeldi Ishanguliyev as head of Turkmenistan, one of a handful of state TV channels, for “serious shortcomings in his work.

Berdymukhamedov, like his father before, appears perennially dissatisfied with the state of the domestic television industry, although it is anybody’s guess what it is that he expects of it. Its primary function at present is to praise the president day and night. That it does with enthusiasm.