Turkmenistan: Keeping it in the family

The former president ended 2022 in the spotlight: He got a new city named in his honor, his poem set to music by his grandson on state television, and compliments from Russia. Our weekly Turkmenistan briefing. 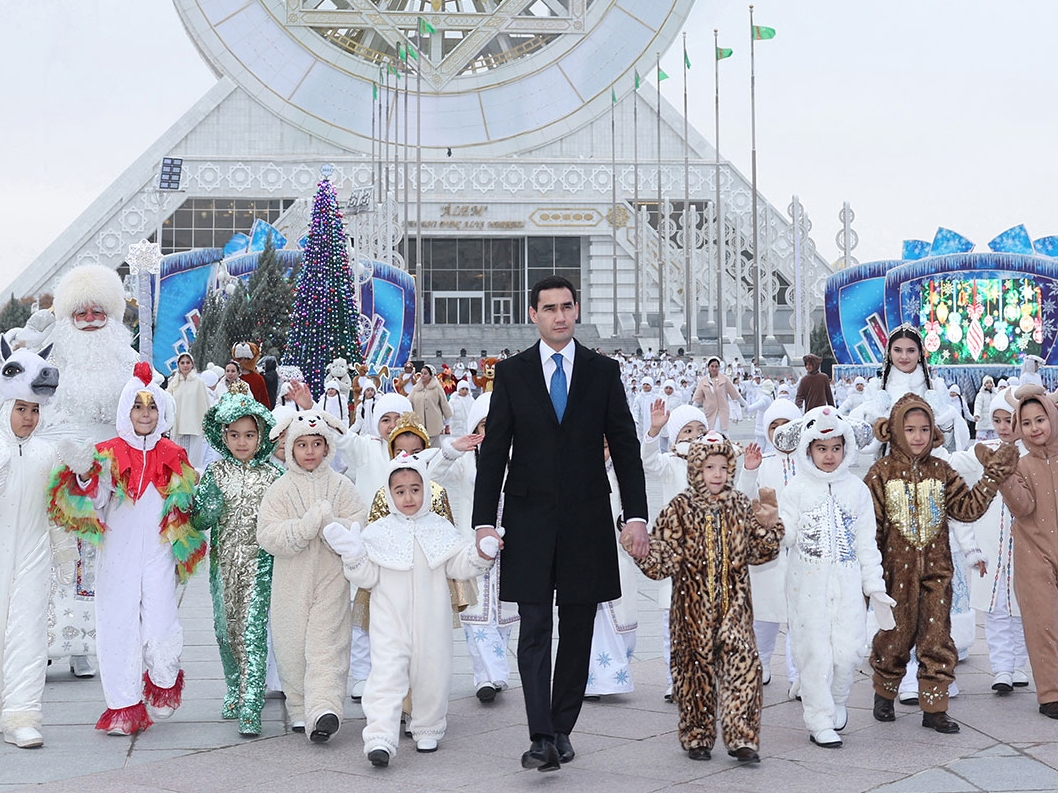 In the name of the father (government handout)

As expected, a new city built to serve as the capital of the Ahal province is to bear the name of Arkadag, the honorific title bestowed upon the ex-head of state and current speaker of the Senate, Gurbanguly Berdymukhamedov.

The naming was rubber-stamped on December 21 by the ersatz parliament for the sake of appearance, but that was mere theater.

Arkadag lies just 30 kilometers southwest of the country’s capital, Ashgabat, and occupies around 24 square kilometers of land. Berdymukhamedov, who is very much eager to see himself cast in the mold of a latter-day Harun al-Rashid, has ordained that Arkadag must, like himself, presumably, be “smart.”

To that end, fully 106 kilometers of fiber-optic communication cables have been laid down across the city to enable all its residents to “simultaneously use high-speed internet,” as the head of the state telecommunications agency, Khadzhimyrat Khudaiguliyev, told a December 21 cabinet meeting. This may be a feeble boast, though, since the Turkmen authorities have spent much of the past couple of years throttling access to whole swathes of online space and appear intent to go further down that road in future.

More on-brand is the pledge that Arkadag’s smart features will include a vast array of surveillance cameras to keep an eye around the clock on residential buildings, government offices, and streets. The city’s control center will also keep tabs on how much water and natural gas households are using.

The whole thing has a strong whiff of Chinese Communist Party digital panopticism about it. Sure enough, Chinese tech companies are deeply invested in bringing about Berdymukhamedov’s half-formed fantasies of putting Turkmenistan at the vanguard of digital living. Huawei’s Turkmenistan country director, Chao Long, told the Neutral Turkmenistan daily newspaper in November that his company will be responsible for installing Turkmenistan’s 5G grid – the one that will be needed to make Arkadag’s intelligent traffic lights, and perhaps even driverless cars, a reality.

It will be a little longer before any of this can happen though. Things have not gone quite to plan. It was evident from Berdymukhamedov’ countless incitements to haste throughout 2022 that it was hoped that Arkadag would be unveiled as a working concern in time for the New Year, but that date has now been pushed back.

Berdymukhamedov’s hypertrophic self-conceit had to be sated in other, more modest, ways instead. On December 28, state television reported on how the former president’s most recent poem – title “Let the world be endless” – has been put to music by his own grandson, Kerim, who is in turn the son of the current president, Serdar. The song that this collaboration contrived was performed at a New Year’s celebration held at a winter sports complex in Ashgabat and aired in full on the national evening news. Berdymukhamedov had read the verses in public a few days earlier while touring the new city named after him.

While those official New Year festivities were executed in uber-controlled conditions, there was a burst of more genuine human emotion elsewhere in the capital on December 27 at a concert by Azeri-Russian popular singer Jony (or perhaps Johnny, since he was thus nicknamed in childhood for his love of the Cartoon Network character Johnny Bravo). At one point in the performance, a young woman rushed onto the stage and hugged Jony before being quickly escorted away by security. Footage of the incident quickly circulated online. Anywhere else, this might have gone down as a trivial episode of a young person overcome by emotion at seeing an idol in person, but this is Berdymukhamedov’s Turkmenistan. Vienna-based Chronicles of Turkmenistan has reported that the woman, a second-year student at the State Financial Institute has been expelled for “inappropriate behavior” and has been sentenced to serve 15 days in jail.

Jony himself is unlikely to come to her defense since he is shaping up early in his career to be a sycophant balladeer to the dictators. In an interview granted after his concert in Ashgabat, he told a journalist it would be “just super-great” if his music might, one day, become as good as that of the “respected Arkadag."

“And if we wrote a song together, I would just be crazy happy,” he continued.

Russia has decided to start 2023 with some intense brown-nosing of the regime in Ashgabat.

In late December, Moscow’s ambassador to Ashgabat, Alexander Blokhin, made a note of talking up Arkadag and complimenting city builders on how masterfully they had married innovative technologies and modern environmental standards. He then followed by suggesting none of it could have happened without Russia’s input toward forming Turkmenistan’s engineer class. After all, around 30,000 Turkmen nationals are studying in Russian universities – 3,000 of them free of charge – at this very moment, Blokhin said at an urban planning forum on December 29.

In his New Year greeting to President Serdar Berdymukhamedov, the now-chronically isolated leader of Russia, Vladimir Putin, expressed optimism that the two countries would continue to build on a pledge to deepen their strategic partnership that the Turkmen president made when visiting Moscow in June. Just to drive home the point that these were not empty end-of-year blandishments, Russia’s prime minister followed up with a note voicing confidence that Russia and Turkmenistan would in 2023 “launch new promising projects and initiatives.”

Turkmenistan is an important lynchpin for Russia as Moscow intensifies its efforts to pivot trade southward, to India in particular. TASS news agency reported on December 30 that Russian Railways and its Turkmen analogue, Turkmendemiryollary, have signed a cooperation pact for the period covering 2023-25. The report cites a Russian Railways official as saying his company will offer training, assistance in developing logistical capacity on the North-South transport corridor – which essentially grants Russia more access to the Indian Ocean via Iran – and help in electrifying Turkmenistan’s railway network.

The early fruits of this deepening cooperation are already being seen in the growing volume of traffic from north to south. Russian Railways announced on December 28 that it had dispatched 52 containers from Karelia, up by the Finnish border, to the Indian port of Chennai, via Kazakhstan, Turkmenistan and Iran. The coming year will see more of this kind of thing, and Turkmenistan will make much of how the flow of goods attests to its importance as a logistical hub.

Turkmenistan’s year will begin, however, with a Chinese flavor. The Foreign Ministry in Beijing has said in a statement that it is expecting a state visit from President Berdymukhamedov on January 5-6. The specifics of the agenda have yet to be announced.