Micromanaging the lives of women and students, Chinese defense cooperation, and still yearning for a trans-Caspian pipeline. Our weekly briefing.

Akhal-Teke: A Turkmenistan Bulletin May 3, 2022 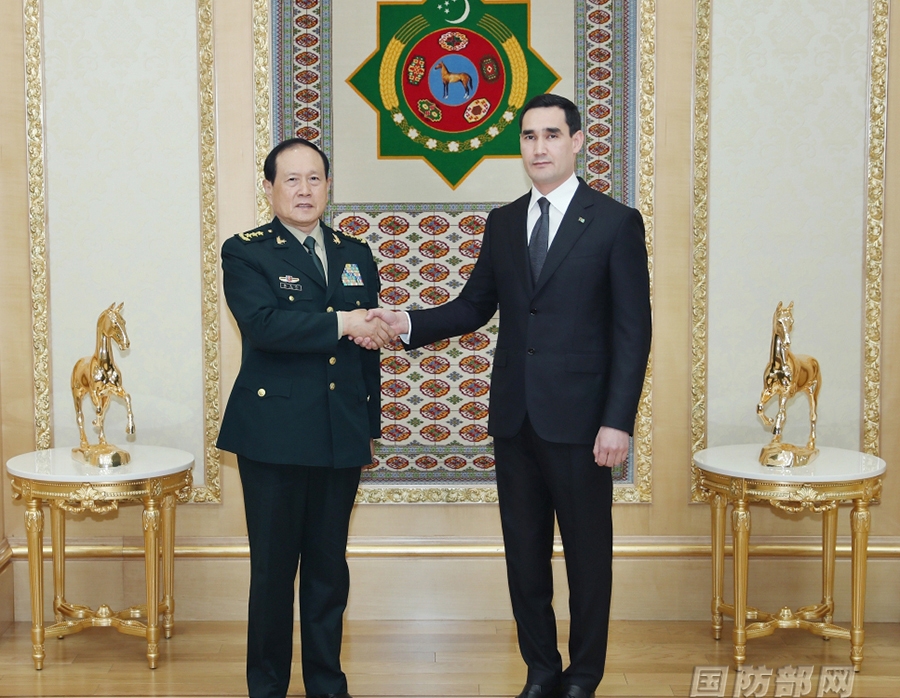 Turkmenistan’s new president is going to be a micro-manager, just like his father.

At a Cabinet meeting on April 29, one of the key issues that Serdar Berdymukhamedov, the country’s most powerful man, chose to dwell on was the state of the roads in the capital, Ashgabat.

There are dead trees in city squares and along the streets, he complained. And public transport is not up to scratch. Also, some buildings need to be spruced up.

The regime appears intent on perpetuating the practice of delving into the most minute aspects of people’s lives. Amsterdam-based Turkmen.news reported on April 26 that several of its sources in Ashgabat have relayed claims that women are being banned from sitting in the front seat of cars. When traffic police are asked for an explanation for this alleged ban, they simply answer: “It’s not allowed,” the website reported.

There is no clarity as to where this directive is coming from or how far it has spread, but there is something a little hypocritical about it anyway, since some may remember that Berdymukhamedov turned up to vote at the February 22 election with his wife in the passenger seat of the family Lada.

Turkmen.news points to other markedly anti-female measures adopted of late. In April, the website reported on a ban on a range of activities in beauty salons as, apparently, these require the insertion of “foreign objects” into the body. RFE/RL’s Turkmen service had reported earlier that law enforcement personnel in the Mary province were handing out fines to cosmeticians offering Botox injections, eyelash extensions, and false nails, ostensibly over health concerns. One beauty salon worker said on condition of anonymity that perceived transgressors – of a code that no police officer has been able to present – are also threatened with up to 15 days in jail.

The total control mindset is naturally most laser-focused when directed at young people hoping to get an education abroad. Vienna-based Chronicles of Turkmenistan reported on April 27 that the Education Ministry is again seeking to limit the number of applicants to secondary and higher education institutions abroad.

In 2019, reports emerged of how the same ministry had compiled a list of around 200 foreign universities whose diplomas would be recognized inside the country. The colleges were almost entirely in politically dependable places like China, Russia, Turkey and India. Studies at a tiny number of colleges in Belarus, Kazakhstan and Georgia were likewise deemed acceptable. (Chinese officials revealed this week that there are more than 1,400 Turkmen nationals currently pursuing their studies in their country).

Another powerful inducement to refrain from enrolling in non-sanctioned universities was that only students at the authorized colleges were eligible to receive money transfers from home at the official currency exchange rate of 3.51 manat to the dollar. In the real-life black market, the manat trades at closer to 20 against the dollar.

Even this has not been deemed enough, however. Chronicles has reported that people aspiring to study abroad will from mid-June have to undergo questioning from officers with the National Security Ministry and the office of the General Prosecutor. To add insult to injury, parents of the applicants are also being given to understand that a $5,000 bribe is required if they are to get the green light, Chronicles claimed.

Against this backdrop, there will be no surprise to learn that cyber-censors have banned yet another medium for communication. Turkmen.news reported on April 29 that the Discord messaging and group call app has stopped working without a VPN. The program is most popular among gamers, mainly because of its screen-sharing function, so this feels like just another measure aimed to keep tabs on the young.

Choking the internet is for all ages, however. As Turkmen.news observed last month, state censors may now be resorting to blocking entire subdivisions of IP networks as a way to thwart VPN users, which has at times had the unfortunate side-effect of knocking out the internet as a whole for days on end.

Turkmenistan’s internet policies are coming to look increasingly like those enacted by authorities in Beijing, so it was fitting that Chinese Defense Minister Wei Fenghe should have visited Ashgabat on April 26. Wei met with President Berdymukhamedov and his Turkmen counterpart, Begench Gundogdyev. The Chinese Defense Ministry’s English-language statement on this visit was boiler-plate fare about the need to “maintain strategic communication” and “strengthen cooperation in counter-terrorism and equipment technology.” These last points could well be allusions to the aforementioned internet censorship measures.

For all its blandness, though, the Chinese Defense Ministry statement did allow for a fleeting reference to how the situation in Ukraine and Afghanistan came up in talks in Ashgabat. It also reaffirmed China’s support for Turkmenistan’s neutrality and opposition to “external interference in its internal affairs,” which is usually code for “meddling Westerners,” but could be anybody the way global affairs are going these days.

The scrupulousness of that neutral status was late last month called into question by Azerbaijan’s president Ilham Aliyev, who accused Turkmenistan, along with Iran and Kazakhstan, of allowing its territory to be used as a stop-off point for weapons directed to Armenia during the war in Nagorno-Karabakh in 2020. Turkish news agency Anadolu cited Aliyev as saying he had dispatched notes to all three countries to ask that they refrain in future from allowing Russian cargo planes carrying weapons to pass through their territory.

Turkmenistan will be hoping this slight moment of testiness is not enough to yet again derail plans to hold a three-way summit with the leaders of Azerbaijan and Turkey. State newspaper Neutral Turkmenistan last month cited Foreign Minister Rashid Meredov as saying that preparations for a summit, to take place in Turkmenbashi, were in motion, although he did not mention any dates.

The moment for finally getting some traction on a trans-Caspian natural gas pipeline with which to get Turkmen gas to the West has, after all, not looked this propitious for decades. As the war in Ukraine forces European countries to think hard about how they expect to end their reliance on Russian gas, the appeal of the trans-Caspian pipeline, which would land in Baku before feeding into Anatolian-bound routes, must be growing strong.

Turkmenistan’s efforts to diversify away to non-energy exports has after all run into trouble again. Rosselkhoznadzor, Russia’s agriculture watchdog, on April 27 announced that it had detected an infestation by potato moths in a recent 18-ton consignment of tomatoes delivered from Turkmenistan. This is an unneeded blow for the fledging Turkmen agro sector, which appeared to have caught a much-needed break in March, when Rosselkhoznadzor said it was dropping all restrictions against the import of vegetables like tomatoes and bell peppers from Turkmenistan, along with places like Armenia, Azerbaijan, Belarus, Kazakhstan, Kyrgyzstan, and Uzbekistan. The inevitable tomato import ban to follow may not extend beyond the company responsible for making this specific delivery, but the incident illustrates how developing a viable food export market is going to be an uphill climb for Turkmenistan.