Despite price increases and concerns about food shortages, the president is demanding more food be shipped abroad. This and more in our weekly Turkmenistan briefing. 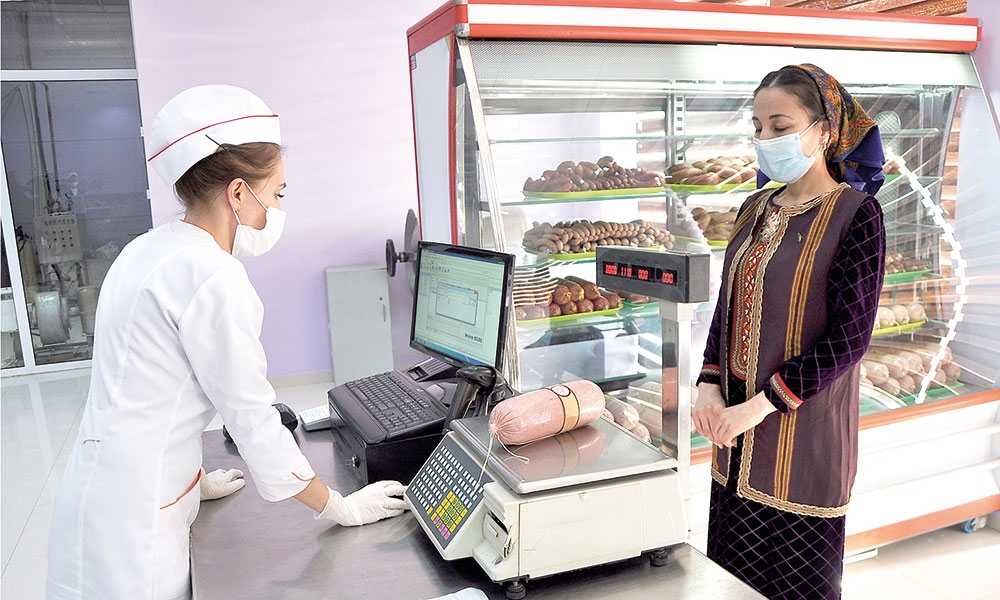 Even the president is starting to worry that there isn’t as much food as state media would have you believe.

A new wave of price increases for basic staples is looming in Turkmenistan. The threat is so imminent that even the president, who only likes to share good news, is openly worrying about it.

With winter now upon the country, Gurbanguly Berdymukhamedov said at a meeting of government officials on November 4, “it has become necessary to strictly ensure the provision of goods and groceries to markets and shops, especially during the holiday season, so as to prevent price increases.”

Berdymukhamedov is forcing the command economy over which he rules, however, to try and perform two apparently contradictory operations at once.

He notes with approval that the export of non-energy resource-related goods over the first 10 months of 2021 increased by 48 percent over the same period last year. Addressing Esenmyrad Orazgeldiyev, the deputy prime minister with the portfolio for agriculture, Berdymukhamedov said a lot more work needed to be done in building on that progress. More Turkmen food must be sent abroad, that is.

The president also wants less food to be brought into the country, lest this trade affect the fortunes of local producers, regardless of what some consumers might want, need or be able to afford. This is why Dovran Khudaiberdyev, the chairman of the parastatal Union of Industrialists and Entrepreneurs, or UIET, seeks, as he did last week, to mollify Berdymukhamedov with his reports of plans to expand cultivation areas for melons, grapes and all kinds of other crops.

Berdymukhamedov developed this theme further at the November 5 Cabinet meeting, where he talked up the need to build yet more greenhouses. The adoption of production-enhancing, land-rationalizing technologies like these is fully in line with long-standing international trends, although the added costs entailed in building and maintaining these facilities means output either needs to be directed at wealthier export markets or heavily subsidized by the state for the purposes of internal consumption.

But the item at the top of the agenda at the moment is to slash expenditure, not increase it. At the Cabinet meeting, the president instructed his son and presumed heir, Serdar, the deputy prime minister, to increase budget revenues and rein in spending. To be precise, Berdymukhamedov told his son to “seek additional sources of financing for the adopted [state budget].” This is a strange formulation in view of how the government routinely boasts of 6.2 percent annual economic growth figures. If the economy is so flourishing, surely it is not a matter of seeking?

The good news all looks like a façade, however.

Consider the sustained tempo of reprimands of top officials. Last week saw another slew of these dressings-down.

Finance and Economy Minister Mukhammetgeldy Serdarov was officially reprimanded on November 5 for “improper performance of his duties and shortcomings in his work.” (Serdarov got a “last warning” and a six-month deadline to sort things out in July. He had been given yet another “last warning” the preceding February, reportedly over concern at mounting state debts.)

Other people decreed last week to be underperforming, in no particular order: Industry and Construction Minister Baimyrat Annamammedov; Nyyazly Nyyazlyev, the chief of state chemicals company Turkmenkhimiya (possibly Turkmenistan’s leading holder of “last warnings,” although it is hard to keep count); Prosecutor General Batyr Atdayev (who is being required to “correct his shortcomings in the shortest possible time”); the chairman of state gas company Turkmengaz, Batyr Amanov (“last warning” and must “correct his shortcomings in the shortest possible time”); and Deputy Prime Minister Shakhym Abdrakhmanov.

One person that Berdymukhamedov is not ever likely to reprimand (publicly) is his own son, Serdar, who this week swanned off to Glasgow to attend the 2021 United Nations Climate Change Conference, COP26, where he practiced his English by droning a litany of nonsensical and vague pledges. RFE/RL’s Bruce Pannier wrote an article dwelling in detail on the hollowness of Turkmenistan’s claimed embrace of environmentalism.

Another area in which Turkmenistan has had trouble reconciling with reality is health. More specifically, on COVID-19, which it continues to deny has entered the country. After months of ducking the issue, an official from the World Health Organization finally admitted this week that Turkmenistan might be struggling to cope with the coronavirus.

“[It] has been spreading worldwide as a pandemic for almost two years now,” said Catherine Smallwood, a WHO senior emergencies officer, told the BBC. “From the scientific point of view, it’s unlikely that the virus is not circulating in Turkmenistan.”

Smallwood’s interview spoke volumes about the addled mindset of the international community in its dealings with Ashgabat. That the WHO was not harder in challenging Turkmen denialism stems, she said, from the conviction that is more important to “build a dialogue” with dictatorships like the one run by Berdymukhamedov than engage in public language that could produce counterproductive results. The fact that Turkmenistan’s population has by all accounts been severely battered by COVID-19 – notwithstanding the WHO’s discretion – is something Smallwood appears prepared to overlook.

Kyrgyzstan is increasingly looking to Turkmenistan as the potential solution to its own problems. The two countries in August reached a deal for the former to import 500 million kilowatt hours of electricity from the latter. The head of the Kyrgyz national energy holding, Talaibek Baigaziyev, revealed on November 3 that three-fifths of that promised volume had already been delivered. The rate Kyrgyzstan is paying is being kept secret.

Bishkek is now also eager to get its hands on some Turkmen natural gas. The head of the Kyrgyz government, Akylbek Japarov, on November 6 met in Bishkek with Deputy Prime Minister Chary Gylydzhov to discuss options. The Kyrgyz government’s website cited Japarov as “noting the importance of ongoing supplies of Turkmen electricity to the Kyrgyz Republic, as well as the prospect of a supply of Turkmen natural gas.”

Any gas would, naturally, have to pass through Uzbekistan, so Japarov and Uzbek Prime Minister Abdulla Aripov duly addressed the matter at talks held during the same Bishkek event, the European Union-Central Asia economic forum.

If Turkmenistan were to start selling gas to Bishkek, it would end the current Russian monopoly over the supply of the fuel to Kyrgyzstan.

And then there is the ever-elusive lure of the European gas market. The idea of building a trans-Caspian gas pipeline pops up occasionally on the news agenda, although bombshell developments – such as, say, somebody punting up cash and presenting an actual construction blueprint with dates attached – are of unicorn-like rarity. Azerbaijan has nevertheless reanimated speculation by announcing, in the person of Energy Minister Parviz Shahbazov, that Azerbaijan would support the pipeline, whose existence is necessary for getting Turkmen gas into European homes. It was unclear from his remarks to Bloomberg news agency, however, if this backing was to be financial or merely political. What is more, the support is contingent on firm deals materializing.

“For that to happen, we have to have new contracts between buyers and sellers,” he told Bloomberg.