Bargaining with China, selling to Tajikistan, and vodka inflation. This and more in our weekly Turkmenistan briefing. 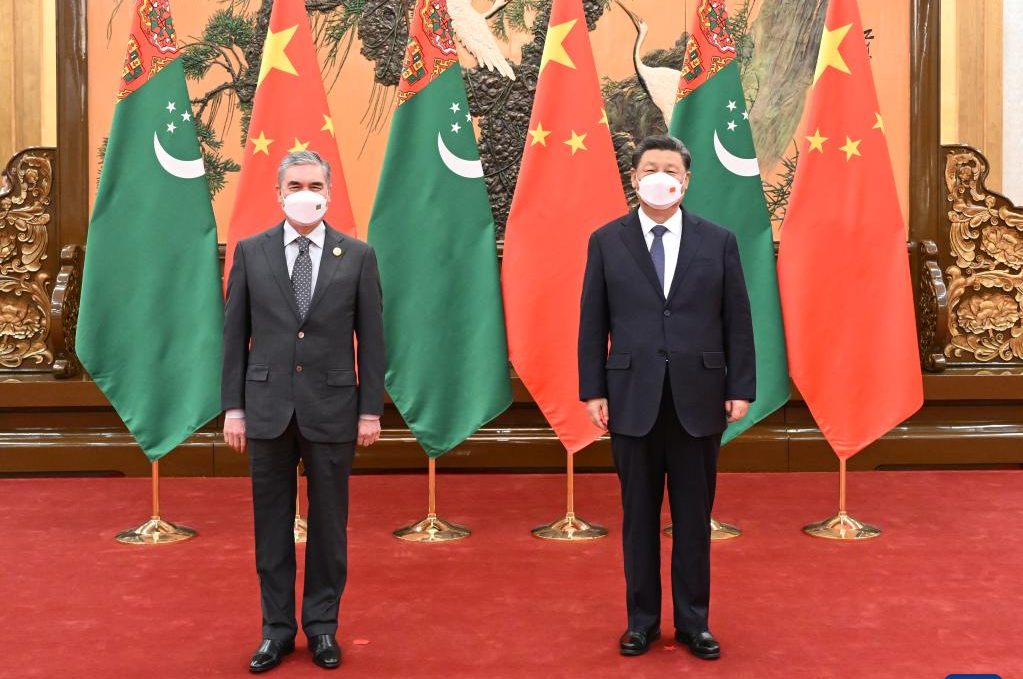 Turkmenistan’s economy is deeply dependent on China, that is in little doubt.

None of this means that Turkmen President Gurbanguly Berdymukhamedov is past haggling for better prices.

The subject of gas fees came up on February 5, when Berdymukhamedov met in Beijing with his Chinese counterpart, Xi Jinping. The Turkmen president was among a select smattering of national leaders to attend the ceremonial opening of the Winter Olympics.

Berdymukhamedov’s initial gambit was to raise the matter of the forthcoming second development phase of Galkynysh, which is believed to be the world's second-largest gas field. There can be little doubt China’s CNPC will be doing much of the legwork there, although the Turkmen leader tried to play it coy on this point.

But first some history.

State gas company Turkmengaz is ostensibly the operator of the Galkynysh project, but the money and technical expertise has always been predominantly Chinese. Turkmenistan received a $3 billion loan from the Chinese Development Bank to develop Galkynysh in 2009, and then, two years later, it got an additional $4.1 billion tranche.

That money has over the years been repaid in the form of gas exports and was, in any case, being funneled straight back to state-owned Chinese companies.

CNPC-affiliated Chuanqing Drilling Engineering Company Limited, or CCDC, has been building wells, pipelines, and processing plants for Galkynysh since the late 2000s. As the CNPC pointedly notes on its website, the field is a complicated proposition because the gas produced there has a high sulfide content and is accordingly complicated to handle.

This symbiotic relationship persists to this day, despite Ashgabat’s faltering attempts to diversify its contractors. In August, a ceremony was held to mark the construction of three new wells at Galkynysh. The contract to do the work was, as ever, given to CCDC. Those three wells, which are being built over a 30-month span, are to supplement the 45 existing wells at the field.

The contract had originally been awarded to Dubai-based Gulf Oil & Gas International FZE, but it was then discontinued for reasons unclear. By all appearances, it came down to money. Turkmen media previously reported that payment for the new wells was to be made to CNPC in the form of gas deliveries, thereby freeing Ashgabat of the need to tap into hard currency reserves.

Returning to the present, Berdymukhamedov told Xi that gas produced in this new phase should be delivered through a projected fourth strand of the Central Asia-China pipeline, also known as Line D. Whenever this phantomatic fourth route, for which 30 billion cubic meters of annual capacity has been proposed, has been spoken of in the past, it has always been on the understanding that it would pass through Kyrgyzstan, Tajikistan, Uzbekistan.

In any case, Berdymukhamedov is eager to get his ducks in a row this time around. “In the course of future cooperation on implementation of a fourth line construction project, it is necessary to start discussing gas prices,” he was cited as saying by Turkmen state media. “Turkmen and Chinese specialists will operate on the basis of global precedent in the field of pricing for commercial pipeline gas.”

Only once an agreement on that point has been reached will Turkmenistan “consider the participation of a Chinese company in the development of the second phase of the Galkynysh field,” Berdymukhamedov then said. And again, Chinese investments will be reimbursed in the form of gas.

Trying to land on firm cost estimates for all this may be a fool’s errand, but there are figures floating about out there. Turkmen media have mentioned estimates for the building of the 1,000-kilometer Line D, which would have to traverse complicated Tajik terrain, of $6.7 billion. And it has been assumed that $10 billion could be spent on the next phase of Galkynysh, although this is pure guesswork.

With those kinds of eye-watering figures – and they are very likely outdated and conservative estimates by this point – it is not hard to see why Berdymukhamedov hopes to drive a hard bargain with Beijing and thereby secure returns for the Turkmen state coffers within a reasonable timeframe. This also adds an additional perspective to the urgency with which Ashgabat has latterly pursued the trans-Afghan TAPI pipeline project. The more prospective buyers Turkmenistan has, the harder it can bargain.

Turning to more immediate questions, China has pledged the delivery of an additional consignment of 5 million unspecified COVID-19 vaccines to Turkmenistan.

Turkmenistan has been lying through its teeth on its COVID-19 crisis, but this is what it claims so far: The country has recorded zero infections and has, according to Health Minister Nurmuhammet Amannepesov, administered vaccinations to 80 percent of the population. An additional 5 million vaccine doses then, if any of this is to be believed (which it should not be), the evident intent is to weave some fable about the government successfully fulfilling a booster jab campaign.

Still, Berdymukhamedov is trying to set the example. Upon his return home from Beijing, he consented to undergo a three-day period of self-isolation.

Tajikistan has materialized as one new customer for Turkmen energy exports, specifically in the form of liquefied petroleum gas. Tajik Energy Minister Daler Juma said on February 1 that Tajikistan in 2021 bought a relatively trifling 5,000 tons of LPG from Turkmenistan, but that it will under a recently signed agreement be eligible to acquire “unlimited” amounts of the fuel in future. For comparison’s sake, Tajikistan imported 360,000 tons of LPG from Kazakhstan last year, and another 50,000 tons from Russia. Sputnik news agency reports, without citing the source of its information, that around 50-60 percent of motorists in Tajikistan use LPG.

Spirit-drinkers in Turkmenistan will have woken up with a pre-emptive hangover on February 1 with the news that vodka prices have gone up by 5 percent. RIA-Novosti news agency, which apparently keeps a close eye on such matters, reported that half-liter bottles of the popular Arassa brand sells in state stores for 39.6 manat ($2 at black market exchange rates, $11.30 at the official rate). That is 1.9 manat more than it was before, RIA notes.

Still, this costlier boozing should not trouble state employees, as the Russian news agency appeared to argue further down in its report (not available online). As is customary, it noted, salaries for civil servants, pensions and other forms of welfare went up by 10 percent on January 1, thereby maintaining vodka price rises well within the corridor of salary inflation.