With Turkmenistan’s maiden Caspian Economic Forum now over, the spin has begun. 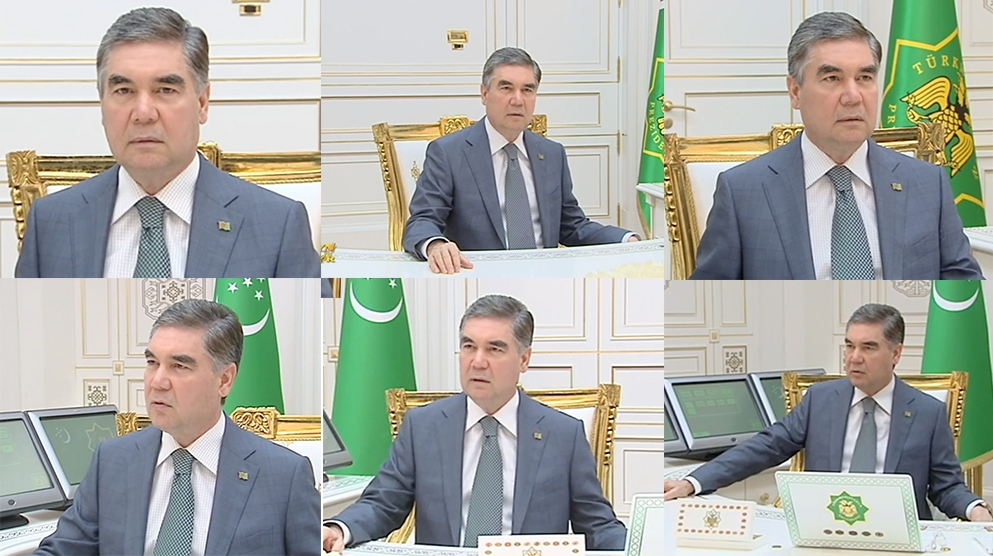 Careful scrutiny of the president’s image is going to become a firm staple of Turkmen-watching for the foreseeable future. (Eurasianet montage)

State newspaper Neutral Turkmenistan this week divulged some interesting and closely guarded information about the level of foreign investment into the nation’s energy sector.

According to an article published on August 14, Malaysia’s state-owned Petronas has invested at least $11 billion. China's CNPC has invested more than $8 billion in the past 12 years, the newspaper claimed.

The article was part of a flurry of spinning to cast last week's Caspian Economic Forum as a success.

Government news agency TDH declared that the state import-export exchange had done a record volume of business during the forum – 256 transactions amounting to $380 million in sales. Most of the trade was reportedly in petrochemical products, with $335.5 million being bought by companies registered in countries like Russia, the United Arab Emirates, China, Switzerland, the United Kingdom, Luxembourg, Singapore, Malta and Afghanistan. Businesses from Turkey and Switzerland spent almost $37 million on raw cotton, which is something that rights group might investigate.

All but honored guests were allowed anywhere near the forum in the resort town of Awaza, but RFE/RL’s Turkmen service, Radio Azatlyk, managed to obtain some unflattering insights into the organization. One attendee contacted by the broadcaster claimed to have found a hole in the wall of his hotel room, while another guest found a bat in his. Every foreign delegation was given a guide, although their terse manner made it seem they were minders rather than helpful assistants.

In spite of its recent monstering at the hands of popular U.S.-based comedian John Oliver, Guinness World Records, which is one of the Turkmen government’s most reliable flatterers-for-pay, was on hand in Awaza to memorialize another dubious achievement. This time, a crowd of 3,000 people sat through a 35-minute lecture on the environment – a never-before achieved feat, apparently. (Azatlyk cruelly showed how not all listeners were able to remain fully awake the whole time as President Gurbanguly Berdymukhamedov carried on in his monotone drone).

Even by the incomparably low standards of Guinness, this is remarkably cynical and pointless. Turkmen citizens and officials are routinely corralled, on pain of job loss or worse, into participating in propagandistic events, so this is an instance of the company quite directly abetting – not to say encouraging – repression.

Even religious holidays must submit to the dictates of the regime. So as not to clash with the proceedings on the Caspian, the president signed a decree nudging forward celebration of Kurban Bayramy, as the Islamic holiday of Eid al-Adha is known locally, by a few days.

Just as well that people do not really have much money to celebrate anyway. The Vienna-based Chronicles of Turkmenistan and Netherlands-based Turkmen.news alike reported that festivities in Ashgabat and Dashoguz were muted in light of the ongoing economic slump.

No such modesty for Russian pop stars Nyusha, Sergei Lazaryev and Zara, who performed at the closing ceremony of the Caspian forum. They scoffed about how many treats they were given to take home, including upward of a dozen melons. Lazaryev, who has millions of followers across the Russian-speaking world, cheekily lamented the lack of social media access in the country. This is quite likely a result of even tighter restrictions on internet access imposed in the wake of rumors about Berdymukhamedov’s death.

When anybody other that Turkmen state media is able to weave the message, it almost invariably ends up looking embarrassing for Ashgabat and Berdymukhamedov personally. When the Turkmen leader met with Rustam Minnikhanov, the president of Tatarstan, which is a federal subject of Russia, on the sidelines of the Caspian forum, the exchange was captured on video by Kazan-based newspaper Biznes Online. The footage, uploaded to the internet on August 13, showed Berdymukhamedov looking ashen-faced compared to his fulsomely tanned interlocutor and slurring inconsequentially at length about luxury cars.

Opposition-linked outlet Gundogar claimed there was some trickery afoot following the visit to Ashgabat from Uzbek Foreign Minister Abdulaziz Kamilov. State television aired a seven-minute report appearing to show the visitor holding talks with the president, but Gundogar insists, following a careful study of the footage, that this encounter was faked.

In fact, the Uzbek Foreign Ministry’s own rundown of the visit alludes to a meeting between Kamilov and his Turkmen counterpart Rashid Meredov, but made no mention of Berdymukhamedov. Turkmenistan’s Foreign Ministry also only released a joint photo of Kamilov and Meredov.

This careful scrutiny of publicly available images is going to become a firm staple of Turkmen-watching for the foreseeable future. Take the evening bulletin from August 19, which carried an extensive report about Berdymukhamedov being debriefed on the state of agriculture. The president appears in multiple clips, amounting to 2:30 minutes in total. In most of these fast-cut snippets, however, he sits ramrod still without speaking. Some of the pictures actually seem to be photos – odd given how much video footage state TV must have at its disposal.

In other travel plans, Berdymukhamedov is headed to Singapore at the end of the month for what will be a very closely watched voyage. No agenda has yet been announced.

With the start of the academic year approaching, there is a combination of slightly encouraging and dispiriting news incoming. On August 15, the Chronicles of Turkmenistan reported that Ashgabat residents were being offered to buy school uniforms on credit. Such loans were not available last year. Meanwhile, in a sign of the times, Chronicles sources claimed that universities will soon begin charging tuition. On August 17, Radio Azatlyk noted that students in Mary province are being forced to donate money to buy school supplies, as well as a flag and even more portraits of the president.