The Ovan-Depe plant will produce vast amounts of clean gasoline, but can Turkmens afford it? 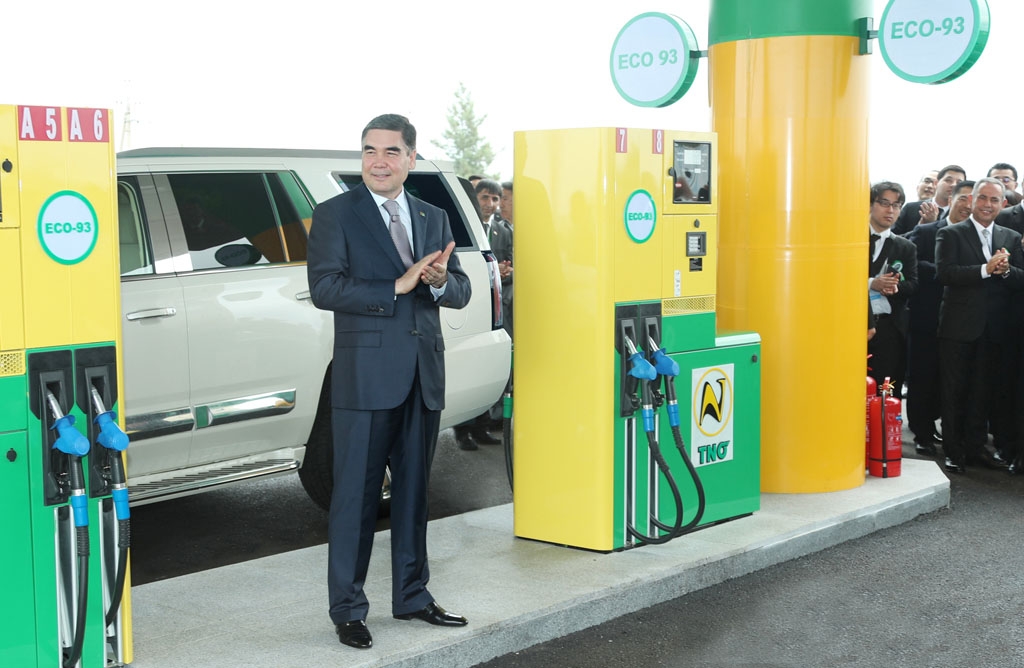 A train carrying a batch of synthetic gasoline produced in Turkmenistan pulled into a station just across the border in Afghanistan earlier this week. The size of the delivery was not stated in Turkmen state media accounts, but the significance of this event may be very considerable.

The fuel is the first commercial export product generated by the $1.7 billion gas-to-liquids plant that was opened on June 28 in Ovadan-Depe, just outside the capital, Ashgabat, with great ceremony. The projected output figures are impressive. TDH state news agency has estimated the plant will every year – once it reaches peak capacity – take 1.8 billion cubic meters of natural gas and convert it into 600,000 tons of the type of gasoline one might find down at the local filling station. For sake of comparison, that is roughly the same amount of gasoline that Kazakhstan has said it hopes to export this year.

Local Turkmen media are touting the Eco-93 fuel being made at Ovadan-Depe as an environmentally friendly breakthrough. Warming to this theme, President Gurbanguly Berdymukhamedov, who at one stage engaged in filling a car fuel tank for the cameras, hailed the project as an important step toward turning Turkmenistan into one of the world’s foremost green economies.

Who will buy this clean fuel though? Even the ferociously on-message Gundogar-News (not to be confused with opposition linked Gundogar.org) had to concede that Eco-93 will be more costly at the pump than A-95, which is the highest grade gasoline currently available on the market. Given how meager incomes are in Turkmenistan, this is a luxury in which many will not be able or willing to indulge.

Afghanistan is one option, although spending power is hardly any better there. Orders have reportedly already come in from Bulgaria, Greece and Romania. But that could be a sting in the tail there too. State media has noted that the Eco-93 gasoline is in line with the Euro-5 emissions standard as set out by in European Union directives. The only problem is that car manufacturers wishing to sell the vehicles in the EU have since 2015 been required to meet slightly more stringent Euro-6 emission standards. Unless the Turkmen government works to push Ovan-Depe’s product over that bar, it could eventually find the door to the lucrative European market slammed in its face.

As with many other major projects of this nature, the work was done with considerable outside help. In this instance, it was a joint effort between Japan’s Kawasaki Heavy Industries and Ankara-based Renaissance Construction. That tie-up has excited a minor bout of Nipponophilia culminating in the creation of a direct Ashgabat to Tokyo flight to be serviced by Turkmenistan Airlines. Berdymukhamedov in May signed a decree ostensibly making it simpler and cheaper for Japanese citizens to visit Turkmenistan for short-term stays, but given how fast the rest of the region is opening up to tourists, this lure may not be sufficient to justify a long and costly route.

This week saw the publication of the country’s second-ever annual digest on human rights. The historic import of the edition compiled last year by the Human Rights Ombudsperson was considerably undermined by the discovery that large portions had been lifted directly from a document outlining the role of the Ombudsperson for Human Rights in Kazakhstan. It is not yet known if any such craftiness occurred this year, but the fact remains that the document is of highly specious value. Most of it is an unabashed whitewash that reports in an approving manner throughout on the purported efforts of President Berdymukhamedov to improve life in all areas. Such shortcomings as are found are laid at the feet of lower-level functionaries deemed “ignorant of the provisions of the law.” In its summary of the digest, Amsterdam-based Turkmen.news dwelled on how the Ombudsperson’s office in 2018 registered 985 complaints from citizens. Those petitions mainly regarded housing issues and court rulings. Another tantalizing detail was about the 78 written and 72 oral petitions regarding civil and political rights. No details from those appeals were divulged, however. Only three petitions were successfully processed.

As Turkmen.news noted, the nightmarish conditions of Turkmen prisons were wholly glossed over, so the website has pledged to continue its detailed account of what happens in those places.

The biggest splash from Turkmen.news this week, however, was its extensive and detailed account on the shenanigans behind the construction a $2.3 billion highway stretching 640 kilometers from Ashgabat to Turkmenabat. The purpose-created entity charged with carrying out this pharaonic task, Turkmen Awtoban, is in turn constituted of four companies – Altyn Nesil, Hyzmat Merkezi, Oguz Yol and Nusay Yollary. When Berdymukhamedov’s son, Serdar Berdymukhamedov, who was last month appointed Ahal provincial governor, oversaw the ground-breaking ceremony for this highway in January, he cast it as a boon for the development of private enterprise.

“Turkmenistan has great confidence in and is giving support to the private sector, which is developing rapidly,” he said.

None of the four companies involved seem to have any significant relevant experience, so the question arises to how they were selected.

As Turkmen.news has found, Nusay Yollary appears to be owned by a man called Annanazar Rejepov, who happens to be the husband of one of President Berdymukhamedov’s sisters. The website’s Russian-language report contains a wealth of fascinating insight on the various financial interests of the extended Berdymukhamedov family.

As the report concludes, in a disapproving editorial flourish, international financial institutions should be mindful when sinking cash into Turkmenistan projects that they are not inadvertently enriching the ruling family.

A group of international rights groups adopted a similar argument in a June 14 letter pleading with the European Bank for Reconstruction and Development to refrain from expanding “its programs in Turkmenistan to public sector lending until the government has demonstrated that its stated commitment to human rights and democracy has translated into concrete and measurable progress, resulting in real life improvements for the citizens of Turkmenistan.”

Ashgabat may, of course, be hoping that it has no cause to panhandle for such largesse. Gazprom chief executive Alexei Miller dangled what sounded like some promising news on June 28, when he remarked that his company plans to buy up to 20 billion cubic meters of natural gas annually from Central Asia in 2019, 2020 and maybe even 2021. There are obviously other sellers in the region, but sales are sales, so anything Turkmenistan can persuade Moscow to take off its hands could stand to ease the cashflow troubles.