The president’s authority now looks desperately weakened, which means that if anything should happen to his 65-year-old father, a crisis of legitimacy could ensue. Our weekly briefing. 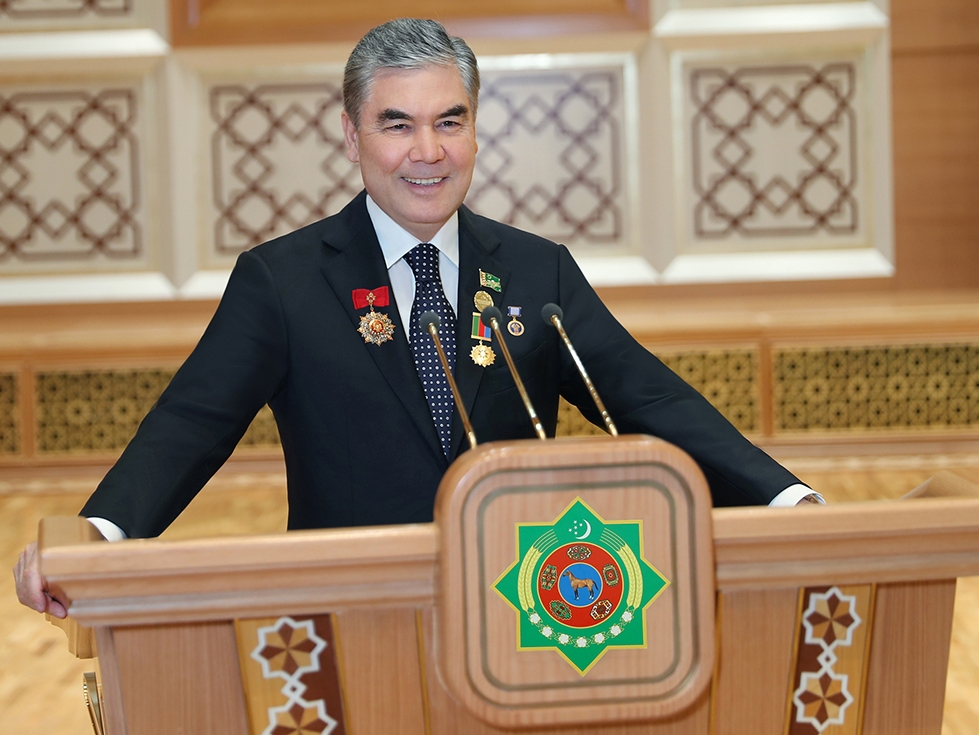 And just like that, Gurbanguly Berdymukhamedov, the man who stepped down as president of Turkmenistan last year, is back in charge.

It all unfolded on January 21, when the upper and lower chambers of parliament convened for a joint session to agree on yet another overhaul of the constitution.

In summary, the upshot of these choreographed discussions was to scrap the senatorial upper house, known as the Halk Maslahaty, or People’s Council, which only came into being in January 2021. In its place will appear an eponymous but quite different Halk Maslahaty, and the legislature will revert to a single-chamber institution.

Back in the days of the late President Saparmurat Niyazov, who died in 2006, the Halk Maslahaty was a Turkmen-style hybrid of the Ancien Régime Estates General and the Pashtun loya jirga. Policies earlier thrashed out by the dictator’s inner circle would be given the imprimatur of public support by a claque of community elders and government lackeys at a mass assembly of the Halk Maslahaty.

The national leader will have the authority to “appeal to the people” – in effect, take decisions – on important matters of domestic and foreign policy, security, and social and economic affairs. He will also be empowered to address parliament on matters of state and legislation. What is more, he and his family will enjoy immunity.

Should the national leader be unable to perform his duties, the role passes to the president. That is to say, Serdar Berdymukhamedov. This is a crude switcheroo since it had until now been the case that if the president was unable for any reason to perform his duties, the chair of the now-scrapped upper house, who happened to be Gurbanguly Berdymukhamedov, would take over.

In the black box that is Turkmenistan, there are few clues as to why this is being done. Turkmen political analyst Kumush Bairiyeva not unreasonably argued in remarks to RFE/RL’s Turkmen service, Radio Azatlyk, that these developments reflected “Gurbanguly Berdymukhamedov’s hypertrophied vanity” and his dissatisfaction with the role of a mere chairman of the upper house of parliament.

Another credible explanation is that the Turkmen regime looked north to Kazakhstan and watched with dismay how badly the transition of power effected in 2019 turned out there. Ever since the political turbulence of January 2022, the standing of Kazakhstan’s former president, Nursultan Nazarbayev, who had couched himself with generous behind-the-scenes lifetime powers before agreeing to step aside, has been on a rapid and inexorable slide.

In a vivid physical testimony to that decline, it emerged that Nazarbayev last week had to undergo an hours-long heart operation. On January 22, Berdymukhamedov the elder sent a note of almost certainly very sincerely felt sympathy to Nazarbayev. There but by the grace of God, he will have thought.

This precedent-setting, musical-chair detransition of power stands, of course, to revive the problem that existed prior to last February. President Serdar Berdymukhamedov’s authority now looks desperately weakened, which means that if anything should happen to his 65-year-old father, a crisis of legitimacy could ensue.

The other perennial imponderable over Turkmenistan concerns its relations with the outside world. The twin policies of neutrality and isolationism have historically enabled Ashgabat to portray itself as not being beholden to any camp. Russia’s highly enthusiastic and successful overtures are testing the credibility of that stance.

The two-day visit to Ashgabat by Russian Prime Minister Mikhail Mishustin that started of January 19 was accompanied by a flurry of agreement-signings and expressions of optimism about more elaborate forms of cooperation in future.

Mishustin’s delegation signed eight intergovernmental agreements with their Turkmen counterparts, including on cooperation in migration control, customs, and phytosanitary standards.

There is a vision behind this fiddly bureaucratic business.

Turkmenistan is spying an opportunity to become Russia’s corridor to South Asia, now that the Europeans are turning their back on Moscow. As Turkmen Foreign Minister Rashid Meredov noted at a Russian-Turkmen Business Forum held in Ashgabat to coincide with Mishustin’s stay, the amount of Russian cargo transiting through Turkmenistan has quadrupled over the past year. Having the people whose job it is to enable goods to get from Point A to Point B on the same page is a basic precondition for this trend to continue.

The obvious corollary benefit for Turkmenistan here is that it will stand to do more business with Russia.

Representatives from 220 Russian companies and 110 Turkmen companies, from the sectors of industry, agribusiness, transport, logistics, IT and education, attended the Russian-Turkmen Business Forum. The forum reportedly generated 150 billion rubles ($2 billion) worth of deals. Dmitry Volvach, the deputy head of Russia Economic Development Ministry, said Russian companies are already implementing around 20 investment projects in Turkmenistan worth a total of around $3.5 billion.

Just to tease out a couple of specific examples of tie-ups, a memorandum of intent was signed for Turkmenistan to establish a logistics facility at a special economic port zone in Russia’s Astrakhan region and state-owned Russian Railways announced that it is poised to reconstruct a carriage repair yard first built in Turkmenistan in 1881. Given how desperately Moscow is chasing the North-South transportation corridor agenda, it is little surprise the more concrete-sounding commercial deals invariably have to do with railroads, ship-building, trucks, and the like.

Another piece of high-altitude strategizing being developed by Moscow centers on energy.

Zamir Kabulov, Russia’s veteran special presidential envoy on Afghanistan, gave perhaps the strongest indication to date that Moscow could be induced to get involved in implementation of the trans-Afghan TAPI natural gas pipeline.

“Russia will participate on condition that the partners in this project make such a proposal,” Kabulov told state-owned Rossiya 24 news channel. “[President Putin] many years ago outlined our position and readiness to contribute to such a process. All the more since this constitutes an integral part of the Russian strategy of pivoting toward Asia.”

TAPI would be filled entirely with Turkmen gas, so Russia’s gains from investing materially toward implementation would not necessarily be financial.

Then again, Russia evidently has designs on getting its own fuel onto the South Asian market. On January 20, Energy Minister Nikolai Shulginov told reporters that Russia is exploring possibilities for gas giants Gazprom and Novatek to start selling liquified natural gas, or LNG, to Pakistan by the end of 2023.

Russia is also reportedly interested in participating in the construction of Pakistan Stream, a projected 1,100-kilometer pipeline that would carry up to 12.3 billion cubic meters of gas annually from LNG facilities in Karachi and Gwadar to power plants and industrial gas consumers in Pakistan’s Punjab province.

While this latter mooted project is not directly related to TAPI, there are strong grounds to see some form of potential synergy between the two undertakings, not least since they would both have end points located in the Punjab area on the Indian-Pakistan border.

In the meantime, Turkmenistan has got some closer and more short-term gas business to be dealing with. Earlier this month, media in Uzbekistan reported that fuel deliveries from Turkmenistan had suddenly come to a halt amid technical faults apparently provoked by this particularly cold winter. This was disappointing since Uzbekistan agreed as recently as December to buy 1.5 billion cubic meters of natural gas from Turkmenistan over the winter.

President Berdymukhamedov on January 19 traveled to the Mary province, where the Galkynysh gas megafield is located, in what looked like an exercise in chivvying technicians into sorting out the problem. And then, after a hiatus lasting almost 10 days, Uzbekistan on January 21 once again started receiving Turkmen gas, although at lower volumes than before. Uztransgaz said it is taking receipt of around 4.6 million cubic meters of gas daily and that this amount should rise to 16 million cubic meters “in the coming days.” The deal reached in December was for 20 million cubic meters daily.