The bad news is that a pipeline project is languishing, industrial output is poor and there are too few eggs. But freelance writers are flourishing. 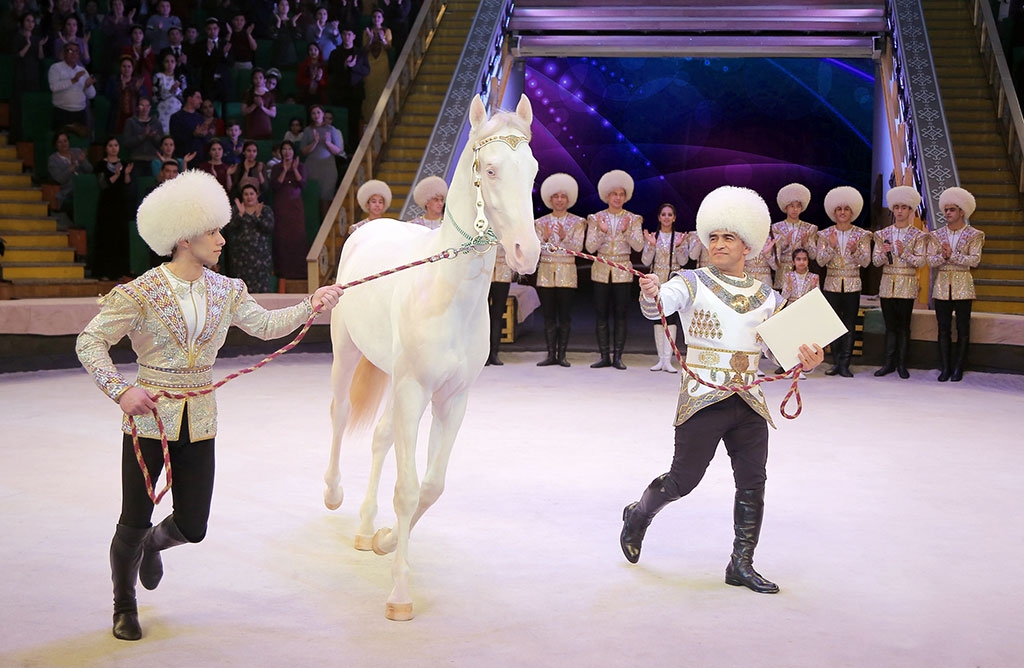 President Berdymukhamedov, a patron of the State Circus, gifted an Akhal-Teke horse to the Galkynysh Group. (Turkmenistan State News Agency)

Turkmenistan’s foreign minister is in Pakistan this week to try to inject fresh impetus into the TAPI pipeline undertaking.

A state bulletin describes Rashid Meredov’s March 11-13 mission as focusing on “the intensification of work on the implementation of the Turkmenistan-Afghanistan-Pakistan-India gas pipeline.”

This was not how things were supposed to be. The plan was once for work on the Pakistan section of the pipeline to begin in May 2018. This never happened, which is a serious problem seeing as the Pakistani 826-kilometer section of the 1,814-kilometer route is the largest link of the chain.

Worse than that, not only has Pakistan not moved a single grain of sand – even the legal details have yet to be fully resolved. This should be changing imminently, according to Pakistan's daily newspaper The Nation, which reported on March 8 that a host-country agreement is to be signed between Islamabad and the Ashgabat-led TAPI pipeline consortium this week.

That should give a little additional purpose to the TAPI steering committee meeting being convened in the Turkmen capital on March 27.

Turkmenistan desperately needs to get an economic fillip from somewhere so that it does not have to keep fudging its figures so badly at home. The Cabinet meeting on March 7 was a tour de force of implausibility.

President Gurbanguly Berdymukhamedov heard at the meeting, devoted in part to a review of economic performance in the first two months of the year, how the national air carrier had achieved 116.3 percent of its planned targets. Unless Turkmenistan Airlines’ target for that period was to be banned from flying to Europe and to repeatedly leave customers stranded in India, this just looks like a bald-faced fabrication.

No less fanciful was the claim that state chemicals company Turkmenkhimiya exceeded its targets by 6 percent. It was only in November that Berdymukhamedov was complaining about the shortcomings of Turkmenkhimiya’s management.

Then again, Ashgabat has laid Turkmenkhimiya’s woes at the feet of a Belarusian company called Belgorkhimprom, which Turkmenistan says failed to properly complete the ambitious Garlyk potash plant launched in March 2017. The plant is supposed to be churning out 1.4 million metric tons of fertilizer annually, but people familiar with the situation have told Eurasianet that in the months of November and December only 2,000 tons were produced at Garlyk.

Belgorkhimprom has taken the lead in advancing its side of the narrative in this standoff. People close to the dispute have cast the Turkmen government in a highly negative light, talking about how it has taken millions of dollars of Belgorkhimprom equipment hostage. Turkmenistan is also said to still owe $150 million for work done.

A loyal Ashgabat-based outlet called Gundogar-News – not to be confused with the similarly named, but opposition-affiliated Gundogar – struck back this week with a lengthy article detailing all the jobs that Belgorkhimprom allegedly failed to complete at Garlyk.

Gundogar-News even went so far as to warn that Belgorkhimprom’s shoddy construction posed the risk of a "man-made disaster that could cause casualties among the population and serious environmental damage."

This battle of words by proxy is unfolding as Minsk and Ashgabat are battling it out through international arbitration.

Remarkably though, efforts to further Turkmen-Belarusian economic relations are continuing unabated in other areas. The Belarusian Embassy in Ashgabat announced that a delegation from truck-maker Minsk Automobile Plant, or MAZ, came a-visiting. MAZ is hoping to flog cargo vehicles and spare parts. Belarusian machinery is appreciated in Central Asia because it is hardy, relatively affordable and the spare parts are easier to source.

The visiting Belarusians also met with Alexander Dadayev, chairman of Turkmenistan’s ubiquitous Union of Industrialists and Entrepreneurs, the parastatal conglomerate that is the spear’s tip of Berdymukhamedov’s grandiose vision to marketize the economy.

It is difficult to imagine the country’s current leadership will ever possess the capability, or even real willingness, to usher in anything resembling a market economy, however.

This week, RFE/RL’s Turkmen service, Azatlyk, noted how the government claimed to have exported 79.4 million chicken eggs in 2018, for which it earned a quite modest $3.8 million in foreign currency. In the meantime, there have been massive egg shortages for consumers inside Turkmenistan.

Citizens are also regularly press-ganged into performing uncompensated labor through reliance on Soviet-style work holidays known as subbotniks. Sometimes this enforced extracurricular labor takes on grotesque forms. Azatlyk explained in a March 7 report how teachers at the Turkmen State School of Culture and Arts in Ashgabat have complained about how they are being forced to meet an annual quota of articles and poems about the president.

“These poems and articles are then published in Education and Culture Ministry newspapers and magazines,” one teachers told Azatlyk.

Because some teachers feel insufficiently skilled to compose such works, they are reportedly often forced to pay somebody else to do it for them. Turkmenistan, it seems, is one country where working as a freelance writer is actually a viable sideline.

Turkmen.news – a rebrand of a Netherlands-based website formerly known as Alternative News of Turkmenistan – reported that more currency controls are in place. Ashgabat residents are now able to send only $200 per month out of the country through Western Union, down from the previous $480. The permitted amounts are reportedly even lower in other areas of Turkmenistan.

If the government was so desperate to attract foreign currency, one easy way to draw at least some small amounts would be make it easier for tourists to visit. As it is, visa regulations are unfit for this purpose as they force travelers to book costly tours. This notwithstanding, speaking at a national Security Council meeting on March 6, the head of the State Migration Service, Mergen Gurdov, claimed that the rate of visits from foreign citizens had "increased significantly” so far this year. That was not enough to avoid Gurdov getting a reprimand from Berdymukhamedov, who complained that migration procedures need to be raised to international standards.

In what feels like an inadvertent metaphor, government-loyal outlet TurkmenPortal reported on March 11 that a local company is bracing to start producing artificial marble. Anybody who has been to Ashgabat in the last decade or so will know that Turkmenistan is deeply fond of marble. So much so, the city has been recognized by Guinness World Records for having the highest density of buildings covered in white marble. As of March 2013, there were 543 such edifices clad with a total more than 4.5 million square meters of the stuff.