Turkmenistan: Lots of sinking, not much swimming

It is unclear why the government wants young people to come back. Jobs are scant and foreign companies are as unwilling as ever to invest. 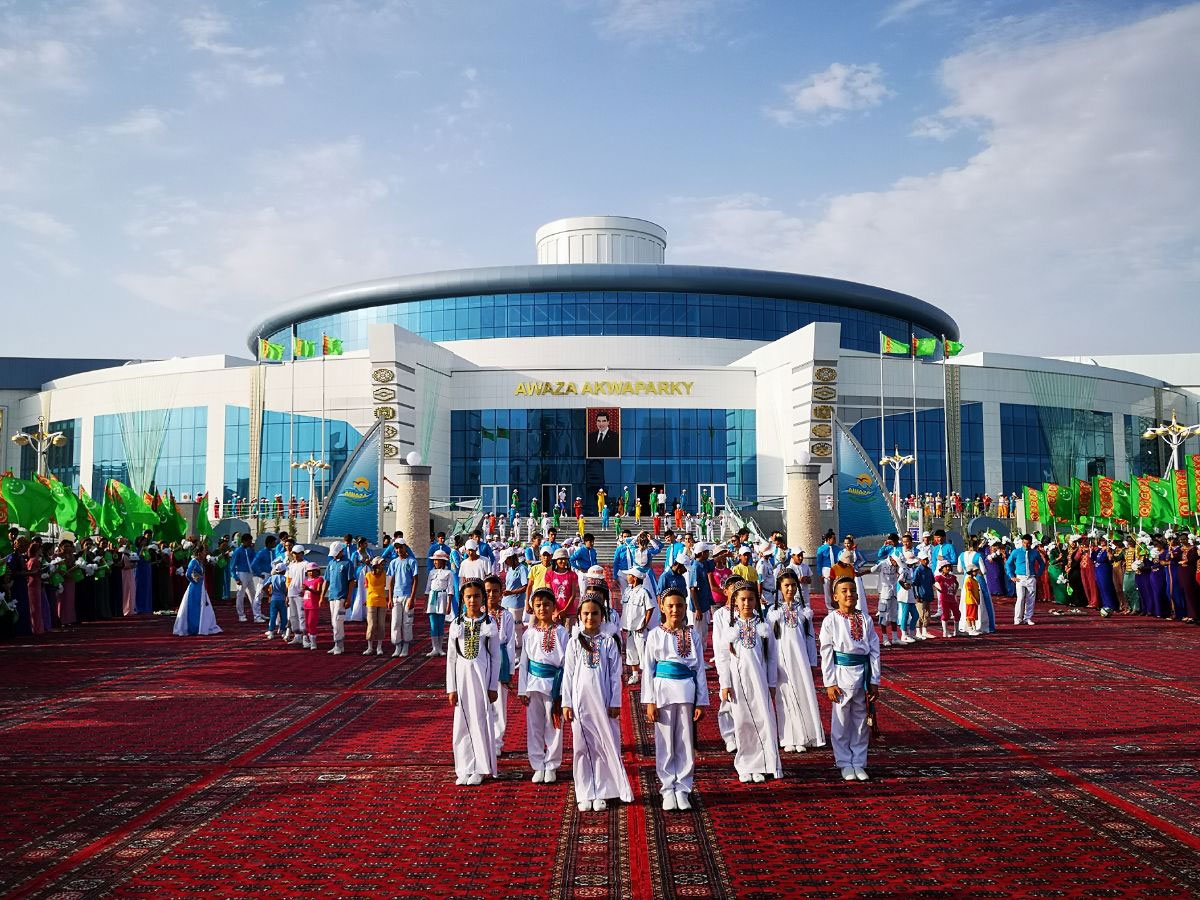 In keeping with the summer holiday season, news out of Turkmenistan has persisted with its leisure-dominated theme.

This week saw the inauguration of an all-singing, all-dancing sanatorium and waterpark at the Awaza resort town on the Caspian Sea. The sprawling complex includes a shopping center, dozens of shops and cafes and an amphitheater that can seat 1,640. Describing the scene at the opening, the state-run TDH news agency spoke of the “air ringing with the sound of … the joyful emotions and delight of children.”

One sound that was not heard, however, was the drone of President Gurbanguly Berdymukhamedov, who unaccountably skipped the opening, leaving the job overseeing things to Deputy Prime Minister Purli Agamyradov. Is it possible the sound of global derisive laughter triggered by his recent holiday antics, which included a rap duet with his grandson, somehow reached his ears?

The price tag for this latest indulgence is unknown, but the suspicion is that the final result was a diluted version of earlier intentions. A funky and almost certainly extremely expensive vision for the park created by Julien De Smedt Architects appears to have been ditched in favor of something looking more like a suburban office park.

Quite who this park is meant to draw is another mystery. As the exile-run Chronicles of Turkmenistan reported, one-day passes for adults cost 120 manats, which is equivalent to $34 at the official exchange rate or almost $7 at the black-market rate. In times of economic depression, both sums feel like an unaffordable luxury for most Turkmen citizens.

Turkmenistan seems to be aiming at the Chinese market for tourists. Azerbaijan’s Trend News Agency cited Turkmen state media as saying that a visa center has opened in Beijing. This initiative, reportedly a joint effort between the Turkmen Embassy and a Chinese consulting firm, appears intended to ease the process of receiving travel permits for hopeful tourists, but one has to wonder why any Chinese visitor would favor Awaza over cheaper and simpler destinations elsewhere.

If tourists find it hard to get into Turkmenistan, matters are considerably worse for Turkmen citizens, who are often thwarted in their attempts to leave or even move around inside the country.

On July 19, RFE/RL’s Turkmen service, Radio Azatlyk, cited two sources as claiming that close relatives of the president forced some 160 passengers off a plane schedule to fly from the northeastern town of Turkmenabat to Ashgabat. The incident reportedly took place a month ago, when the relatives in question were returning from a holiday and decided to commandeer the flight.

On July 18, the exile-run Alternative News of Turkmenistan, or ANT, reported that hopeful passengers have been mobbing the swanky new seaport at Turkmenbashi in the hope of getting on a ferry to Baku, in Azerbaijan. Travelers are forced to wait for days as the ferries depart irregularly. By way of explanation, ANT said many Turkmens are desperate to get to Azerbaijan to find work as hairdressers or waiters, and in some instances, the sex industry. Exploitation of their despair is rife as scalpers reportedly buy up tickets and sell them at three times their official price.

Life is not easy for those already abroad either. The trouble Turkmen students overseas have experienced receiving money from home has been well documented by Radio Azatlyk. On July 20, the outlet reported that debit cards issued by Turkmenistan's state bank to students studying in Russia's Astrakhan region immediately ceased working after graduation. This looks like a hardball tactic to force the students home. That much was made clear in a July 23 Radio Azatlyk report about how authorities are even pressuring community elders into persuading Turkmens abroad to return. Failure is reportedly leaving the elders, whose role is semi-formal, open to threats of being stripped of their positions.

It is unclear what the government wants these young people to come back for. Jobs are scant and foreign companies are as unwilling as ever to invest. Russian energy-focused news outlet Neftkapital reported on July 19 that oil firm Zarubezhneft is pulling out. While Zarubezhneft has not done any serious work in Turkmenistan since at least 2011, it was one of only three Russian oil companies to attempt a major push into the country.

For all the misery being piled on the population, the government is eager to be seen as caring. This week, TDH announced that Berdymukhamedov has set new goals for his government’s “socially oriented policy” and stated that the public welfare and national health are top priorities. While a smattering of small projects was unveiled, TDH’s report also unintentionally underscored the often farcical nature of these efforts by noting that “all health institutions offer tisanes made from plants described in the writings of [President Berdymukhamedov].”

Berdymukhamedov is, formally speaking, the holder of a medical degree – as the July 17 edition of state newspaper Neutral Turkmenistan reminded readers while declaring Turkmenistan a world leader in something called immunoprophylaxis – although he is a dentist by training.

For those wondering who may risk being impacted by the U.S. ban on Turkmen cotton imports announced in May, the same edition of the paper helpfully revealed that many well-known retailers and clothes-makers like IKEA, Puma, Walmart, Lidl, Bershka, Pull&Bear, River Island and Costco turn out products containing Turkmen cotton.

On the foreign policy front, state media has continued to faithfully report the progress of the president’s son and assumed heir, Deputy Foreign Minister Serdar Berdymukhamedov. On July 18-19, according to the Turkmen Foreign Ministry news agency, Serdar travelled to New York, where he met with UN Secretary General Antonio Guterres, as well as Achim Steiner, administrator of the UN Development Program, or UNDP.

Serdar Berdymukhamedov’s primary motive for being in New York, however, appears to have been to lend some heft to a presentation at UNDP headquarters on the Turkmenistan-Afghanistan-Pakistan-India gas pipeline – TAPI, a project big on ambition but short on international funding.

While at the UNDP, Berdymukhamedov junior offered Steiner an invitation to attend talks being held under the auspices of the International Fund for Saving the Aral Sea. This long-standing issue has assumed a fresh urgency with another reported dust storm striking Dashoguz province on July 18. As with the late May storm that affected wide areas of Turkmenistan, the dust is suspected to have come from the dried-up Aral Sea bed in neighboring Uzbekistan. Dust from that area is highly contaminated with salt and pesticides and is harmful to the health of anybody caught in its path.

In what may or may not be a related development, the Alternative News of Turkmenistan claimed on July 17 that the harvest had ended in Dashoguz province with output at levels far lower than forecast.