Turkmenistan: Make deals against a sea of troubles

Though the gas deal with Russia looks disappointing, it appears to have led to a noteworthy breakthrough in bilateral ties. 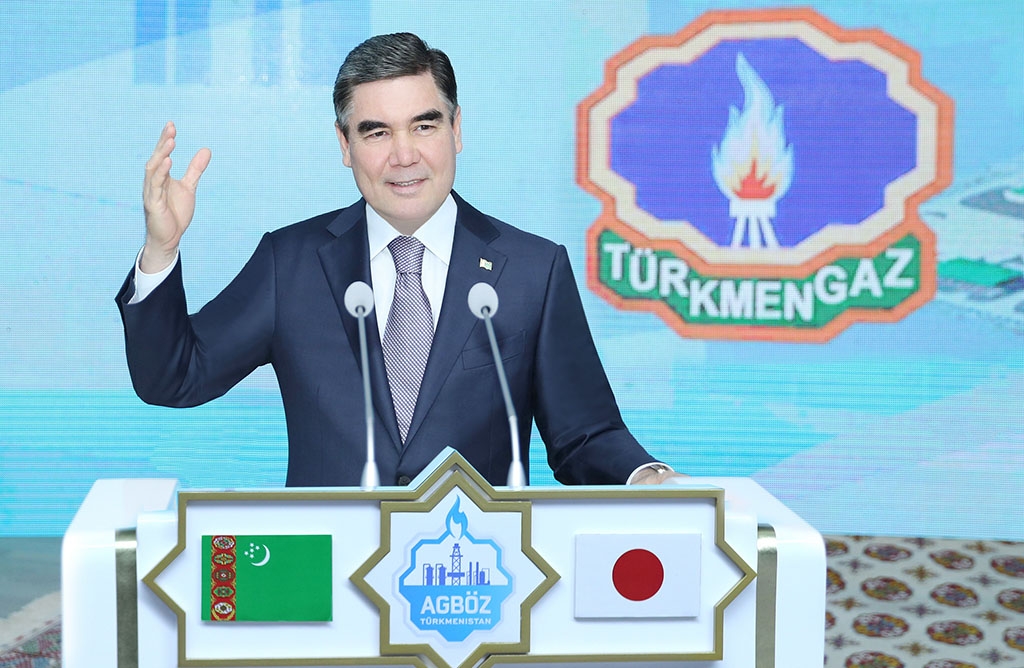 The Turkmen-Russian gas saga came to something of a resolution on July 3. (state media)

“Pul ýok” are words no Turkmen ever wants to see or hear.

But paper signs reading exactly that – “no money” – have reportedly begun appearing on ATMs in the capital, Ashgabat.

Vienna-based website Chronicles of Turkmenistan reported on July 8 that only around 20 or 30 people who got in line at the cash machines over the weekend were able to withdraw money. Countless others went without. This problem most especially affects state workers and retirees, since they have their pay and pensions paid directly onto bank cards.

Awkward. Only a couple of weeks ago state television news was showing clips of contented ATM users taking their cash and pressing it to their foreheads in a gesture of grateful blessing.

At least the Turkmen government may now hope to get a little money from the Russians, although nowhere near what they would have liked. The recurrent saga over natural gas transactions between Russian and Turkmenistan came to something of a resolution on July 3, when Gazprom announced it had committed to buying 5.5 billion cubic meters (bcm) of gas annually from the Turkmens for the coming five years.

There had been loose talk of a 10 bcm deal, following an initial, very short-term, ice-breaking deal reached earlier this year for the delivery of around 1 bcm of gas between April and July. This new arrangement means Turkmenistan will be supplying Russia with 30 percent less gas over five years than it did in 2008 alone, when deliveries reached a peak of 45 bcm. As ever with these deals, no financial terms have been disclosed.

Even if the deal was disappointing, it still appears to have led to a noteworthy breakthrough in bilateral ties. According to a report from RFE/RL’s Turkmen service, Azatlyk, Turkmenistan will finally resume issuing documents to Russian dual nationals, some 10,000 people. Russian Foreign Minister Sergei Lavrov noted in comments to the media last December that the topic was on the agenda.

Chronicles of Turkmenistan remains a little skeptical and noted that enquiries with the migration service in Ashgabat and Dashoguz yielded no firm information about a change of policy.

Meanwhile, pro-government news website Orient talked up rumors Gazprom could invest in Turkmenistan's humongous Galkynysh gas field. It is a tantalizing possibility. Gazprom is certainly putting down solid roots in neighboring Uzbekistan. For anybody looking for possible meaning in patterns, it may be of note that the Russian energy giant bought 5.5 bcm of natural gas from Uzbekistan in 2017, one year before successfully negotiating the extension of a production sharing agreement on the Shakhpakhty field, located in western Uzbekistan.

The Europeans also keep sniffing around, although it is uncertain to what effect. Federica Mogherini, the European Commission’s outgoing foreign affairs chief, passed through Ashgabat on July 6. She met with Foreign Minister Rashid Meredov and parliament chairperson Gulshat Mamedova, but notably not with President Gurbanguly Berdymukhamedov. Considering Mogherini’s status, this feels ineluctably like a snub.

The visit ran below the fold on the front page of the Neutral Turkmenistan daily, which is not that surprising since place of pride is reserved always for Berdymukhamedov himself. The newspaper was, however, sure to credit Mogherini’s sojourn as an example of "practical implementation of the initiatives driven by President Gurbanguly Berdymukhamedov to address the global issues of our time: ensuring world peace, stability and sustainable development.” Mamedova gave Mogherini a copy of one of Berdymukhamedov’s books.

New York-based advocacy group Human Rights Watch called on Mogherini to press for an improvement to human rights standards. Doing so would have marked a veritable departure for this most circumspect of diplomats. Brussels and Ashgabat held the eleventh round of their Human Rights Dialogue in March, but the format serves no real discernible purpose. Despite claims from Brussels that “the rule of law and respect for human rights are essential elements of the EU-Turkmenistan relationship,” Mogherini did not even mention the issue in her remarks at the opening of the EU's mission in Ashgabat.

Turkmen government readouts made mention only of discussions within the context of the new EU Strategy for Central Asia, which encompasses regional cooperation, economic development, energy security, the environment and transportation. The official state media writeup also claimed that work towards developing a Trans-Caspian pipeline had intensified, but it provided no details.

On this latter point, Moscow, which apparently now enjoys slightly better graces in Ashgabat, remains unchanged in its objections. Russia’s ambassador to Azerbaijan, Mikhail Bocharnikov, told Caspian Energy magazine in an interview published on July 4 that any undertaking in the Caspian would have to abide by international agreements on environmental protection.

“The far-from-obvious benefits to certain ‘economic operators’ should not prevail over the long-term interests of people in Caspian littoral states and the protection of this body of water’s ecosystem,” Bocharnikov said.

Berdymukhamedov had glowing news to share at the July 5 Cabinet meeting – the economy had grown by 6.2 percent in the first half of the year. The swiftness with which such figures are produced cannot but raise suspicions as to their reliability. The president did not dwell in much detail on how this growth had been achieved, other than to say that “good results were achieved in the production of goods and the provision of services.” He then went on to say that Turkmenistan is at this moment engaged in the construction of 2,000 “large industrial and social facilities” worth a total of $30 billion. That is a staggering claim given that Turkmenistan’s entire gross domestic product in 2018 was around $40 billion. 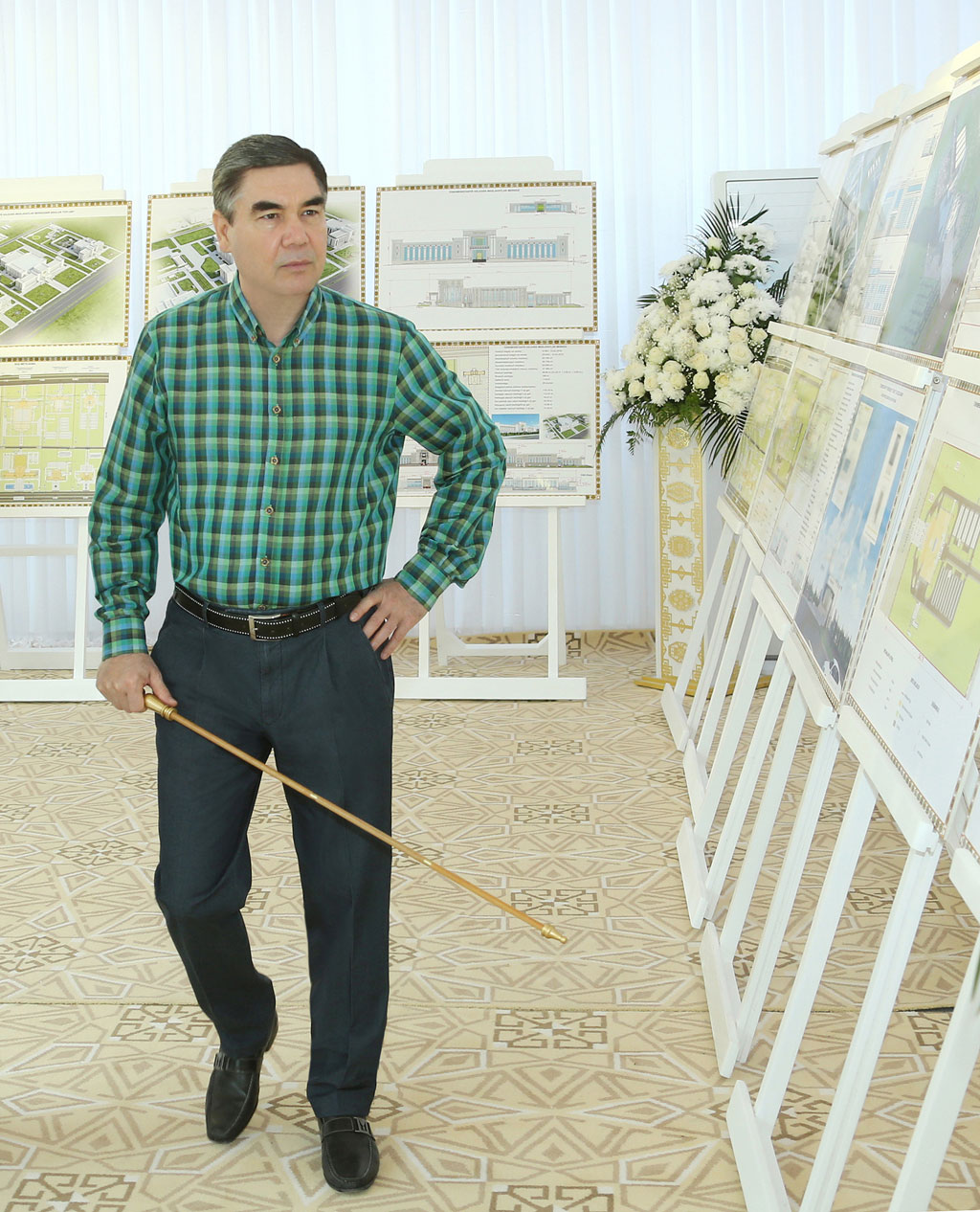 This week, Berdymukhamedov treated himself to another inspection of the blueprints and building sites of yet more of his Ozymandian follies. His latest wheezes include an International Congress Center, a hotel, and two state bank headquarters. The congress center will rise three stories on an area the size of Moscow’s Red Square and is needed, the government website explains, because “Ashgabat has begun to regularly host large regional and global forums.” In his trademark eye-catching manner, Berdymukhamedov rocked up at the construction sites driving himself, in a 2019 model BMW X5 luxury SUV, and ambled around the windswept grounds in a loud green plaid shirt.

As always, Berdymukhamedov’s fantastical vision of things never sits comfortably alongside the impression of pervasive incompetence conveyed by his relentless habit of chastising and firing underlings. On July 7, state media announced that the president had reprimanded a slew of officials, including Finance and Economy Minister Batyr Bazarov. Myrat Archayev, the chairman of Turkmengaz, the company that had only four days previously inked the Gazprom contract, was severely reprimanded, meaning he is on thin ice for the foreseeable future.

And just to fuel more suspicion about government figures, Khalykdurdy Gurbanov was fired as head of the State Statistics Committee for shortcomings and an “inability to cope with the duties assigned to him.” His replacement is Bazarov’s former deputy, Silap Velbegov.

Still, it is summer, so at least some relaxation awaits the nation’s harried civil servants. Alas, as RFE/RL has reported, many government employees are being forced, on pain of dismissal from their jobs, to purchase overpriced package holidays in Awaza, the desperately underused multibillion holiday resort built according to Berdymukhamedov’s whims.