Turkmenistan: Many children left behind

Corruption fighting when convenient, thawing ties with Russia, and the region’s highest levels of child mortality: This and more in our weekly Turkmenistan bulletin. 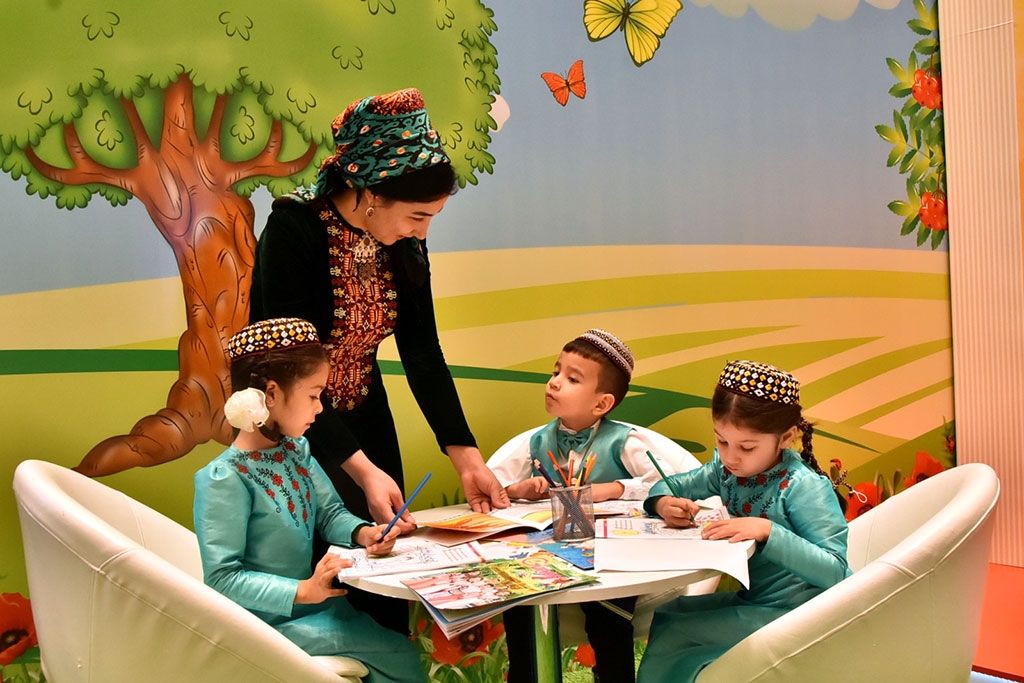 UNICEF data show Turkmenistan has the highest mortality rate for children of any Central Asian state by a significant margin. This may have something to do with the fact that medical goods are chronically in short supply and Turkmen are instead urged to rely on the president’s own folk remedies. (photo by state media)

The trial has begun in Germany of a former manager at Munich-based engineering company MAN who is accused of arranging 8.4 million euros ($9.3 million) in bribes to officials in Turkmenistan between 2000 and 2007.

The 69-year-old defendant, who was not named in the dpa news agency report on the December 9 opening of the trial, asserted by way of mitigation that "in Turkmenistan, corruption was the order of the day.”

Little has changed in the intervening years.

On December 3, former Interior Minister Isgender Mulikov, who was fired in theatrical manner by President Gurbanguly Berdymukhamedov two months ago, reappeared on the nation’s TV screens. His head had been shaven and he was cuffed and dressed in dark prison garb. As the evening news explained, searches of Mulikov’s home had allegedly turned up a trove of jewelry and watches, and dozens of stacks of U.S. dollar bills – material evidence of his graft.

Meylis Nobatov, a former head of the State Migration Service who appears to have served as Berdymukhamedov's head of security since late 2017, also confessed to corruption and extorting businesspeople.

Sources speaking to Amsterdam-based Turkmen.news said Mulikov had been given a 20-year prison sentence. The Vienna-based Chronicles of Turkmenistan reported that Mulikov and Nobatov received 15 years apiece. Either way, barring some generous act of presidential clemency, neither is likely to be seen for the foreseeable future, given Ashgabat’s usual policy of burying its most prominent prisoners within the penitentiary system.

It seems highly plausible that Mulikov and Nobatov were indeed far from clean, but it would be naïve in extreme to credit Ashgabat with much seriousness in its purported battle against corruption. Theirs were just the latest in a string of jailings that the rumor mill has linked to a possible internal power struggle. Just as likely is that Berdymukhamedov is growing more ruthless in his determination to deflect blame for Turkmenistan’s self-induced economic crisis away from himself.

On December 6, he warned of further personnel reshuffles by the end of the year if results did not improve at key state enterprises.

Berdymukhamedov never explicitly acknowledges that there is any crisis and instead proclaims that the economy is growing at a steady clip. During a November 6 speech to his cabinet, he reiterated the forecast for 6.3 percent gross domestic product growth in 2019. He also claimed that his efforts to increase the private sector's share of the economy were succeeding. Reprising a well-rehearsed theme, Berdymukhamedov called for the "further strengthening of market institutions, the development of free competition, and the stimulation of private entrepreneurial initiatives."

In the same speech, he called upon Deputy Prime Minister Chary Gylydzhov to maintain "strict control over the plentiful provision [of goods] at the country's markets and stores at affordable prices."

This latter effort does seem to have borne some fruit. RFE/RL's Turkmen service, Azatlyk, reported on December 9 that some staple foodstuffs have been in more plentiful supply in the capital in recent days, although shortages are still widespread in Mary. Berdymukhamedov's son, Serdar, who is apparently being groomed as his successor, is being cast as the savior. On December 5, he launched a new greenhouse for cultivating tomatoes in the Geoktepe district of Ahal province, where he serves as governor. He then attended the inauguration of a similar facility three days later in the province's Kaakhkinsky district.

Still, there are clues that anxiety is creeping. Berdymukhamedov on December 5 held his second tête-a-tête in less than three weeks with Gadyrgeldy Mushshikov, the head of the Supreme Audit Chamber. Mushshikov has been charged with exploring ways of alleviating the sore but unacknowledged question of chronic unemployment.

In a more positive development, Turkmenistan Airlines flights to the European Union resumed on December 8, a welcome reprieve 10 months after the carrier was barred by the European Aviation Safety Agency.

Strict isolationism may be very slowly going out of fashion. At the end-of-week Cabinet meeting, which was devoted to the 25th anniversary of Turkmenistan’s declaration of permanent neutrality, Berdymukhamedov made a point of reminding his audience that Russia was his country’s "strategic partner.” No other partner enjoys that honor.

This year has seen a notable thawing in ties with Russia. That brought with it the resumption of state-owned Gazprom’s purchases of Turkmen gas in April. Another energy link came to light on December 2, when Reuters reported that Turkmenistan would once again export fuel and diesel via Russia, though credit for the effort seems to lie with trading house Vitol rather than Ashgabat.

Trade ties with Turkey are also growing, which Berdymukhamedov welcomed in his speech. Ashgabat-based news outlet Orient cited the head of the Turkmen-Turkish Business Council as saying that bilateral trade was already $89 million above the amount recorded in 2018. Ashgabat reportedly bought $565 million in Turkish goods but exported $370 million.

Baku-based Trend news agency dwelled understandably on the fact that Berdymukhamedov stated that one of his foreign policy priorities was to strengthen “neighborly dialogue” with Azerbaijan.

Turkmen.news noted on December 4 that UNICEF data show Turkmenistan has the highest mortality rate for children of any Central Asian state by a significant margin. This may have something to do with the fact that medical goods are chronically in short supply and Turkmen are instead urged to rely on Berdymukhamedov's own folk remedies, many of them collated in one of the many books he has supposedly authored. Those troubling figures were reported at an inauspicious time, just as the president was signing off on the 2020-2025 National Strategy on Early Childhood Development. As ever in Turkmenistan with such sweeping strategy announcements, no details are forthcoming.

The unending saga of the Turkmen section of the Turkmenistan-Afghanistan-Pakistan-India, or TAPI, natural gas pipeline took another turn on December 4, when it was announced that Italian energy consultant RINA had been selected as the technical supervisor for the project. This appears to suggest not only that the pipeline has not been finished – as was once claimed – but that work may not even have started. Berdymukhamedov used to speak of gas beginning to flow through TAPI by the end of 2019. The new target, 2021, is thus already unrealistic.