The hidden impact of coronavirus, a new secret police chief, and reading the government’s imagined data to understand its priorities and mindset. This and more in our weekly Turkmenistan briefing. 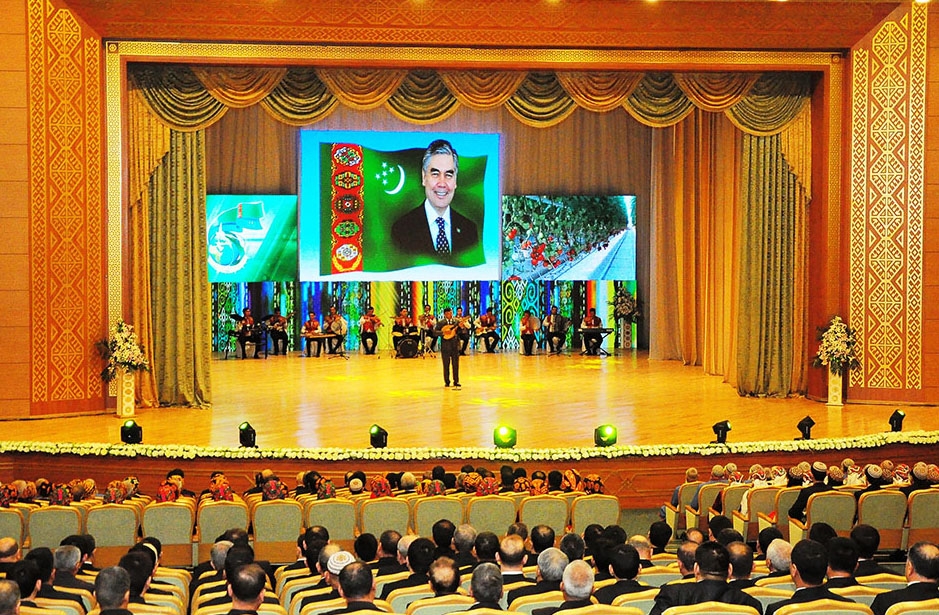 The president’s ancestral region this week received an award for being the country’s best district. (state media)

With global anxiety over the spread of the coronavirus showing no immediate signs of abating, health officials across the world are advising their citizens to self-isolate.

Turkmenistan has been doing that for decades already, but this has bought it little peace of mind over the course of this ongoing epidemic.

RFE/RL’s Turkmen service, Radio Azatlyk, reported on February 17 that municipal workers in the capital, Ashgabat, have been ordered to step up their campaign to kill stray dogs and cats as part of precautionary measures. Animal welfare is one of the very few areas in which civic activism appears to be permitted in Turkmenistan, but efforts to mitigate this and earlier culling campaigns have produced few results.

Authorities are at least acknowledging the existence of a potential threat from the illness. Health workers have since earlier this month been handing out illustrated booklets at hospitals, schools and other institutions with instructions on how to avoid infection.

State media and officials are, however, almost entirely avoiding actually mentioning the coronavirus directly, with rare exceptions. Government-aligned Gundogar News (not to be confused with a similarly named opposition-run website) fumed in its Fake News rubric that foreign-based independent media has been disseminating disinformation – such as one unconfirmed report about a coronavirus fatality – but that indignation omits to remind readers of the prevailing information vacuum. People being kept in quarantine in Turkmenistan – their number is not known – are even being forbidden from using phones.

Supposed prevention measures are taking their toll on trade with China too. At least one Turkmen trader importing goods from there told an Azatlyk reporter that they had lost $30,000 worth of material as a result of confiscation by border officials. Officials tell the businessmen that the goods are being destroyed, although the suspicion is that they are being stolen.

One line of trade, in the other direction, has seen an unexpected surge though. Turkmenistan.ru, a website run out of the Turkmen Embassy in Moscow, reported on February 16 that Ashgabat sold 1 million protective masks to China for $200,000. (Curiously, it fell to this website to assert that no cases of COVID-19 have yet been identified in Turkmenistan).

The reorganization of key security bodies advanced again this week with President Gurbanguly Berdymukhamedov’s decision to fire Yalym Berdiyev as head of the National Security Ministry, the successor agency to the KGB. This decision was to be expected. It was only last month that Berdiyev was demoted two notches, from colonel-general to major-general, and dismissed from his post as secretary of the State Security Council.

What fate awaits Berdiyev is not yet clear. He has been replaced by Col. Gurbanmyrat Annayev, who has served as deputy National Security Minister since January 2018. Prior to that, Annayev worked as deputy head of the Interior Ministry. There is little public available information about this new security services chief, which means one may only speculate about the significance of the fact that he happens to share a surname with the president’s grandfather, Berdymukhamed Annayev.

The older Annayev, incidentally, was born and grew up in the family’s ancestral village of Yzgant, which this week played host to an annual award ceremony for the country’s best district. The Geok-Tepe district, where Yzgant is situated, was awarded $1 million after being found to have performed best in attaining agricultural production targets, successfully implementing the government’s regional development program and being a generally great place to live.

This is all very cozy. Geok-Tepe is one of the seven districts of the Ahal province, of which Berdymukhamedov’s son, Serdar, was until very recently the governor.

In his first international engagement since being appointed Industry and Construction Minister, 38-year-old Serdar Berdymukhamedov traveled to Russia’s republic of Tatarstan, where he met with President Rustam Minnikhanov. There seemed to be no particular purpose to this visit other than touching base and exchanging mutual assurances about prospects for enhanced cooperation.

“There is great potential in oil exploration, oil production, gas transportation, automobile, aircraft and ship construction, energy, chemicals, pharmaceuticals, medicine, construction, agribusiness, innovation and information technology,” Minnikhanov said, without giving much specific detail on how any of that potential would be actualized.

The government this week published its economic data for 2019, and this made for the usual hyperbolic and uninformative reading. Gross domestic product grew by 6.3 percent, industrial production increased 4.1 percent, and trade expanded by 14.2 percent, the government claims. By way of validation for these wholly unverifiable and probably bogus achievements, the government turned to its dependably credulous handmaidens at the International Monetary Fund, which it approvingly noted had characterized Turkmenistan as one of the world’s fastest-growing economies.

Notwithstanding the mist of codswallop statistics, such reports offer clues about the government’s priorities and mindset. It was reported, for example, that 65.3 percent of foodstuffs was produced by the private sector. This type of figure is invariably presented as a vindication of both Turkmenistan’s supposed transition to market principles and its import-substitution agenda.

There will also doubtless be continued talk this year about Turkmenistan positioning itself as an exporter of processed food goods – export volumes are said to have grown by 4.6 percent year-on-year in 2019. But the ludicrously fictitious official exchange rate, which is stubbornly maintained at 3.51 manat to the dollar (six times below the black-market rate) surely make nonsense of such projections and boasts.

Numbers are thrown around with such abandon that there is little way to make sense of them. In a February 7 Cabinet meeting, for example, Berdymukhamedov said, without specifying a timeframe, that state investment programs envisioned expenditure of $35 billion on construction projects. More than $10 billion worth of “industrial and socio-cultural” projects – 1,704 of them, to be exact – were commissioned in 2019 alone, the president said.

European Union-Turkmen relations this week reached a qualitative new level, to borrow the stodgy language of post-Soviet diplomacy, with the accreditation of Diego Ruiz Alonso, who is now formally recognized as the head of the recently upgraded EU representative office in Ashgabat. The Turkmen Foreign Ministry hailed this as a milestone in the development of political, economic, legal, humanitarian and environmental cooperation.

That is, of course, bunkum. Brussels has evinced not even the slightest interest in Turkmenistan’s political or humanitarian situation, and it is hardly likely to start doing so now. The primary item on the agenda is energy – namely, how to get Turkmen natural gas to Europe. This enhanced formalization of ties should, in theory, put that dialogue on a surer footing.