Uniting in paranoia with Russia, warming to Iran, and opening for business. This and more in our weekly Turkmenistan briefing. 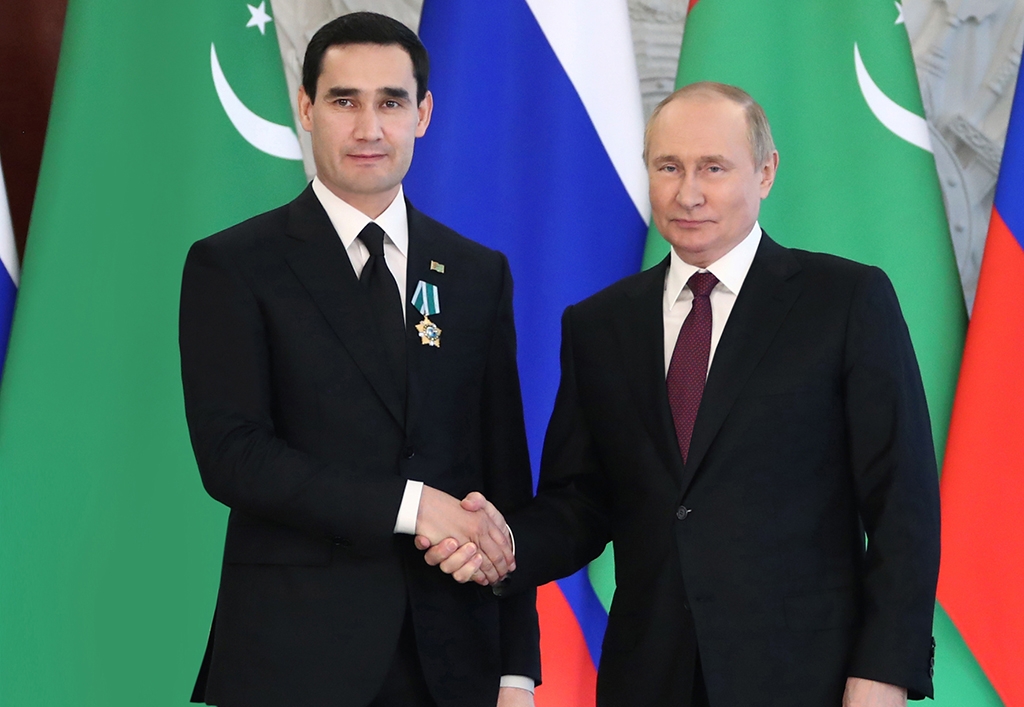 Serdar Berdymukhamedov has made his first official outing onto the international stage as president of Turkmenistan with a visit to Moscow to meet his Russian counterpart, Vladimir Putin.

He had traveled to Saudi Arabia earlier in the month, but that was for the ostensibly personal motivation of performing a pilgrimage to Mecca.

Paying tribute to Putin fits the mold of Berdymukhamedov’s father, Gurbanguly, who performed the same trip in April 2007, not long after he assumed the presidency. The exchange of verbal niceties performed now and then sound in many ways identical.

Putin and Berdymukhamedov talked generically during their June 10 meeting about how bilateral relations have flourished over the years. Some words of praise were reserved for the importance of the Treaty of Friendship and Cooperation signed between the countries 20 years ago. There was no getting around the fact that COVID-19 badly dented trade, though.

“During the pandemic year, our trade turnover unfortunately declined somewhat, by a little over 10 percent. But despite all external difficulties, in the first quarter of 2022, it has increased by more than 40 percent [year on year], and this is very serious progress,” Putin said.

Russian state news agency TASS provided more exact figures. The $171 million in trade done in the first quarter marked an increase closer to 45 percent. The figure for the full year in 2021 was $865.1 million.

These figures do not account for Turkmen gas deliveries to Russia.

The Caspian came up too. Putin talked about how Russia and Turkmenistan attached great importance to pursuing collective approaches to “security, economic partnerships, conservation of natural resources and environmental well-being" in the energy-rich basin. Russia has generally been unenthusiastic over the appearance of a trans-Caspian gas pipeline, which would allow Turkmenistan to get its plentiful fuel supplies to European buyers. These feelings are only likely to have intensified against the backdrop of Russia’s increasing hostility with the West. Putin’s explicit association of the themes of security and natural resources in the Caspian is not subtle.

The reality is that these are two regimes united in their paranoia. Another topic touched on in a visit-capping joint declaration was the countries’ shared fear over the “use of modern information and communication technologies for illegal and harmful purposes, including to interfere in the internal affairs of states and undermine their sovereignty.” The joint declaration envisions cooperation through to 2025 to shore up defenses on this front.

Russia typically avoids making a public show of imposing its anti-Western positions on dialogue with Central Asian partners, but Putin could not quite resist the temptation. The Russian leader said after his talks with Berdymukhamedov that it was incumbent on the United States and its allies to take primary responsibility for post-conflict reconstruction in Afghanistan. At the same time, the Kremlin predicates its Afghanistan policy on what it terms the Moscow consultation format, which envisions the involvement of special representatives from six nations: Russia, Afghanistan, China, India, Iran and Pakistan. Putin said Russia was prepared to work with Turkmenistan too within that format as Afghanistan is integrated into “regional infrastructure and logistics projects.”

Washington is not sitting idly by.

“The parties discussed cooperation within bilateral and multilateral formats to resolve the situation in Afghanistan,” a Turkmen Foreign Ministry statement read. “It was noted that it is expedient that a consolidated approach to ensuring peace and security in Afghanistan and intensifying economic and humanitarian cooperation with that country be pursued.”

No more details than that were divulged.

Meanwhile, the Taliban regime has said that it plans to resume construction work on trans-Afghan TAPI gas pipeline project within the coming four months. News website TOLO cited Esmatullah Burhan, a spokesman for the Mines and Petroleum Ministry in Kabul, as saying work had been held up by land acquisition issues. No talk was made of money, of which the Taliban has short supplies.

Berdymukhamedov is not done with his travels. On June 14, he was scheduled to fly to Iran for a two-day official visit. He was in Tehran as recently as January, although he was serving as an envoy for his father, the now-former president, at the time.

Lest Persian Gulf neighbors get jittery about this growing Iranian engagement with Central Asia, the Turkmen Foreign Ministry has signaled that Berdymukhamedov may pay another visit to Saudi Arabia later this year.

This all appears to be of a piece with Berdymukhamedov’s open-for-business stance. In that spirit, COVID-19 precautions are quickly becoming a thing of the past.

Starting this month, wearing a protective mask outside is no longer required. A health advisory published in the Neutral Turkmenistan newspaper on June 7 advises that use of the masks is required only inside buildings and on public transport.

As Vienna-based Chronicles of Turkmenistan has noted, however, the public has been apprehensive about whipping off masks, which may explain why Berdymukhamedov felt the need on June 11 to order the government to step up the information campaign in newspapers and on television to explain when and where it is necessary to wear medical masks.

At that same cabinet meeting, Berdymukhamedov urged Mammetkhan Chakiyev, the head of the state agency for transport and communications, to start working on reopening Turkmenistan’s international traffic links. This has already begun in small ways, such as the reopening of border crossings with neighboring Iran, and the resumption of scheduled flights to Kazan, in Russia, and to Dubai. Building on that will usher the way to Turkmenistan’s return to normality. Relative normality, that is.