Although Turkmenistan is rarely mentioned as a prospective member of the Moscow-led EAEU trading bloc, that notion is quite obviously on the Kremlin’s mind. Our weekly briefing. 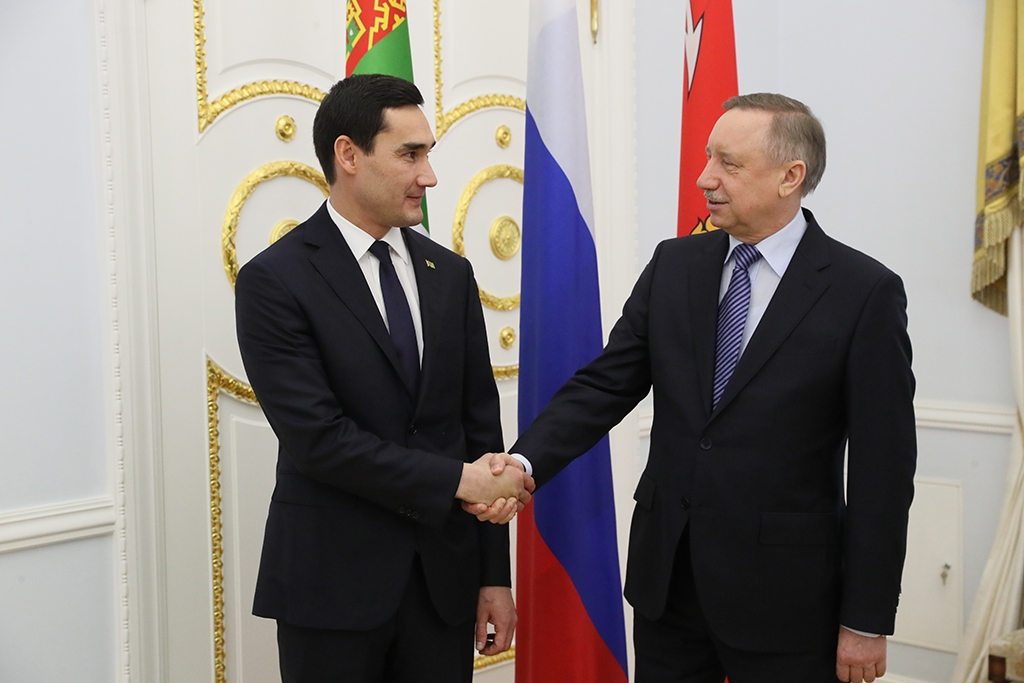 Serdar Berdymukhamedov, Turkmenistan’s president-in-waiting and son of the incumbent, on March 30 embarked on a four-day trip to Russia as part of an official government delegation. The outing looked like yet another dress rehearsal.

Official readouts of meetings in Moscow allude to mostly humdrum business, although there are hints of noteworthy developments.

The delegation was led by Foreign Minister Rashid Meredov, as is customary when senior Turkmen delegations go overseas, but Berdymukhamedov junior was also given some light document-signing duties. It was his presence that was significant rather than what he did, which was very little indeed, by all appearances.

Most of the joint agreements were overseen by the respective officials in charge of areas like health, agriculture, customs and finance.

Cooperation on health is of particularly acute relevance in light of the COVID-19 pandemic. Turkmenistan has lied to the international community in claiming it has detected no cases and may as a result be seen as a low priority for assistance. Sure enough, Ashgabat looks to be leaning heavily on Russia’s Sputnik V for its vaccination program, the scale and implementation of which is shrouded in mystery. Turkmenistan was also the first country in the world after Russia to register the EpiVacCorona vaccine, which has been developed by Russian drug-maker Vector.

Turkmen official sources are loath to mention the dreaded c-word, leaving it to the Russians to report the fact that Health Minister Mikhail Murashko and his Turkmen counterpart, Nurmuhammet Amannepesov, mainly discussed Sputnik V supplies and stepping up “expert interactions between medical organizations” in the two countries.

Ashgabat despises being seen as a needy recipient of assistance, though, so the visit of the Turkmen delegation was timed to come ahead of a faintly absurd exchange of humanitarian goods. Russia media reported on March 5 that two containers filled with disposable masks and medical gowns donated by Turkmenistan had been unloaded at a port in Astrakhan. TV footage showed the donation even included cookies.

Just to compound the pointlessness of it all, Turkmen media were on April 1 reporting that Russia had dispatched 12 tons of humanitarian aid on an Ilyushin-76 owned by the Emergency Situations Ministry. That aid too was protective gear of the exact same kind the Turkmens sent north by boat.

These may be trifling episodes, but they do nonetheless underscore the relentless tune of bonhomie sung jointly by Russia and Turkmenistan. Moscow’s bear-hug embrace of Ashgabat becomes ever more certain with each of these exchanges.

The trade figures are indicative, as Russian Deputy Prime Minister Alexei Overchuk remarked approvingly at a March 30 meeting of the Intergovernmental Russian-Turkmen Commission on Economic Cooperation.

That’s no mean feat for a year when global trade slowed sharply.

The priority is now on smoothing the road and growing those numbers only further.

Another of the agreements signed at the intergovernmental meeting was one between Russia’s dreaded Rospotrebnadzor health and consumer affairs watchdog and the Turkmen Health Ministry. Dreaded because it is invariably Rospotrebnadzor that slams the door shut when anything is found or suspected to be wrong with foreign food imports. And this is a matter of some concern at the moment as Rosselkhoznadzor, an agricultural watchdog not dissimilar to Rospotrebnadzor, has been raising concerns about Turkmen tomatoes being infected with brown rugose fruit virus.

In short, harmonization of sanitary, customs and financial regulation standards is the name of the game. Although Turkmenistan is rarely spoken of as an imminently prospective member of the Moscow-led Eurasian Economic Union, or EAEU, trading bloc, that notion is quite obviously on the Kremlin’s mind. Berdymukhamedov junior’s only task was, tellingly enough, to ink a document with the deceptively bland title of Intergovernmental Agreement on the Promotion of Interregional Cooperation.

For all this goodwill, things are still hard for Turkmen students aspiring to go to Russia. Moscow-based TASS news agency reported April 4 on how Russia has since late March reopened its doors, after a long coronavirus-induced hiatus, to young people from dozens of countries, including Kazakhstan, Kyrgyzstan, Tajikistan and Uzbekistan. Turkmenistan is absent from the list.

To be fair, it is not as though Turkmen students have many options when it comes to physically getting to Russia, given the lack of transportation links at the moment. Russia’s Foreign Minister Sergei Lavrov told his counterpart, Meredov, at an April 1 meeting also attended by Serdar Berdymukhamedov, that “we will do everything possible so that, while there are temporary interruptions in regular air traffic, [Turkmens] can continue their studies, including through remote formats.”

Foreign travel may still be off the table, but things are opening up a little inside Turkmenistan. As had been promised, the railroad route between Ashgabat and the northern city of Dashoguz resumed service on April 1, as did long-distance bus travel from the capital to Mary.

The faithful and culture vultures likewise have cause for cheer. The parastatal muftiate has announced that all mosques have resumed regular functioning. Restrictions on visiting mosques had been in place since July. And the Emergency Situations Committee has decreed that theaters may stage performances on Friday, Saturday and Sunday evenings.

No news of the circus, but there is always the evening news bulletin for some light diversion.

This week’s slice of televised presidential japery was delivered from the International Akhal-Teke Equestrian Complex, which President Berdymukhamedov visited wearing his hat as commander-in-chief of the armed forces. The justification for once again donning camo gear was that he was inspecting stables run by military and law enforcement agencies. The annual Akhal-Teke beauty contest is due later this month.

Proceeding to the racetrack, he stood all but alone in the stands as horses were raced for his exclusive enjoyment. A horse called Nyazik, owned by the Supreme Court, won the 1,000-meter race. Just to reiterate, the Supreme Court as an institution owns a racehorse. So do all national-level government bodies, in fact.

The president later in the same day proceeded to inspect progress in the construction of the future International Alabai Sheepdog Association. He was given an update by his son, who happens to chair the association. Serdar Berdymukhamedov has in recent weeks devoted more time to dog-related business than any other activity, despite his recent major promotions, if state media coverage is any guide.