The president may be deluded, but even he has come to realize that the crisis already upon his heavily energy exports-dependent economy is going to be very difficult to weather without help. 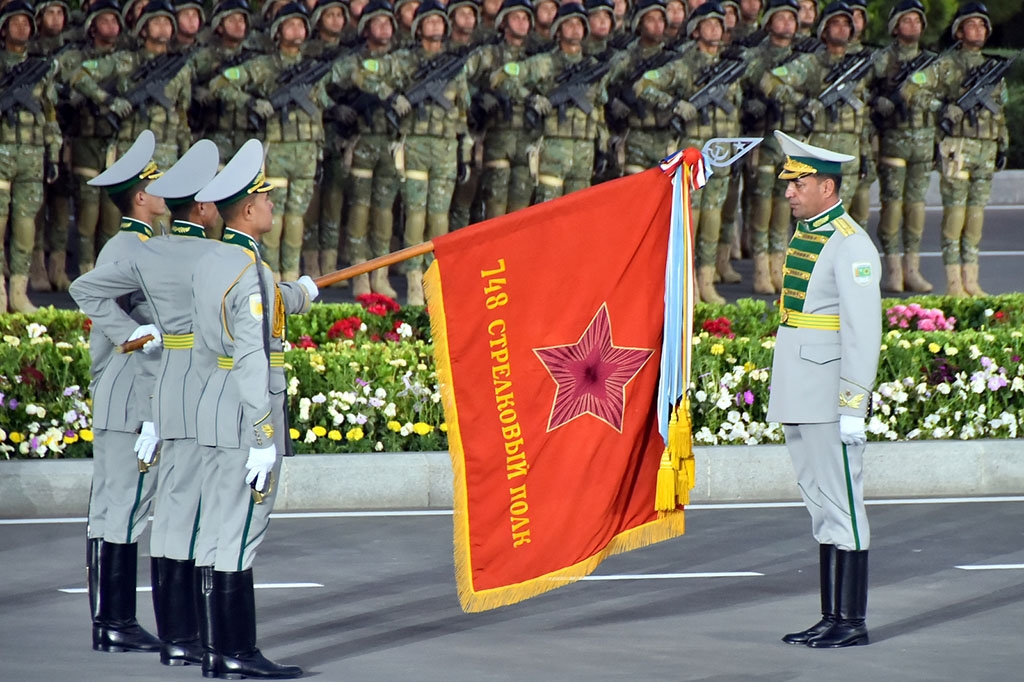 Cozying up to the Kremlin (state media)

Turkmenistan has never before in its post-independence history held a military parade to mark Victory Day, the anniversary of Nazi Germany’s capitulation in World War II. The government decided, however, that this was the May 9 on which to end that dry stretch.

Propagandist lackeys contrived somehow to make this event too about the personality cult devoted to President Gurbanguly Berdymukhamedov. Turkmenistan borrowed a leaf from Russia’s Immortal Regiment tradition by organizing a procession of people holding up portraits of war veterans. At the head of this particular parade was a white-suited officer carrying a picture of Berdymukhamed Annayev, the president’s late grandfather, who has been made the subject of some mythmaking in the past.

Specially for the occasion, the battle banner for the regiment in which Annayev served was delivered to Ashgabat. Even state media could not elaborate much on that, since it is likely unknown what, if any, role Berdymukhamedov’s goggle-eyed progenitor played in advancing the cause of the war. 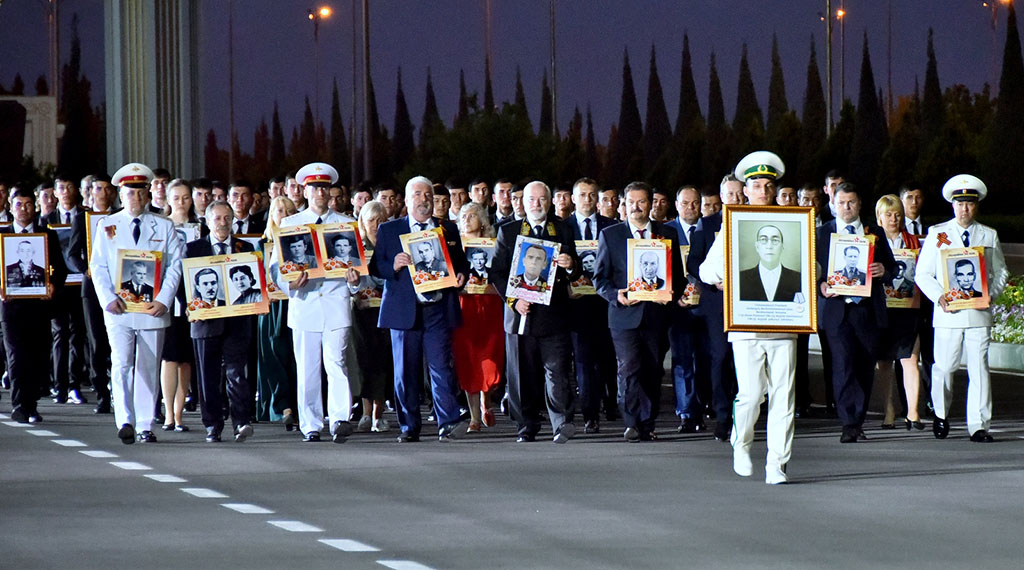 A jarring piece of politics was injected into proceedings through the presence of Russian Deputy Defense Minister Alexander Fomin, who spoke about how some unnamed countries are “attempting to revive Nazi ideology,” which is Muscovite code language for Ukraine, the Baltic states and other nations that have dared question the virtues of post-war Soviet rule. His comments were carried by the Turkmen state news agency, implying an endorsement.

It is not like Ashgabat to allow itself to get dragged into such disputes about historical memory, so it is tempting to read this episode as Turkmenistan cozying up to the Kremlin.

In another approbation-seeking gesture, Turkmenistan has gifted 1,000 tons of Turkmen-made textiles, construction materials and food to Russia to somehow ease the burden of that country’s battle against COVID-19. (Ashgabat continues to insist the virus has not penetrated its own border). This aid elicited a note of gratitude on May 10 from Russia’s Foreign Ministry in recognition of Turkmenistan’s “friendship and good neighborliness.”

Berdymukhamedov may be deluded, but even he has come to realize that the crisis already upon his heavily energy exports-dependent economy is going to be very difficult to weather without help. The assistance should ideally come from an outsider who will not make all manner of impertinent suggestions about transparency, reforms and such.

At the May 8 Cabinet meeting, Berdymukhamedov listened to the usual catalogue of fantasies about the stellar economy. Growth of gross domestic product in January-April, as compared to the same period last year, came in at 6.3 percent.

The volume of foreign trading, most of which is accounted for by natural gas sales to China, increased by 1.5 percent. No mention is made in the state news agency report on the Cabinet meeting about trends in energy exports. It is implied instead that trading activity grew on the back of increased textile exports.

On the point of gas exports, though, it is intriguing to see one Ashgabat-based outlet, Arzuw, which has recently undergone something of an overhaul, flirt ever so gingerly with the bold experiment of acknowledging the existence of gravity in a tame rendering of a fairly dry S&P Global report about declining Chinese purchases from Central Asia.

The S&P Global article, which is based on an interview with the chief executive of Uzbekistan’s state oil and gas company, indicates that more cuts are to come.

"China requested a cut, but indicated that any reduction in gas supplies would be carried out proportionally between Turkmenistan, Kazakhstan and Uzbekistan," Mekhriddin Abdullayev told the energy-focused outlet.

Turkmenistan delivered 33.2 billion cubic meters of gas to China in 2019, far more than either Kazakhstan or Uzbekistan, meaning it will be enduring the most pain as a result. That said, Beijing’s customs data from March, when the volume of deliveries had already come into effect, showed Turkmenistan exporting $550 million of goods (certainly almost all gas) to China in one month alone. Outstanding debts notwithstanding, these are colossal sums and attest to the fact that Ashgabat’s troubles remain mainly corruption, waste, mismanagement and wrong-headed priorities rather than lack of income.

Berdymukhamedov grumbled at the Cabinet meeting about how the country is not making enough cement, something that the Industry Minister – a.k.a. Serdar Berdymukhamedov, the president’s son and presumed heir – has the job of fixing. There is apparently not quite enough building material to properly implement the construction agenda that the president had suggested just weeks ago might slow in recognition of leaner times.

With those important matters out of the way, the president then got down to delivering some painful truths. The coming troubles will be worse than anything seen in the financial crisis of the late 2000s or during the oil price falls of 2014-15. And so, said Berdymukhamedov, there will have to be significant reductions to the state budget. Members of the Cabinet have been instructed to propose commensurate revised spending plans once mid-year economic performance bulletins come through.

The president did warn that welfare spending, such as it is, should not be touched, however.

Not a week passes now without a fresh report of public anger about food shortages in the regions. Vienna-based Chronicles of Turkmenistan reported on May 10 that the head of the Turkmenbashi district in the Dashoguz province was, while he was out inspecting cotton fields, manhandled by residents indignant at the scant supplies of subsidized flour at the local state store. People are particularly exercised that more emphasis has been placed in the area on cultivating cotton, which can be used to raise foreign currency but cannot be eaten, instead of wheat. Police eventually got involved, Chronicles reported.

Amsterdam-based Turkmen.news reported on May 11 about the implementation in the western Balkan province of what is in effect a ration card system. Once the formalities are arranged – and this includes paying a small fee for the processing of the ration card – households may with their document buy staples from state stores at below market prices. A family of between one and four people is eligible for monthly purchases of 500 grams of rice, 500 grams of flour, 500 grams of cotton oil and the same amount of chicken legs, the website reported. “This, according to residents, is even worse than what was going on in the 1990s,” the website notes.

People may not have enough to eat, but they may take solace in the fact that Turkmenistan could soon have a new corvette on the Caspian Sea. Military buffs on Russian online forums claim to have discovered this by scouring fresh Google Earth images from March that they say show a warship is being built at a facility in the port city of Turkmenbashi. This nugget is then linked back to reports from August about the Turkmen navy reaching a deal with a Turkish shipyard for the supply of one of these coastal patrol boats.

The coronavirus story continues to trudge on as a lugubrious farce, with representatives of the United Nations and the World Health Organization again allowing themselves to be used as public relations cover.

On May 8, Foreign Minister Rashid Meredov told reporters that Turkmenistan was ready to admit a delegation of WHO experts into the country. “There are absolutely no problems here," he said. This is a patent lie, though, since the WHO has evidently been trying to get into Turkmenistan since at least April 23 without success.

Meanwhile, remarks delivered by Natalia German, the UN Secretary General’s envoy to Central Asia, to the Voice of the CIS, an online radio station, pleased Turkmen officials so much that they posted the interview in its entirety on the website of their Moscow mission.

“Timely measures adopted at the external borders of Turkmenistan undoubtedly enabled us to get to the situation we are now in,” German said in a comment that theoretically lends itself to multiple interpretations.

Paulina Karwowska, the head of the WHO office in Turkmenistan, appeared at first glance even more complimentary. RIA-Novosti cited Karwowska, who said she had visited quarantine facilities in the cities of Turkmenabat and Turkmenbashi, as hailing Turkmenistan for adopting necessary precautions and taking the problem seriously. But it is evident that Karwowska, as has happened to her colleague in Tajikistan, is letting herself get maneuvered into giving easily manipulated, exculpatory all-clear statements: "We rely on the health authorities of Turkmenistan to inform us of any confirmed cases, and until this time we have not been notified of any such cases," Karwowska said in remarks on May 3. Regime-friendly media take that kind of mealy-mouthed statement and run with it as an unqualified endorsement of Turkmenistan’s head-in-the-sand policies.

Translated into non-diplomatic language, however, Karwowska’s remarks suggest that she believes the Turkmen government may well be lying – almost certainly is lying – but that it would be rude to point this out.