Turkmenistan: Motherland of prosperity, or famine?

As ever in Turkmenistan, there is a yawning chasm between word and fact. 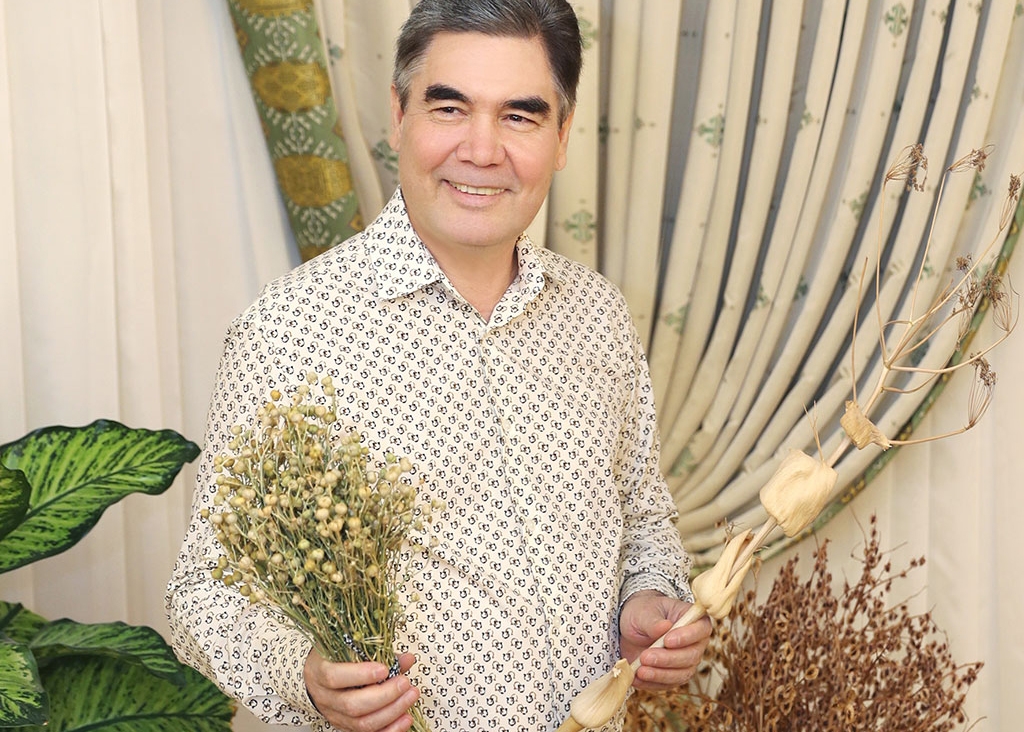 Gurbanguly Berdymukhamedov is on holiday, but this does not mean state media is letting up in its minute coverage of his activities.

On his first day away from work, he researched the next issue of his multivolume work on the medicinal plants of Turkmenistan. As seen in the July 15 evening news bulletin, he took a quick break to watch a TV recording of himself playing music with his grandson, Kerimguly.

With that done, he went to spend some time with a couple of his granddaughters. As the girls nervously stroked a trio of fluffy shorthair kittens, the president opined about importance of proper pet maintenance.

“By watching how children behave toward pets, you can determine their level of responsibility and how much they are able to care for others,” he is said to have explained.

That will feel like an unwittingly perceptive insight to anybody who recalls the 2017 images of Berdymukhamedov passing over the gift of an alabai puppy to Russian President Vladimir Putin as though he were handling a bag of potatoes.

As ever in Turkmenistan, there is a yawning chasm between word and fact. At the start of the month, the government was hoping in its typical fashion to generate some sense of buoyancy with a chirpy half-year economic growth figures report. That will have been soured, however, by another slide for the national currency.

The dollar is now reportedly trading for 18 manat on the black market, down from 16 to 17.6 manat earlier in the month. The official rate, meanwhile, remains fixed at 3.5 manat to the dollar – a spread that offers enormous opportunities for enrichment to members of the elite able to circumvent strict currency restrictions.

Then there was the deal reached for Turkmenistan to provide Russia with 5.5 billion cubic meters of gas annually until July 2024. The volumes are not huge, but some money is better than no money in these tight times.

TDH state news agency apparently reported on this development, but then quickly deleted the news from its website, as eagle-eyed writers at Vienna-based Chronicles of Turkmenistan spotted. In fact, the archived version of the state news article implied the deal would run to 2028, which might explain the embarrassing confusion.

This may have been a matter of faith over fact. Indeed, the authorities have of late adopted a noticeably warmer attitude toward Islam. At the end of June, the national broadcaster aired prayers to mark Berdymukhamedov’s 62nd birthday from a mosque in the city of Mary. (The mosque is named Gurbanguly hajji, in honor of the president’s pilgrimage to Mecca). This birthday has particular resonance as the Prophet Muhammad is said to have lived to the age of 62.

One possible interpretation for this newly discovered piety is that Turkmenistan is seeking to flatter oil-rich Middle Eastern partners in the hope they will part with some investment cash. On July 11, Alexander Dadayev, the head of the parastatal Union of Industrialists and Entrepreneurs, or UIET, played host to a Saudi business delegation in Ashgabat.

The point-man for Saudi investors appears to an individual called Bader bin Bahishan al-Busais, who has visited Turkmenistan a few times, but produced no agreements of note to date. His credentials look a little suspect. The potted biography on his own company’s website reveals that he got a PhD in comparative law from the American University of London, which the BBC has reported is a diplomas-for-money operation.

This fondness for Islam goes only so far. As The Diplomat noted, Turkmenistan was one of 37 countries that last week signed off on a letter to the UN Human Rights Council and the UN High Commissioner for Human Rights voicing support for China’s unabashed anti-Islamic policies in its Xinjiang province. Then again, Saudi Arabia was also a signatory to the same letter, so Ashgabat and Riyadh may be bonding over their shared barefaced hypocrisy.

Grain is plentiful, Berdymukhamedov announced last week, so that should be good news. If it is true that 1.65 million tons of grain were harvested in the first half of this year, it would go some way to relieving shortages seen at local stores. But as Netherlands-based Turkmen.news has reported, cynicism, skepticism and disillusionment are setting in. So much so that some have taken to mocking the official designation of 2019 as “Turkmenistan: Motherland of Prosperity,” and referring to it instead as “Turkmenistan: Motherland of Famine.”

As previously reported, long lines for ATMs (which often do not work) have become commonplace. The government boasted of its routine hike in salaries and pensions, but RFE/RL’s Turkmen service, Azatlyk, noted this that simply provoked a knock-on increase in the price of basic staples.

Turkmenistan has long coasted below the radar of international attention and the criticism that would bring. There are some isolated grumbles, however.

On July 10, Britain’s outgoing ambassador to Turkmenistan, Thorda Abbott-Watt, issued a statement expressing support for Turkmen journalists facing heavy-handed state repression. This was a muted expression of solidarity, but a significant one in a country where even the diplomatic corps are as a rule extremely reluctant to make even mild criticisms. If experience is anything to go by, Abbott-Watt may find herself being given the cold shoulder by Turkmen officials in her final days in the Ashgabat post.

Two days later, the London-based Foreign Policy Centre issued a scathing report about Turkmenistan, labelling it a Potemkin economy scourged by wanton human rights abuses. The report called on Western governments to halt institutional cooperation with Ashgabat. British Conservative member of parliament Nigel Mills even tacitly endorsed the call during a presentation of the report in parliament on July 15.

There is a fat chance any of this will have the slightest effect.

As Moscow-based news agency Prime reported on July 13, citing the Neutral Turkmenistan state newspaper, European Union officials are busy negotiating a framework agreement for the sale of Turkmen gas to Europe. As Lubomir Frebort, Brussels’ man in Ashgabat, was cited as saying, trade between the EU and Turkmenistan was a mere 700 million euros ($788 million) in 2018, so there is room for much more.