Turkmenistan: My kingdom for a horse

Berdymukhamedov talks up market economy and touts for investors. 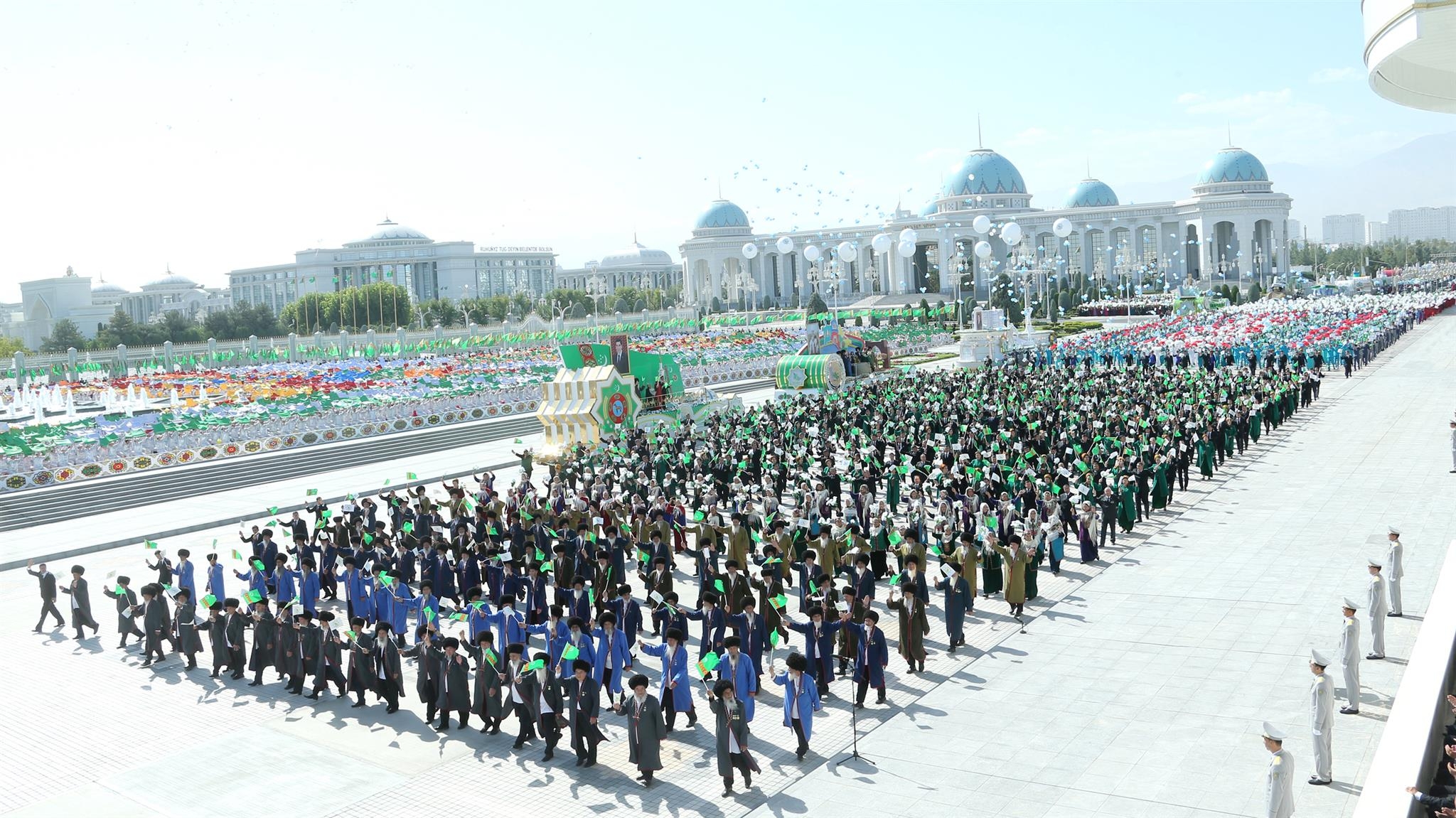 Celebration of the 27th anniversary of Turkmenistan's independence. (tdh.gov.tm)

In his speech delivered on September 26, he made no mention on why he had decided to summon the council, a gathering of community elders and public figures that he abolished in 2008. The institution had once fundamentally functioned to lend the rule of Berdymukhamedov’s eccentric predecessor, Saparmurat Niyazov, who died in December 2006, the flavor of popular support. By scrapping the body, Berdymukhamedov evidently intended to convey the impression he was embracing a more modern parliamentary model.

But that’s all in the past. Like Niyazov before him, Berdymukhamedov wants unvarnished and slavish adulation for his often dubious achievements. And so he bragged, for instance, that the flow of something he called “primary investments” had grown 350-fold since independence. Given the artificial quality of state statistics, not to speak of the chasm between the official and black-market exchange rates, any such boasting is essentially meaningless. Forging ahead, he claimed that 68 percent of those investments had come from the private sector – a figure hard to square with the state-dominated nature of Turkmenistan’s economy.

The feedback given by People’s Council members demonstrated how perfunctory the whole proceeding was. Footage relayed by RFE/RL's Current Time showed one speaker after another engaging in mortifying and self-abasing displays of lickspittling before the president. Berdymukhamedov appeared delighted and, sure enough, another edition of the Halk Maslahaty is now due to be held in Ashgabat next year.

Berdymukhamedov must expend more energy creating the impression of unfaltering public support as he forges ahead making unpopular decisions. On September 25, he abolished handouts of gas, electricity, water and table salt to Turkmen households. This austerity measure will take effect in January.

Berdymukhamedov had imposed limits on such handouts last year. He now says the total cutback is all part of his vision to usher in a market-rules economy. Not because the economy has been maladministered into the doldrums – not at all.

Glowing from his Halk Maslahaty experience, Berdymukhamedov jetted off for New York to deliver a speech before the UN General Assembly on September 29. It was the usual medley of bromides about peace and stability, with the requisite nod to Turkmenistan’s role as an energy exporter. Notably, however, he did make a plea for international support in developing the Caspian’s potential to become a logistical bridge linking continents. One such project could include a trans-Caspian pipeline plugging Turkmenistan into the Southern Gas Corridor that runs from Azerbaijan to Europe.

While in the United States, Berdymukhamedov did the rounds with representatives of various prominent companies. On September 30, he held a tête-à-tête with Bryan Lopp, director of international operations at Boeing. Discussions likely centered on Turkmenistan’s plans to buy three Boeing 737 MAX aircraft.

Berdymukhamedov also saw Markwart von Pentz, president of John Deere's Agriculture and Turf Equipment division. John Deere has long been active in the Turkmen market. In 2008, a Finnish documentary titled Shadow of the Holy Book revealed how a copy of the Rukhnama, a two-volume work of rambling history and cod spiritualism written by the late President Niyazov and made obligatory reading for all, came to be granted place of honor at the John Deere corporate visitor center in Moline, Illinois. It is not known if the tractor manufacturer has thought to acquire anything from Berdymukhamedov’s copious oeuvre.

Perhaps the most eye-catching meeting of all was one with multibillionaire Bill Koch. State news agency TDH said Koch, who is the brother of Charles and David Koch, the big-spending Republican Party donors, was interested in the "procurement of petroleum coke, carbamide and sulfur produced in Turkmenistan.”

Speaking of wealthy families, the exile-run Alternative News of Turkmenistan, or ANT, offered a staggering illustration this week of how lucrative being related to Berdymukhamedov can be. Ibabekir Bekdurdyev, the son-in-law of Berdymukhamedov’s sister, was this week bestowed by the president with the For the Love of the Fatherland state award. But that is just a bauble. Poring through his shameless displays on social media websites, ANT showed how Bekdurdyev has somehow contrived to build up a collection of garish watches worth more than $1 million.

While the gilded youth live in obscene luxury, others barely have homes at all. RFE/RL’s Turkmen service, Radio Azatlyk, reported September 29 on how authorities have demolished around 30 homes in the town of Gökdepe, which is outside the capital, to make way for a new road. Many residents have not received compensation – only promises they will get either new housing in one-and-a-half to two years or plots of agricultural land.

In this busiest of weeks, Turkmenistan even managed to cram in celebrations of independence day, on September 27. The holiday was last year brought forward by one month, from October, for reasons unknown. To mark the day, Berdymukhamedov attended a lavish military parade – TDH’s write-up of the proceedings noted the make and models of much of the military hardware on display.

It will not go unnoticed that the president preferred this horseplay to attending the Commonwealth of Independent States summit in Tajikistan on September 27-28. Deputy Prime Minister Purli Agamyradov was sent in Berdymukhamedov's place.