Legacy and death must linger perennially even in the minds of the most megalomaniacal autocrats, and this is why preparations for Turkmenistan’s future are proceeding apace. 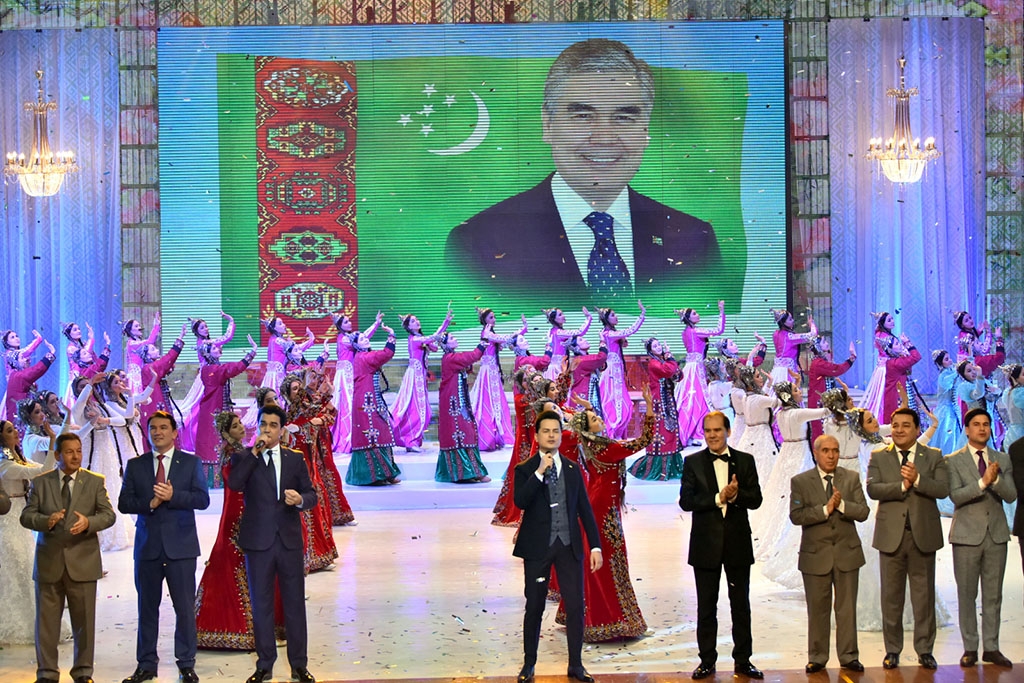 In the name of the Father and the Son. (state media)

Turkmenistan’s leader was given a sharp reminder of his mortality this week with the death of his 89-year-old father, Malikguly Berdymukhamedov.

In spite of the cult of personality being erected around his son, the older Berdymukhamedov enjoyed relatively limited exposure in life. The encomiums have been accordingly modest.

State media has nonetheless felt required to memorialize the late pater familias by endowing him with idealized qualities and describing him, for example, as an “unparalleled paragon of high humanism” and a man whose “life became a salutary example for the entire nation.”

Malikguly Berdymukhamedov started out as a librarian in a primary school in 1950, before going off to do his military service, which required stints in the Uzbek and Kyrgyz Soviet republics. He returned to education in 1956, only for his life to take a curious left turn in 1958, when he entered the Interior Ministry. He rose to the rank of lieutenant colonel before retiring at the age of 50. After that police service, he again returned to working in education.

The president’s personality cult has spilled over onto his father almost by default. So it was that parliament in February 2012 approved a decree naming a military unit based in Ashgabat after him. Legislators passed a similar resolution in November bestowing the name Malikguly Berdymukhamedov upon an Interior Ministry residential complex in a borough of the capital.

There was a neat symmetry in the news this week that the myth of the late leader, Saparmurat Niyazov, who died in December 2006, continues to fade. Amsterdam-based Turkmen.news on April 15 carried a photo of a discarded bust of Niyazov, whose cult of personality outmatched even that of Berdymukhamedov for outlandishness, lying in the courtyard of a government building in the Mary province. As Turkmen.news remarks, it is a sad ending for the legacy of a leader state media alternately referred to, among many other grandiloquent things, as the “eternally great leader of the Turkmen people” and the “viceroy of Allah upon earth.”

After Niyazov’s death, it was often – if wholly spuriously – rumored that President Gurbanguly Berdymukhamedov might even be the late leader’s illegitimate son. The similarity in appearance between Malikguly and Gurbanguly makes that fanciful notion all the more implausible, however.

Legacy and death must linger perennially even in the minds of the most megalomaniacal autocrats, and this is why preparations for Turkmenistan’s future are proceeding apace. That is happening specifically through the recent creation of a Senate, known as the Khalk Maslahaty, or People’s Council. An election of sorts was held to pick 48 members of the chamber’s 56 members in late March. (Another eight Senators are designated by presidential decree).

The only persisting mystery was who would chair this chamber. This is highly important because under Article 76 of the recently amended constitution, “if the President of Turkmenistan is, for one reason or another, unable to execute his duties, his powers will, until the election of a President, be transferred to the chairman of the Khalk Maslakhaty.” An election is supposed to be held within 60 days of that Khalk Maslakhaty chairman being slotted into place.

Berdymukhamedov thus was faced with a choice: Install a favored successor as Senate chairman or place a seat-warmer to fill the spot until a definitive personnel decision could be made. One oft-mentioned candidate for the former option was Berdymukhamedov’s son, Serdar, whose rapid ascent through the hierarchy has increased in tempo in recent weeks.

In the end, Berdymukhamedov sidestepped the dilemma by pursing a third route and simply having his loyal Senate install him as chairman. The fact that Berdymukhamedov was even elected to the Senate – with 100 percent of the vote, naturally – was irregular to begin with as it plainly violates a constitutional rule stipulating that the president cannot be a member of the legislature. But never mind about that.

This has all baked the potential for constitutional crisis into the cake, since it means there is no clear succession in the event of Berdymukhamedov becoming incapacitated. It also indicates a pathological lack of trust within the highest echelon of the elite. The president is apparently unwilling to favor any single individual ahead of a putative emergency succession scenario, since this could provide that person a strong incentive to plot against Berdymukhamedov.

The upshot is that all this has the decided air of an interim arrangement. The question is of how long that interim period is to last. Months? Years? Decades?

The succession conundrum has been resolved elsewhere, though. On April 16, TDH state news agency reported that Serdar Berdymukhamedov has taken over leadership of a symbolically important institution from his father: the Ashgabat-based International Association of Akhal-Teke Horse Breeding. (It is required to specify Ashgabat-based here since the Turkmen parastatal organization has historically been regarded with contempt by an eponymous body founded in Moscow in the mid-1990s).

Akhal-Teke are venerated with almost religious fervor in Turkmenistan and the state propaganda machine has relentlessly utilized the breed in its identity- and nation-engineering exercises. Viewed in this optic, Berdymukhamedov’s obsession with the horse is not a mere hobby, but a quasi-matter of state.

The breeding association was created in 2010 and has been led by President Berdymukhamedov ever since. Berdymukhamedov stated at the 11th annual meeting of the organization that time had finally arrived for the election of “another worthy leader.” Berdymukhamedov junior was elected unanimously, setting what may become a familiar precedent.

Quite what makes Serdar Berdymukhamedov such a worthy head for a horse-breeding association is anybody’s guess. He is not especially known for his fondness for the animal and does not, unlike his father, pose regularly for TV images while horse-riding. It is even rumored in exile circles that he is actually afraid of horses and unable to ride them, although this may be a crude, emasculatory attempt to undermine his standing among his countryfolk.

Serdar’s animal passions are instead focused on dogs – namely, the Alabai sheepdog. A canine analogue of the Akhal-Teke association, a national Alabai dog association, was created in May 2020 with Berdymukhamedov junior at the helm. A week-long national holiday devoted to the breed, approved in February, is taking place this very week and will run until April 25.

In the future, belief in dog may become mandatory.