The dauphin becomes president. This and more in our weekly briefing. 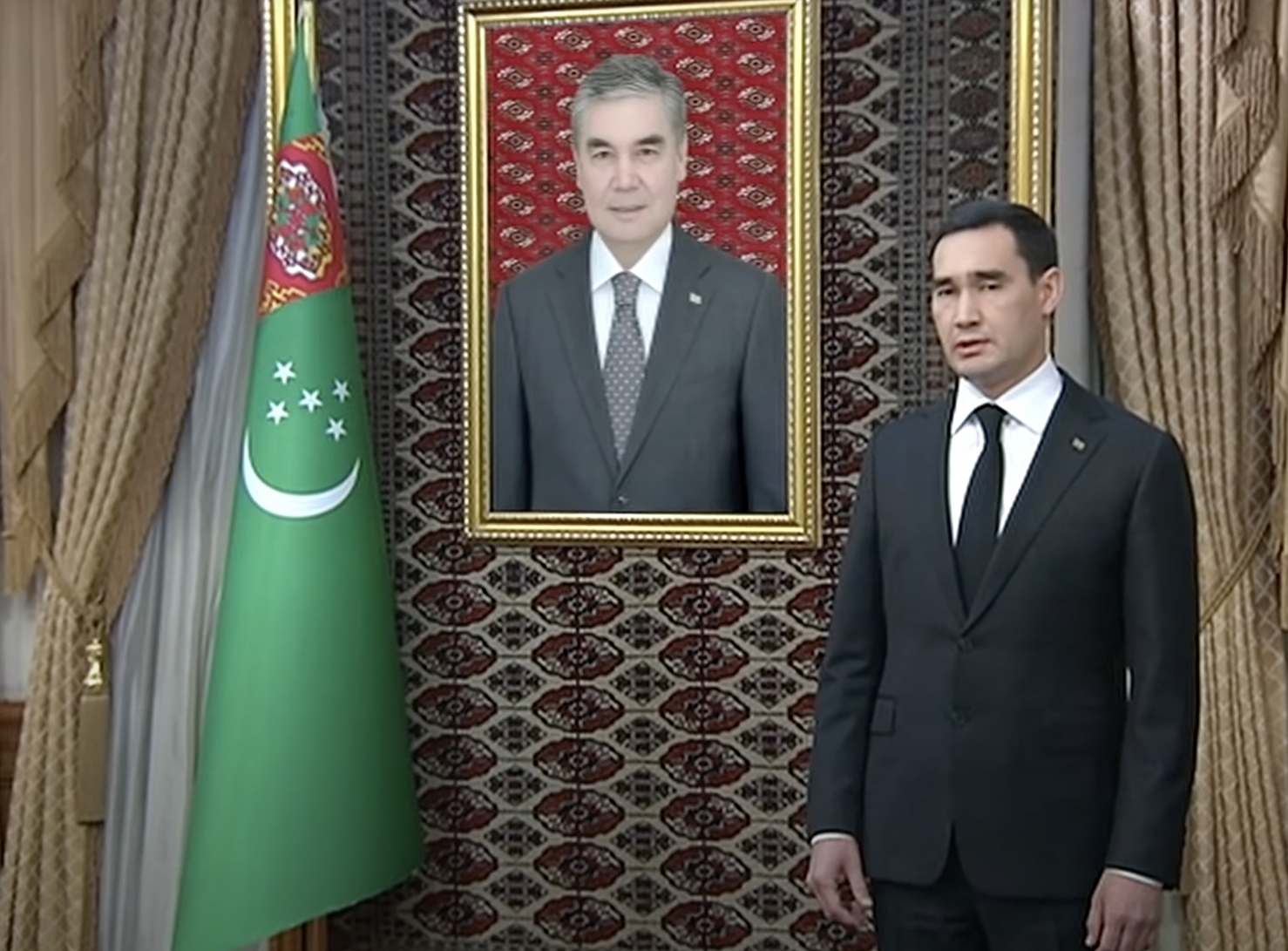 The choreographed handover of power is almost complete in Turkmenistan.

Vote officials issued a statement on March 15, three days after the presidential election took place, to announce that Serdar Berdymukhamedov, the 40-year-old son of the outgoing leader, won 72.97 percent of the ballots cast.

The election has been a profoundly perfunctory and subdued affair. No stark change of direction is in the cards, unless Berdymukhamedov the younger turns out to have heretofore unseen qualities.

The victory, although crushing, was not quite on the order one is used to in totalitarian states like Turkmenistan. Serdar’s father, Gurbanguly, garnered more than 97 percent of the votes cast in the 2012 and 2017 elections. He only got a relatively modest 89 percent in his first run at the presidency, in 2007. That is still more than his son, however. The intention here is evidently for Serdar not to eclipse Gurbanguly, who will continue to retain a role in the ruling apparatus, most notably in his position as chair of the Senate.

The best performer among the eight runners-up, with 11 percent of the votes cast, was Hydyr Nunnayev, the vice rector of the Turkmen State Institute of Physical Culture and Sports, who was nominated by an Ashgabat-based “initiative group.” Having completed his task, he will return to obscurity.

There was some theater on election day, all of it designed to underline the imminent winning candidate’s modesty. Serdar turned up to the polling station with his wife and three daughters in a white Lada that state television noted had been given to his grandfather, an Interior Ministry lifer, for his impeccable service. (Serdar’s son, Kerimguly, was absent, reportedly because he is studying in the United Kingdom).

After casting his ballot, Serdar went through the motions of taking questions from reporters in what looked like a coordinated simulation of a press conference. For all its fakeness, the show was unusual for Turkmenistan, because Berdymukhamedov the elder almost never takes part in press opportunities, even fake ones.

The questions came in Russian, English, and Turkmen, in that order. Serdar answered each question in those respective languages, just to remind the audience of his linguistic abilities.

The reporter from Russia’s state-run TASS news agency posed a question about the direction of Turkmen foreign policy under Berdymukhamedov the younger. Serdar offered a response that was both canned and well-worn but also evidently crafted with the unfolding situation in Ukraine in mind.

“The neutral status of Turkmenistan allows it to develop full-fledged relations with all states, both in this region and beyond it,” he said, speaking in Russian, the language of the country that has just invaded a neighbor with the specific aim of coercing it into ersatz neutrality.

Berdymukhamedov indicated that his foreign policy vision would be in line with the five-point agenda that had been decided at a joint session of the houses of the legislature on September 11. Those objectives are, he said, ensuring security and stability, upholding the country’s neutral status, diversifying foreign economic relations, promoting stable development, and “humanizing international relations.”

This language is impossibly vaporous and unspecific, but at least some of it can be read as informing Turkmenistan’s posture over the future of Afghanistan.

On the day of the election, the TDH state news agency reported that Berdymukhamedov the elder had given the green light for Turkmenistan’s state power generator to supply its Afghan analog, Da Afghanistan Breshna Sherkat, or DABS, with electricity transmission management equipment at the Nur-el-Jahad power plant in the Herat province. This transfer of technology, the report stated, would help with implementation of the trans-Afghan TAP high-voltage power transmission line project. No costs were mentioned.

This sort of thing, helping a struggling and unstable neighboring country in the interests of advancing a project that should, in theory, one day provide returns to Turkmen state coffers, ticks several of the five boxes that Berdymukhamedov talked about in his response to the TASS reporter.

There was news this week from Kabul about the other important trans-Afghan energy project too as the Taliban government declared that it was intent on resuming work on the construction of the TAPI gas pipeline even without input from the Asian Development Bank.

“The project is mainly owned by Turkmenistan and the ADB was … playing a role as a financial advisor,” Ahmad Wali Haqmal, a spokesman for the Taliban-run Finance Ministry, was quoted as saying by TOLO News.

This is accurate inasmuch at the consortium in charge of implementing the project, the TAPI Pipeline Company, is 85 percent owned by Ashgabat’s state-owned Turkmengaz. Three remaining stakes of 5 percent are held by the Afghan Gas Enterprise, Pakistan’s Inter State Gas Systems, and India’s GAIL, respectively. But Turkmenistan has never even hinted at any willingness to foot the estimated $10 billion or so bill for turning TAPI into a reality.

Returning to election day, a reporter from Turkish public broadcaster TRT-World asked in English, in a question that was almost certainly provided to her by Turkmen Foreign Ministry officials, what Serdar intended to do to develop the private sector. His response concisely reprised his father’s vision for how Turkmenistan intends to transition to market rules. Namely, through targeting lending to an entrepreneurial class represented quite heavily, one can only imagine, by relatives of the ruling family, cronies, and flatterers.

“Today our country successfully implements the state program for supporting the national private sector,” he said. “And also, our government provides financial assistance, public infrastructure and facilities for the private sector.”

The fact that Berdymukhamedov chose to expand on this question in English implies that he hopes to convey an air of internationalism and openness to the world. It is a nice attempt, although it will take a little more than that to attract serious foreign investors.

The government’s fantasies about the prospects of the country’s tourism sector are a neat illustration of the kind of willful delusions that Turkmen officials are content to entertain. The TDH state news agency on March 11 reported on a government-organized video conference devoted to how Turkmenistan is supposedly “increasing its potential in the field of foreign tourism from year to year.” Given that the country has – as the result of arbitrary and denialist policies designed ostensibly to prevent the spread of COVID-19 – been almost entirely sealed off from the world for the past two years, the whole discussion as reported had a markedly Through the Looking-Glass air about it. This is unfortunate since Turkmen officials are entirely justified in boasting of their country’s extreme attractiveness; it is just that almost nobody can get in.

Vienna-based Chronicles of Turkmenistan has been zealously, albeit slightly pointlessly, given that the whole presidential election is anyway a crude parody of democracy, kvetching about the procedural violations. In a report published on the eve of the vote, the website noted that it was legally absurd that Gurbanguly Berdymukhamedov should have triggered the snap elections by stepping down, but still continued to serve as acting head of state. In any case, in the event of early elections, a period of 60 days is supposed to elapse between the outgoing leader stepping aside and the vote taking place. The interval in this case was just one month, and the registration of candidates only ended on February 22, a mere 18 days before the polls.

No matter. Serdar Berdymukhamedov is the new president.