Turkmenistan: No COVID, no worries 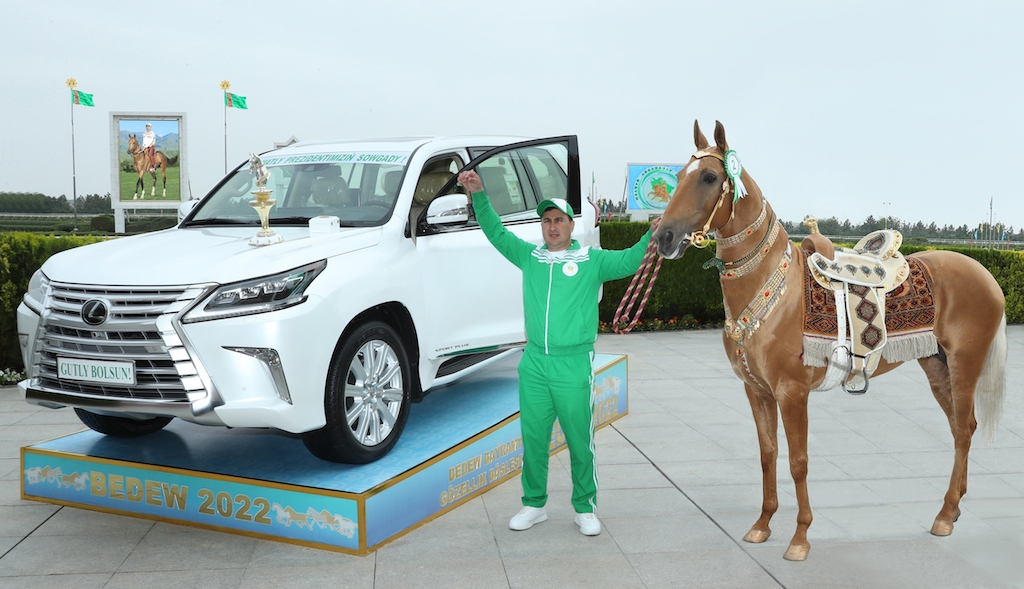 Melebash, right, the palomino stallion that won this week's horse beauty contest, with his trainer, Begli Jurayev. To the left is the Lexus SUV that they won. (Photo: Turkmenistan government website)

Having decided that they are relatively out of danger from the threat of a major fresh COVID-19 outbreak, the authorities are easing restrictions.

As Ashgabat-based outlet Turkmenportal has reported, cinemas and concert halls in the capital will be permitted to admit customers from May 1. Safety protocols will still need to be respected, which implies mask-wearing and maintaining social distancing, so full houses are not in the cards.

Amsterdam-based website Turkmen.news on April 22 pointed to a far broader loosening, as decided upon at the government commission on the fight against the spread of disease that convened on April 20.

Numerous shopping centers, most of them in Ashgabat, will by now have reopened. From May 1, dozens of banquet halls and restaurants will resume admitting guests and diners.

Turkmen.news usefully also reminds the readers that these are not mom-and-pop businesses that are being allowed to do business once more. All these catering businesses are owned by government-controlled entities like the Trade Ministry, the Interior Ministry and the parastatal Union of Industrialists and Entrepreneurs.

In the era of oft-declared fiscal austerity – a fact that the former president, the father of the incumbent, used to frame as a necessary part of the transition to market rules – it is particularly important that government bodies be able to get these money-makers up and going again.

But does any of this mean that the danger of COVID-19 is over?

The Turkmen government, of course, has notoriously denied ever having recorded a single case of the coronavirus. It has been loyally abetted in this absurd lie by the World Health Organization, which reproduces official data as fact on its own website. Even some international financial institutions have taken to adding an asterisk linking to a line of caveat when data are either incomplete or dubious. As far as is public knowledge, Turkmenistan has failed even in the simple task of submitting test samples to international references labs for confirmatory testing, but this too is something that the WHO omits to mention.

That exercise is theoretically redundant anyhow now since Turkmenistan has testing capacity of its own.

Earlier this month, the local office of the United Nations Development Program, or UNDP, announced it had delivered a batch of almost 200,000 PCR-based test kits as part of a $20 million initiative funded by the World Bank. In March, the UNDP had delivered lab equipment with which to do the testing. There is probably little sense in wondering why gas-rich Turkmenistan, which has only just grandly inaugurated a new hospital apparently brimming with expensive Western-produced medical equipment, needed the World Bank to pay for all this kit, and only this late in the day.

Another unverifiable claim that the WHO passes on is that Turkmenistan has, as of March 6, administered 7,140,000 doses of COVID vaccine. This should be encouraging, although since most of the vaccines are from China, which is now being spooked by a resurgence of cases, the strength of this defensive line feels less than certain.

Even though travel restrictions are still severe, important guests continued to flit in and out.

On April 24, the familiar figure of Rustam Minnikhanov, the president of Russia’s republic of Tatarstan, traveled to Ashgabat to check in on the investment prospects of companies from his region. Tatarstan’s business community is represented most significantly in Turkmenistan by the Kamaz truckmaker, oil company Tatneft, and engineering services company KER-Holding. Kamaz has over the years sold 2,000 vehicles to Turkmenistan, Minnikhanov’s office says.

Trade turnover figures are still meager, though, and with Russia’s options now dramatically reduced on account of international sanctions, the likes of Turkmenistan will be getting much more attention.

“Last year, our trade turnover amounted to $77.5 million. There is considerable potential to increase these numbers, in particular in such areas as oil exploration, oil production, gas transportation, cars, aircraft, shipbuilding, and in the supply of chemical products,” Minnikhanov told his host, President Serdar Berdymukhamedov.

Dealings with neighboring Uzbekistan are much more important and substantial, but there has been some disappointing news on that front. Figures produced by the Uzbek State Statistics Committee revealed that bilateral trade had decreased by 17 percent in the first quarter of 2022 as compared to the same period the year before. Over those three months, Uzbekistan imported Turkmen goods worth a total of $154.8 million, while Uzbekistan exported $32 million worth of goods to Turkmenistan.

Back in January, when he was still only a mere deputy prime minister, Serdar Berdymukhamedov traveled to Uzbekistan with grand talk of creating a free trade zone on the border to serve as the cornerstone for a new resurgence in commercial exchanges. At the same time, business community representatives from both countries met in Tashkent and signed several deals. Officials from both nations will hope these dispiriting first-quarter figures were only an unfortunate blip.

In some other regional trading news, Berdymukhamedov greenlit a deal for the Industry Ministry to buy 10,000 tons of aluminum products from Tajikistan’s TALCO. This was being done, the government website stated on April 22, to “create innovative industrial processing capacity” and supply the market with “import-substituting goods.” The financial terms of the deal were not revealed.

Turkmenistan didn’t only have Russian suitors visiting. Berdymukhamedov met on April 24 with the heads of two major Ukrainian industrial concerns involved in the construction of civil infrastructure, Altcom and Interbudmontazh. Both companies have completed major commissions in Turkmenistan before – namely, a railway and road bridge across the Amu Darya (Altcom) and an engineering and communication tunnel beneath Ashgabat (Interbudmontazh) – and may well be looking for more work.

Minnikhanov and the Ukrainians were ostensibly in town to attend festivities to mark the National Day of the Turkmen Horse, the Akhal-Teke. The event proceeded with a now-familiar routine of races and various pageantry. 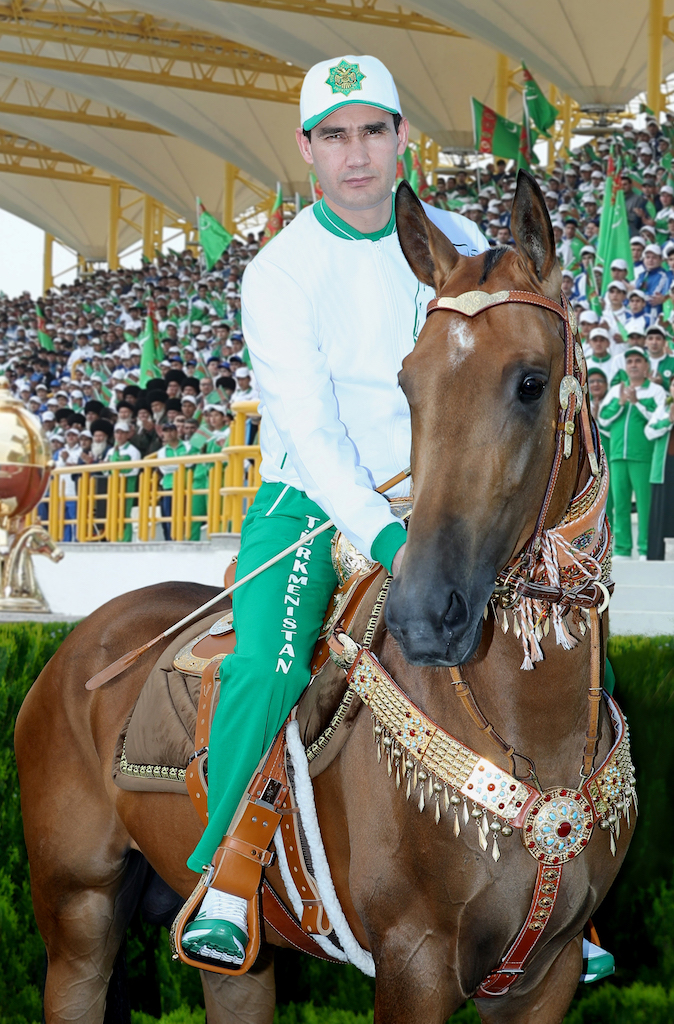 This President Berdymukhamedov is not quite as obviously enamored of horses as the former president, his father Gurbanguly Berdymukhamedov, but he nevertheless gamely took a ride for the crowd during a horse beauty contest on the eve of the national holiday. The winner of that beauty contest, for anybody taking note, was a palomino stallion called Melebash belonging to the president's own stables. The animal’s trainer, Begli Jurayev, was rewarded for this feat with the prize of a Lexus SUV.

A mildly overhauled version of the Criminal Code was published in the Neutral Turkmenistan daily on April 22. One new provision to come into effect in 2023 is that it will become an offense to shine laser pointers at aircraft. Perpetrators could get up to two years in prison. The older Criminal Code envisioned penalties for anybody dismissing or refusing employment to pregnant women without legitimate grounds, but that rule has now been extended to protect women with children under three years of age too.

Turkmen.news notes that same-sex relations between men remain an offense punishable by up to two years in prison. The maximum sentence for violent sodomy has gone up from six to eight years, however. Meanwhile, sentencing guidelines have been broadened from people found guilty of engaging in sexual intercourse with individuals under the age of sixteen. They can still be sentenced with up to three years in prison, but other milder punishment, like fines or two years of corrective labor, are envisioned too.