Turkmenistan: No money, no problems

What ordinary Turkmens have long understood is that in times of trouble, they are by and large on their own. 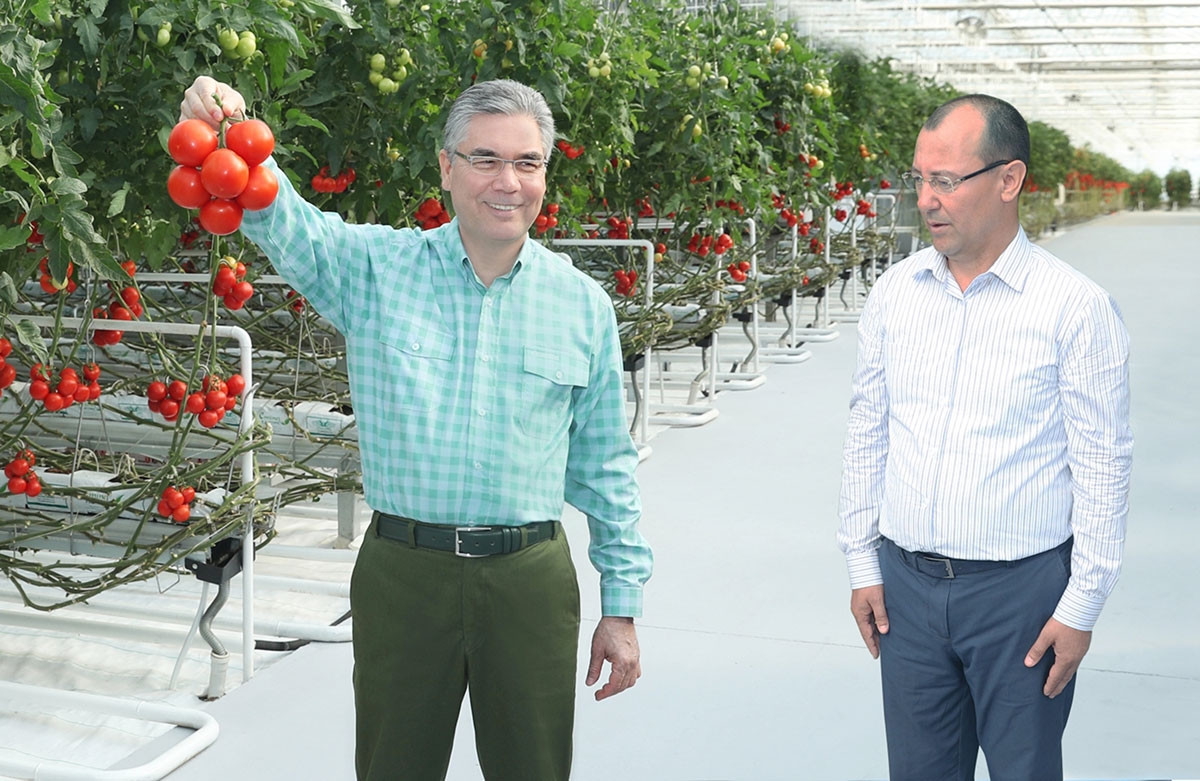 You can look, but don’t touch. (state media)

Every new year in Turkmenistan is ushered in with a motto. In 2021, it is “Turkmenistan: Land of Peace and Trust.”

For good measure, the government held a conference on January 4 to explain to lawmakers, officials and local media what that slogan is meant to signify. This year will be devoted, speakers at the event said, to “popularizing the achievements of the fatherland,” pressing onward with sweeping economic reforms and maintaining stability.

Some of the government’s achievements in 2020 include trying to cover up a significant COVID-19 outbreak, enabling continued food shortages, and ignoring a natural disaster that left countless people homeless. But that may not be the sort of thing they were thinking about.

Indeed, while acknowledging that this has been a tough year for the country, officials persist in trotting out rosy data that will reliably be taken as gospel by the likes of the International Monetary Fund. Moscow-based website CentralAsia.news cited data showing that gross domestic product had grown by 5.8 percent in the first 11 months of 2020. Retail trade, it said, had expanded by 18 percent. The website also reported, albeit without indicating the source of its information, that the export of natural gas and petrochemical products had generated $4.1 billion in revenues.

In an explainer of sorts, Ashgabat-based news website Orient, attributed growth at a time of pandemic to the opening in 2018 of three important industrial facilities: the Kiyanly petrochemical plant, the Garabogaz ammonia fertilizer plant, and a combined-cycle power plant in the Mary province. These are nearing peak output and are thereby boosting the volume of exports, the website surmised.

Determining the reliability of upbeat accounts about how those enterprises are faring is all but impossible. Oil trading is slightly less opaque. Ashgabat-based website Arzuw reported on January 4 on how Azerbaijan’s Socar Trading, a marketing subsidiary of the Baku-based state-owned oil and gas company, will take delivery of 2 million tons of oil from Turkmenistan over the coming two years. That oil is being sourced from Petronas and Eni, which are both developing projects in Turkmenistan, and will be fed into the westward-bound Baku-Tbilisi-Ceyhan pipeline.

The narrative on the food front is scrambled too. While shoppers reliant on state stores are compelled to wait in lines for hours to buy basic staples like cooking oil, flour and sugar, state-aligned media boasts of bounties.

Orient news website cited the State Statistics Committee as saying that the production of “basic varieties of crops” had increased by the very round figure of 10 percent year-on-year in the period from January to November 2020.

Certain growers are apparently even training their eye on the export market. The Turkmen government website quoted one agro-entrepreneur in the western city of Balkanabat as saying that he has sent 50 tons of his 64-ton yield of greenhouse-grown tomatoes to buyers in Russia.

The goal of reorienting crop growth to smaller farmsteads is a recurrent theme. One item on the government website on January 3 noted how the “number of people wishing to do horticulture is growing every year.” For example, in the Dashoguz district of Gurbansoltan Eje, the website says, 1,550 hectares have been given out on long-term leases to 299 residents for growing fruit and vegetables. Even that report cannot quite bring itself to omit the catch, however. Cultivating that arid land, notwithstanding purported reclamation efforts, is hardscrabble business. Doling out plots of dry soil to hard-up rural folk is part of a longer-term strategy to inculcate self-reliance – what the government euphemistically describes as the transition to market economics.

What ordinary Turkmens have long understood is that in times of trouble, they are by and large on their own.

RFE/RL’s Turkmen service, Radio Azatlyk, reported on January 4 on a new, mysterious die-off of cattle in the Lebap province. Of the cows infected by this strange illness, whose symptoms include the appearance of sores on the animal’s mouth, an average 30 percent die. State veterinarians are reportedly of little use, although some suggest rustling up a brew made with yuzarlik (Peganum harmala), the desert herb that President Gurbanguly Berdymukhamedov has suggested could be used to ward off COVID-19.

Livestock breeders cited by Azatlyk put the regular outbreak of infections among their animals down to the state’s failure to allocate funds for vaccinations over the past three years. Veterinary services are also woefully underfunded, leaving farmers to pick up the bill.

It is probably naïve of farmers to imagine cows could get medical attention when even human beings struggle to get basic modern treatments. Neutral Turkmenistan newspaper crowed in its January 2 edition about how the Saglyk state program has for 25 years been “increasing the efficiency, accessibility and quality of preventative medical services.” This is a nonsensical brag at the best of times, but for it to appear in a lengthy article singing the praises of licorice roots is particularly grievous.

Licorice has become the curative plant of the day, ever since Berdymukhamedov strongly hinted at a December 25 Cabinet meeting that it could be used to treat the symptoms of coronavirus. He alluded only to its potential to mitigate unspecified coughs and respiratory diseases, however, since the government refuses to admit it has recorded any cases of COVID-19.

And despite being coronavirus-free, Turkmenistan has yet again extended its suspension of train services, this time until February 1.

Contact among members of the public will be reduced by means of another expedient, although this one has not been occasioned by the COVID-19 situation. Azatlyk reported on December 30 that a large quantity of ATM machines are being dismantled across the regions. In the Lebap province, ATMs have halved in number in recent months. The reported reason is cash shortages. Large and often testy lines form in front of the cash machines, so authorities have adopted the radical solution of simply removing them altogether.

The cardholder-to-ATM machine ratio was already poor. Even as the number of bank cards in circulation rises, to about 4.3 million at last count, the number of cash machines keeps falling. As things stand, there is one machine for every 2,000 cardholders.

The intent is evidently to stamp out the informal economy, which remains strong despite the state’s omnipresence. Forcing people to use their cards to make payments should in the long-term drive people from the bazaars into modern stores. Never mind that payment terminals often do not work and that it is at markets where bargains are to be found.

The trust aspect of the 2021 motto is not being extended to people’s use of the internet.

In its report on how authorities clamped down on people trying to celebrate the arrival of the new year, Azatlyk reported on the fact that the functioning of VPN services have become patchier, indicating that the authorities are improving their ability to enforce censorship.