Turkmenistan: O debt, where is thy sting?

The president makes an unprecedented admission: Turkmenistan is deep in the red. 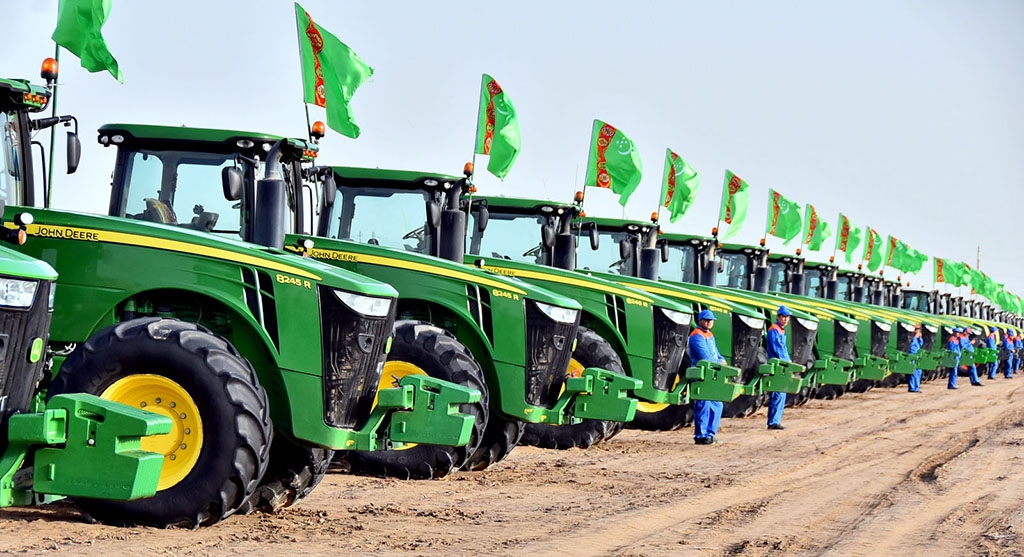 Turkmenistan's debt quandary: Farmers who are unable to feed a cash-strapped population are supposed to be paying off large dollar debts. (government handout)

Watchers of Central Asian affairs are used to hearing about the teetering piles of debt weighing down Kyrgyzstan and Tajikistan.

Despite sitting on colossal energy reserves, Turkmenistan is no stranger to such worries.

President Gurbanguly Berdymukhamedov went public with his concerns in a March 11 cabinet meeting, although he was characteristically stingy with data.

He did give some sense of how much Turkmenistan borrows, however.

More than $8.8 billion in debt has been raised “in recent years” – no firmer timeframe was offered – to develop the fuel and energy sectors. The priority, said Berdymukhamedov, was to boost the profitability of natural gas by converting it into byproducts.

Perhaps the most notable such initiative was the $1.7 billion gas-to-liquids plant that opened in June 2019. Turkmengaz gas monopoly chairman Batyr Amanov said he expects the foreign debts owed by his company to be paid down soon with funds raised through sales of that plant’s product.

Each official who stood up to report to the president made similar, vague pledges about paying down debt.

Berdymukhamedov spoke as though feasibility was a novel concept. When raising foreign capital to pay for building new energy industry facilities, he said, detailed feasibility studies should be conducted. Projects should be financially self-sustainable, he explained.

What of other sectors? Around $2.7 billion worth of foreign credit has been raised to develop what was described loosely as the construction and industrial complex. Again, no details were provided, but a sizable chunk of that would be things like the $500 million loan that the Asian Development Bank approved in 2018 to help Turkmenistan improve its power transmission network.

Another $1 billion of credit has been extended for the transportation and communications sectors. A key project here was the north-south railway running from Uzen in western Kazakhstan to Gorgan in Iran, via the Turkmen node of Bereket. The ADB stepped in there too, lending $125 million. As the state news agency noted, though, only 67.8 percent of the transportation and communications credit has been spent, meaning that almost one-third of those funds are not even yielding any revenue with which to manage debt.

When is all this money due? That information is not included in the written news bulletins, but some highly useful figures were flashed up on the screen for two seconds during the March 11 evening news bulletin. 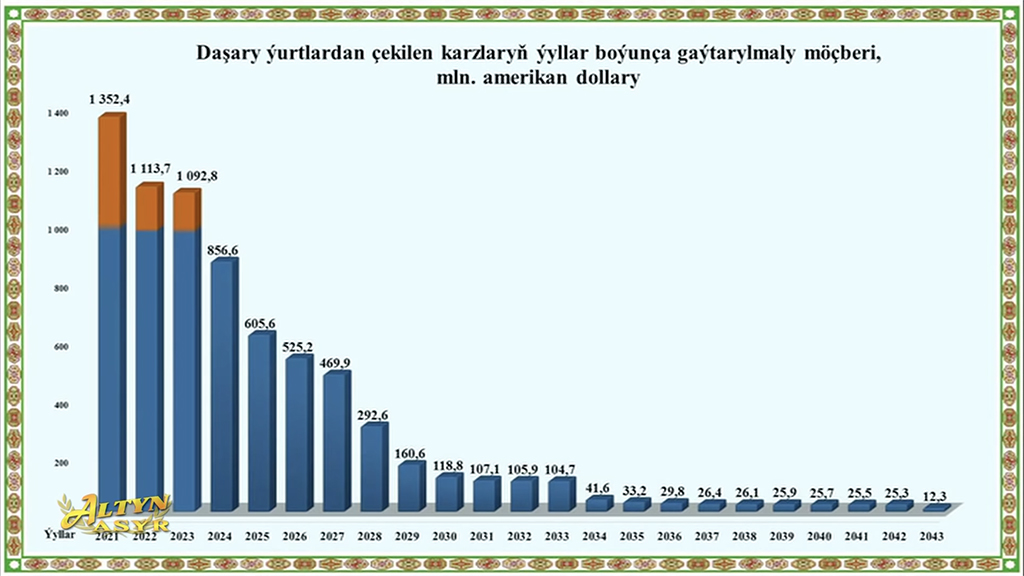 Eagle-eyed viewers will know, courtesy of another fleeting graphic, that the lion’s share of 2021 liabilities – $895 million – are owed by the fuel and energy complex. It is probably safe to surmise that since China has lent Turkmenistan billions in that area, these dues are being paid off in the form of gas deliveries.

At least gas is an easily monetized commodity.

The agriculture sector is trickier. Of the outstanding $608 million in liabilities there, $145 million must be repaid by the end of 2021.

The president said that the burden will fall on the heads of the agro-industrial complex, rather than the central government itself.

Berdymukhamedov’s lackeys routinely pour statistical honey into his ears about the massive strides forward being made in farming. Like when the State Statistics Agency reported that farms in Turkmenistan had increased the volume of mechanized work in crop production by 62 percent in January-September last year. Bulletins flowing back up the chain duly attest to alleged growths in output. If history is any guide, though, those boasts are almost certainly utterly bogus.

It was only last month that Berdymukhamedov was tearing strips off the deputy prime minister with the portfolio for agriculture, Esenmyrad Orazgeldiyev, for failing to implement reforms and execute the digitization agenda. He was no less annoyed with Orazgeldiyev on March 5, when he complained that huge investments on farming equipment and inputs had not led to self-sufficiency.

How is an agro-industrial sector unable to feed a cash-strapped population supposed to be paying off large dollar debts?

Berdymukhamedov returned to the theme of food and harvests at a March 15 government meeting. He instructed, in the manner of somebody shutting the door of a freshly vacated stable, that efforts be undertaken to “minimize the negative effects” of the recent frosty weather on fruit-yielding trees. He did not mention other crops, but signs are not encouraging.

Back in February, weather-focused Russian website Meteozhurnal mused darkly on how Turkmenistan had taken a major risk by sowing potatoes in the early part of that month. In line with the forecasters’ predictions, temperatures in parts of Turkmenistan dropped well below freezing for a few days in late February, which can have done the fledgling potato plants no good. Sub-freezing conditions returned once again on March 13-14.

More strong-arming will be required to remedy problems.

Amsterdam-based outlet Turkmen.news reported on March 15 that managers at state-owned enterprises in the Balkan province are forcing staff to contribute part of their salaries to buying potato seeds.

As the same article points out, potato-growing has become a big priority for the government. Two-thirds of the 34,000 tons of potatoes that Turkmenistan bought from Russia in 2020 were seed potatoes, which are used essentially as starter material for cultivating a new generation of crops.

Berdymukhamedov’s son, Serdar, also known as the deputy prime minister for digitization, has made his own contribution to the food sector agenda. On March 12, he reported to his father on work done so far on building a national network of greenhouses. The greenhouses under construction will collectively cover an area of 350,000 square meters (86 acres) and should be able to produce 8,750 tons of fruit and vegetables annually.

Berdymukhamedov is apparently so pleased by all this that he has ordered the facilities be inaugurated with a display of pomp during festivities to mark Turkmenistan’s 30th anniversary of independence.