Turkmenistan: Out at sea

With the Taliban at the border, the president heads in the other direction to oversee defense operations on the Caspian Sea. Our weekly Turkmenistan briefing. 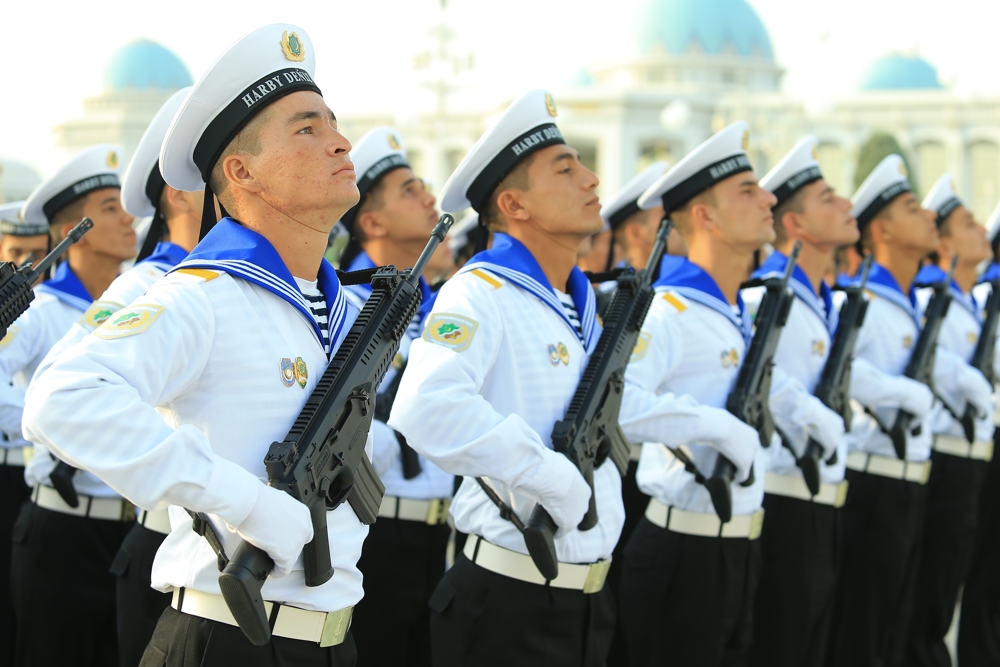 Despite all the action at the moment being on Turkmenistan’s eastern border, in Afghanistan, the president ventured last week to the west, to open a new defensive outpost on the shores of the Caspian Sea.

Proceedings unfolded with the usual fanfare, and Berdymukhamedov as usual arrived in his military fatigues. A row of 60 or so sailors stood to attention behind a cutout of a ship listening to the president’s speech and roared war cries of approval.

The Turkmen state news agency offered the usual effusive language about how the naval unit will be equipped with the “latest technology,” enabling it to track passenger and military vessels in the Caspian Sea.

The idea of Turkmenistan upgrading its maritime defenses emerged in quite different times – back in the late 2000s, when the country was still at loggerheads with trans-Caspian neighbor Azerbaijan over disputed subsea energy reserves. With bonhomie having broken out between the countries, however, this military outpost has acquired more of a prestige quality, a reflection of Turkmenistan’s aspiration to be treated as an equal peer among its four fellow Caspian nations, which also include Iran, Kazakhstan and Russia.

The Deniz Khan is likewise intended to show off the country’s industrial capabilities, although as is often the case in Turkmenistan for technically complex projects, the actual work was done by foreigners. The craft was built by a joint venture between two Turkish companies, the Gulhan and Dearsan shipyards. For the curious, industry website Naval News carried highly detailed technical specifications on the corvette in its report on the commissioning.

While Turkmenistan may be bolstering its defenses by sea, it is still doing miserably in protecting its citizens by air. From respiratory diseases, that is.

As Amsterdam-based Turkmen.news reported on August 17, the COVID-19 outbreak, which authorities refuse to even acknowledge, is getting worse. By way of evidence, the website cites its sources as noting that multiple hospitals in the Lebap province are at full capacity.

In the Sayat district of Lebap, community elders, clerics, and heads of local government are barred from attending funerals and other events in neighboring settlements and are being ordered to enforce the same rule upon the rest of the population. Turkmen.news has collated similar stories of outbreaks and restrictions on movement from all over the country.

There is also evidence that anti-vaccination sentiment may be playing its part. RFE/RL’s Turkmen service, Radio Azatlyk, reported on August 9 that people in the Lebap province are being fined if they decline the jab. They are then forcibly jabbed anyway. Azatlyk says that with the over-75s having now been vaccinated, the program has been rolled out to the rest of the population, where it has met some resistance. Turkmenistan is the only country in the world to date to have made vaccination legally mandatory.

There are no reliable figures about how many doses are even available to Turkmen. Two Russian vaccines – Sputnik and EpiVacCorona, which has been developed by drug-maker Vector – were registered early on with little ceremony. In terms of volume, however, it seems the most readily available vaccines are ones made in China, although none have been registered.

Detection capability is notionally getting better, although this seems like a trifling distinction anyhow since the government’s instinct is to cover up. The World Health Organization on August 13 said it last month delivered new COVID-19 testing equipment.

“Among the new equipment, COVID-19 virus detection kits and two Rotor-Gene devices, used for COVID-19 testing, will be installed in the [Health] Ministry’s regional laboratories, where polymerase chain reaction (PCR) tests are routinely carried out,” the WHO said, readily taking the assurances of their Turkmen partners at face value.

The WHO is in trademark pusillanimous fashion playing along with the Turkmen fiction by stating that “these efforts are aimed at … helping reduce the risks and potential impacts that COVID-19 could have for the country’s citizens,” as though the coronavirus has not torn through the population already.

Another regional crisis officials are intent on ignoring is the drought. Azatlyk reported on August 14 that western Turkmenistan is seeing scenes like those to the north in Kazakhstan as thousands of heads of livestock perish for lack of food and water.

To add insult to the injury of water shortages, the authorities chose this moment to inaugurate a new reservoir in the Bereket district of the afflicted Balkan region. The reservoir, which was commissioned with the usual singing and dancing on August 11, has been sold as a way to rationalize water use by redirecting flow from the Karakum Canal to fields in the west.

But Azatlyk’s sources said that for the reservoir to look nice and full for the television pictures, water had to be directed away from nearby fields. The same specialist cited was in any event caustic about the prospects of the reservoir, noting that the facility currently lacks the pumps needed to get water to villages.

Water woes have been felt a little further northeast too, in the Dashoguz province. Vienna-based Chronicles of Turkmenistan reported on August 16 that villagers across multiple districts have had their thirsty rice crops destroyed on the orders of agricultural association chiefs. Villagers acknowledge that they were growing the crops without permission, Chronicles said, but that they were compelled to do so for lack of other sources of income.

Talk of water rationalization is mostly bunkum though. The government continues to insist on preserving and even super-charging the cotton industry, which yields only misery for the farmer and the people forced to work in the fields against their will. This year, Berdymukhamedov has demanded that the wholly unrealistic planned 1.25 million-ton cotton harvest be submitted by late September, in time for Independence Day, instead of the usual late October-early November deadline.

Buoyant figures on hydrocarbon production are likely more credible, although there is never any way of knowing.

The difficulty that remains, as ever, is how to get all this fuel out of the country. The fate of the trans-Afghan TAPI pipeline has been cast into doubt yet again by events in Afghanistan. (The Taliban have, though, professed to be supporters of TAPI, so there’s that).

The export diversification agenda did advance one little step last week, however, when Turkmenistan began, as promised, to supply Kyrgyzstan with electricity. Under a deal detailed by the Kyrgyz Energy and Industry Ministry, Turkmenistan will supply almost 502 million kilowatt hours of power through to December.

The financial terms of the agreement have not been made public, but if they are advantageous, there is every reason to believe they could be built upon. The amount of electricity that Turkmenistan is sending over five months is only slightly more than half the 970 million kilowatt hours that Kyrgyzstan used last month alone. And demanding keeps surging.