Reliving ancient glory, exaggerating modern accomplishments, and introducing ATMs that demand to see birth certificates: This and more in our weekly Turkmenistan briefing. 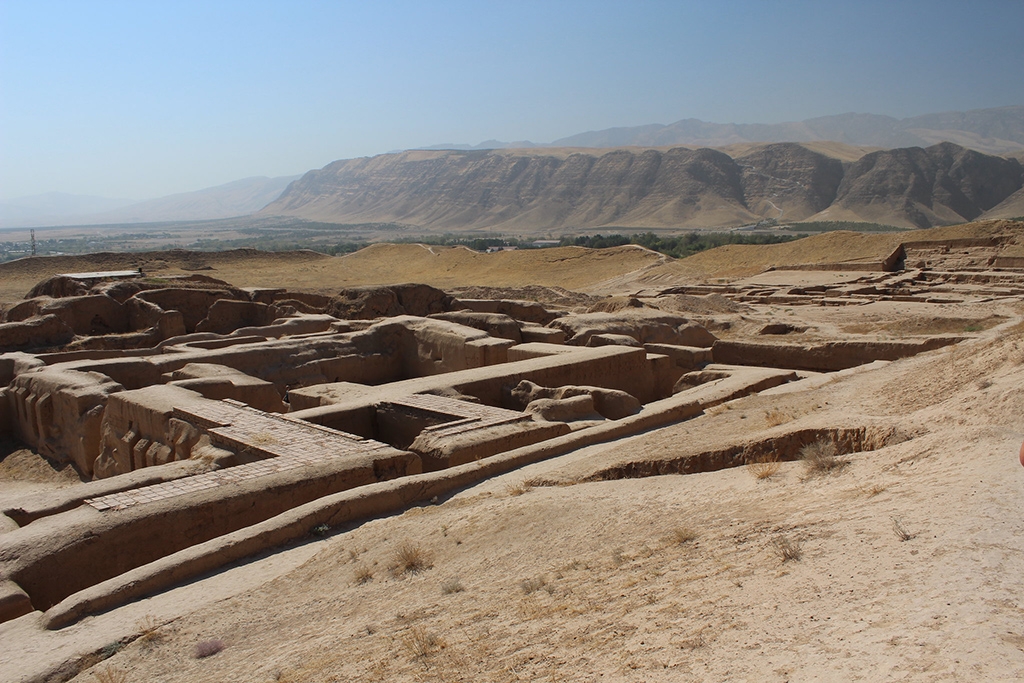 Nisa, one of the Parthian capitals (photo: Thomas Liptak/CC)

At its height in the second century BC, the Parthian Empire stretched from the Persian Gulf, along Mesopotamia and held sway over Indus kingdoms. One of the empire’s royal capitals was the city of Nisa, situated in modern-day Turkmenistan.

The few tourists that Turkmenistan allows into the country are often taken to visit the remains of that ancient settlement, which is designated by UNESCO as a world heritage site of outstanding universal value.

Turkmen authorities too have long been alive to the value of those remains, although for more political reasons. As the scholar Shahram Akbarzadeh wrote in a 1999 paper: “By claiming [the ancient Parthian civilization] as its own, the nationalist elite fosters pride in the national community of Turkmens. Turkmen national culture is assumed to have pre-dated modern times and the Turkmen state is merely uncovering the past glories of the Turkmen nation.”

This theme is as relevant today as it ever was. So at a Cabinet meeting on September 11, President Gurbanguly Berdymukhamedov was informed how new discoveries of ancient Parthian vessels were made during recent land surveying operations in the capital, Ashgabat. Nisa, the place with the more legitimate claim to antiquity, is around 20 kilometers outside the city, but it appears Berdymukhamedov would like a sprinkling of that archeological glamor closer to his seat of power.

“The president stressed that [the artifacts] could significantly complement the already-established ideas of scientists and historians about [how and when] the Turkmen capital was formed,” the state news agency reported.

Thoughts have latterly turned to making this an international brand.

In a telephone exchange earlier in the month with Italian President Sergio Mattarella, Berdymukhamedov suggested mounting an archaeological exhibition in Italy to show off Turkmenistan’s Parthian possessions. A similar exhibition was organized in Germany in 2018.

These are rare opportunities for lovers of history to see objects hidden behind Turkmenistan’s high visa wall, and for Turkmenistan to do some bragging. Exhibitions are for peacocking after all.

At that same Cabinet meeting, Deputy Prime Minister Chary Gylydzhov reported on preparations for something called the Exhibition of Economic Achievements of Turkmenistan. The event will feature 70 stands “demonstrating the country's success in all areas,” the state news agency asserted.

The government needs to decide whether the country is, in fact, successful in all areas, though. Judging by how often Berdymukhamedov tears strips off his underlings, there appears to be much room for improvement.

The biggest gripe of the week came over the apparently sub-par performance of the Turkmenbashi international seaport, which the president is demanding be brought up to full capacity. The $1.5 billion port was inaugurated in May 2018 to much self-congratulation in state media, but bewilderment in other quarters as to how this facility would ever justify its price tag.

To make demands during a border-blocking pandemic feels particularly unreasonable, but it seems there is now movement on that front, at least.

Iran’s Mehr news agency reported on September 7 that the Sarakhs border terminal has finally, if only temporarily, begun to admit traffic. The numbers are still modest. As Mehr notes, only 10 Iranian freight trucks are being allowed through daily. The vehicles are left in the neutral zone and then taken to their final destination by Turkmen drivers.

And then on September 9, Turkmenistan admitted what state-friendly media have dubbed China’s longest freight train, which consisted of 48 containers. The train left the Chinese port city of Qingdao two weeks earlier and had, once it reached its final destination in Annau, just outside Ashgabat, covered 8,780 kilometers. The plan is to have this train ply the same route twice a month, theoretically carrying goods both ways.

If banks are represented at the Exhibition of Economic Achievements, accountholders may be entitled to be annoyed. Amsterdam-based Turkmen.news has reported that Turkmenistan Bank has since September 8 introduced a coupon system for using its ATMs, meaning that people wishing to withdraw their own money must wait in two lines. First to collect the coupon, essentially an entrance ticket, and then at the ATM itself, where users are sometimes asked to present their birth certificate.

This is partly a symptom of cashflow woes, but it is also the result of a drive to push people toward quitting hard cash in favor of more easily taxable card-based transactions. The only problem is that retailers are not always equipped or willing to accept payment with cards.

Berdymukhamedov wants to see the banking sector evolve into a private sector affair. Turkmenistan at the moment only has one ostensibly private lender: Rysgal Bank. The president has ordered that Halkbank be converted into an open joint-stock company. This lender is Turkmenistan’s default savings and pensions institution, so any changes made there are of deep significance to the population at large.

Not that people will ever be able to express discontent over any policies without facing repercussions. Even so, opposition forces based abroad are urging their fellow countrymen to come onto the streets and rally. Murad Kurbanov, the head of the Democratic Choice of Turkmenistan, promised, from his safe perch in exile, that anybody who took to the streets on the appointed dates of September 14 and 25 would be paid the equivalent of $500 once his party comes to power.

It does not look like this hypothetical and conditional payment has had the desired effect.

The plight of Pigambergeldy Allaberdiyev illustrates why people are afraid. The 48-year-old lawyer was detained on September 5 in the western town of Balkanabat on suspicion of ties to activists in the foreign-based protest movement. Moscow-based rights group Memorial said in a September 10 statement that Allaberdiyev is facing charges of assault and hooliganism after he became the target of a staged brawl with an agent provocateur. Although this is worrying news for the lawyer, it represents a considerable reprieve from the terrorism charges that had previously been mooted.