Abu Dhabi invests in green energy, China gets another drilling contract, and Ashgabat cuts funding to universities. This and more in our weekly Turkmenistan briefing. 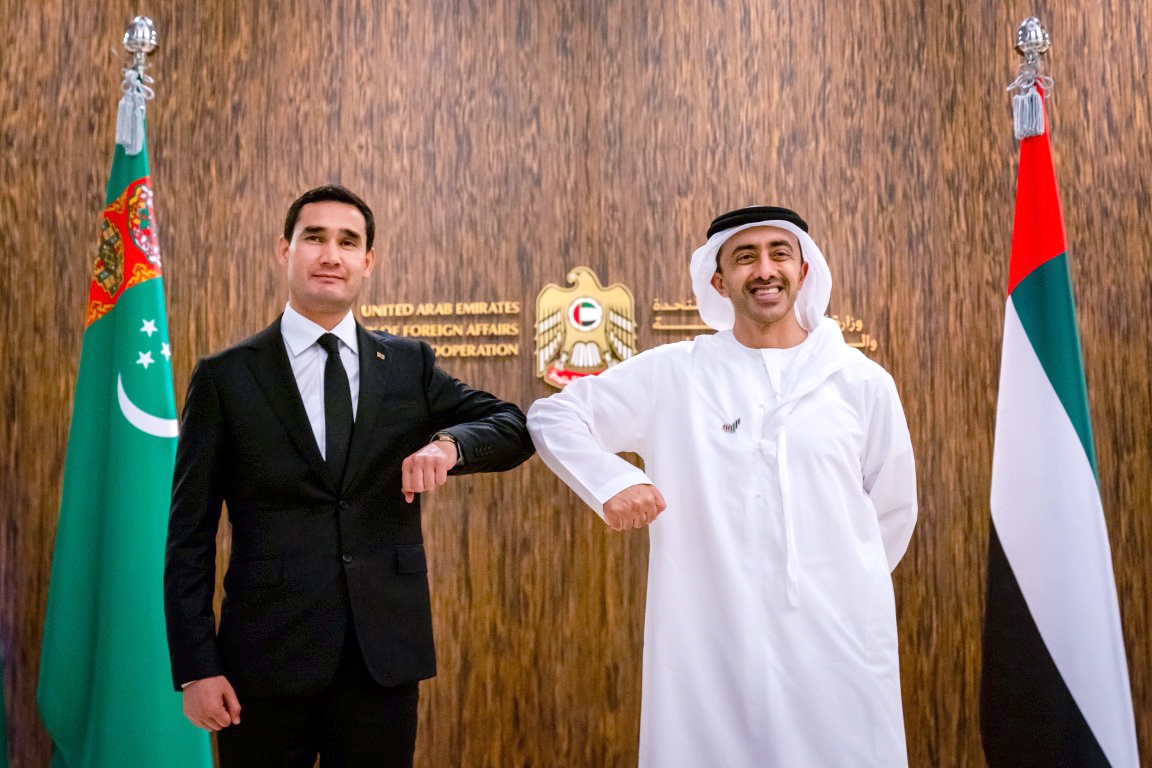 The president’s son, Serdar Berdymukhamedov, negotiating for aid this month in the UAE. (Turkmen Foreign Ministry)

As a country so well-endowed with oil and gas riches, Turkmenistan has devoted little serious thought to green energy. That may be changing.

At a cabinet meeting on June 19, President Gurbanguly Berdymukhamedov approved the construction of the country’s first hybrid solar and wind power plant.

This, the president said, would help advance implementation of the National Strategy on the Development of Renewable Energy, which makes it sound like this was his idea, although it almost certainly was not.

What Berdymukhamedov omitted to mention is that building this relatively paltry 10-megawatt plant in the western Balkan region is being paid for with foreign money – namely, around $25 million of credit extended by the Abu Dhabi Fund for Development, or ADFD. The Emirate has in fact been extending similar lines of credit to multiple developing countries, putting the ostensible regional energy titan Turkmenistan on a par with places like Antigua and Barbuda, Burkina Faso, Chad, Cuba, the Maldives, Nepal, Saint Lucia and Saint Vincent and the Grenadines.

The job to build the plant has been put out to tender, and there is a good chance an Abu Dhabi company will get the job – the way the Dhabi Future Energy Company has just won contracts to build two 200-megawatt solar power plants in Uzbekistan – making this something of a circular form of assistance.

That is not the only thing that Abu Dhabi credit is paying for in Turkmenistan. And the fact that only one-quarter of the 15-year loan, negotiated by Berdymukhamedov’s son, Serdar, is going toward a hopefully sustainable, clean-energy project speaks volumes about where Ashgabat’s priorities lie.

Another $75 million is going toward constructing an international air terminal in the town of Jebel, also in the Balkan region. (The Turkmen Foreign Ministry was coy about the dollar figures, incidentally, leaving the work of talking numbers to the ADFD’s press office). There is already an international airport in the city of Turkmenbashi, around 140 kilometers west of Jebel, making this expense a matter of possibly dubious merit.

But expenditures of dubious merit are very much Turkmenistan’s bag. Last week, for example, saw Turkmenistan Airlines take receipt of the last Boeing 777-200LR to roll off the production line. The LR in that craft’s name stands for “long range,” because the plane can fly distances of more than 15,000 kilometers. That is three times more than the longest routes currently offered by Turkmenistan Airlines. This anomaly prompted one airline news commentator, who described this purchase as “one of the strangest fleet decisions of any airline,” to wonder wryly if Turkmenistan has unannounced plans for an Ashgabat-Fiji route up its sleeve. But there may be another reason that underscores Ashgabat's lack of green credentials: The extra-large fuel tanks would enable the carrier to make most round trips without refueling, allowing it to fill up on heavily discounted jet fuel at home (while the heavier plane guzzles more on the outbound flight).

In other international economic cooperation news, the China National Petroleum Corporation, or CNPC, has won the contract to drill new wells at the giant Galkynysh gas field. The job had been put out to tender and CNPC’s offer was found to be the “most worthwhile.”

It does rather sound, though, that CNPC was chosen because Turkmenistan struggles chronically to generate a cashflow that would permit it to broaden its options. The drilling project is designed to last 30 months and payment will be made in the form of 17 billion cubic meters of gas delivered to China over a three-year period. Which is to say that more than one-tenth of the gas that Turkmenistan will be sending to China over that span of time is to be used to pay a Chinese state company to complete the job of drilling for its own gas.

Given how Turkmenistan finds it so difficult to pay its way with international partners, it makes it all the more brass-necked for the government to carp on about financial self-reliance – not that it stops them.

At a government meeting on June 18, Deputy Prime Minister Gadyrgeldy Mushshikov talked about the transfer of several universities to a system of self-funding from the academic year 2021-22, thereby enacting plans that have been in motion for a few years now. The colleges in question include some of the country’s most important centers for technical education in the country, specifically in the areas of oil and gas engineering, finance and economics, and architecture and construction.

Just how universities are supposed to pay their own way is never properly explained. Fees are presumably one option, although anybody with the means to do so prefers to pursue more respectable levels of study in countries like Russia and Belarus, or even Turkey and China. After all, why young people would want to saddle themselves with debt to pay fees to a university issuing degrees unrecognized anywhere else in the world is hard to understand.

Turkmenistan has more forceful ways of keeping young people from taking off for foreign shores too soon. As RFE/RL reported on June 21, dozens of graduating students who arrived at their schools this week to sit their final exams were instead dragged away by military recruiters. The raids – state-organized kidnappings, in effect – are said to have happened at schools in Ashgabat on June 15 and in the eastern Lebap province on June 16. Young people have every reason to avoid military service. Between forced labor in the fields, hazing and potentially dangerous duties on the Afghan border, conscription is a time of sheer misery.

Even if flight were an option, few people, let alone students, can at the moment leave the country anyway. Even though Turkmenistan claims to have never recorded a case of COVID-19 – medical specialists are either lying or have contrived to not see the obvious out of fear of upsetting their president – unyielding travel restrictions are in place.

Neutral Turkmenistan daily newspaper on June 19 carried details of a new raft of protective measures being undertaken by the government on its front page. Most notably, citizens arriving from abroad will be required to observe a 21-day period of quarantine. The newspaper says a coronavirus vaccination campaign is ongoing, but it refrained from stating how many people have got a jab to date, an omission that does not inspire great confidence.

Amsterdam-based website Turkmen.news has taken on the unenviable task of trying to lift the heavy veil of secrecy and piece together what impact COVID-19 has had on Turkmenistan and their detailed report published this week (also in English) is worth careful scrutiny.