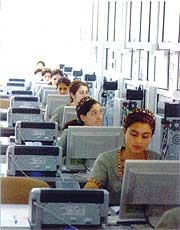 Things can't be good at Altyn Asyr, the sole state cell phone provider in Turkmenistan, now alone in the market since the forced departure of Russia's MobileTelephone Systems (MTS) last December and the loss of cell phone and Internet service for 2.4 million people. Not only does Altyn Asyr lack the capacity to pick up the slack left by millions now clamoring to have their cell service restored, it may face competition from foreign joint ventures which President Gurbanguly Berdymukhamedov wants to make with Nokia Siemens and Huawei as announced in the spring, although it's not clear these are operating yet.

Meanwhile, the president is beating up on the minister of communications again, blaming him for the poor functioning of Altyn Asyr. Minister Ovlyaguly Jumagulyyev was reprimanded publicly at a televised government meeting July 29 for "the low level of organization" and "the overall state of affairs" in the communications industry, turkmenistan.ru reported. The minister was given just three days to fix things or he would be fired. No details were given about exactly what was wrong, but somehow, it doesn't seem likely that the Turkmen leader was concerned about citizen journalists facing obstacles getting their pictures of the explosion in Abadan to the outside world.

That's because the government is busy cracking down on anyone who tried to cover the tragedy, the details of which officials continue to try to suppress.

The National Security Ministry (MNB) and the Ministry of Internal Affairs (MVD) have begun tracking down people who sent out stories about the Abadan explosion, News Briefing Central Asia (NBCA) reports.

Police are checking everyone with a mobile phone subscription and web access, which is easy to do as there is just one state provider. NBCA says police are going door to door and confiscating phones and cameras from young people -- and trying to match them up with photos found on the Internet. Police were reported to be looking for Serdar Aytakov, a blogger for the independent Russian radio station Ekho Moskvy, who gained prominence in the aftermath of the Abadan explosion for his reports.

Dovletmyrat Yazgulyev, a free-lancer for Radio Free Europe/Radio Liberty, was interrogated and threatened with criminal prosecution. Despite these threats, sources told NBCA that people had ceased being afraid, especially after they saw their alternative narrative helped apply pressure on authorities to tell the truth.

President Berdymukhamedov is also unhappy with the print media, and at a government meeting last month denounced Vice Premier Maysa Yzmukhammedova for the poor performance of the media.

The Turkmen leader complained about "the incompetence and unprofessionalism of authors who undertake to write articles on topics about which they have only a superficial notion," turkmenistan.ru reported. He ordered the vice premier to raise the professional level of newspapers and magazines.

But the president's idea of what constituted incompetence may have involved saying too much. He also reprimanded Yamukhammet Yzlyyev, head of the Cabinet of Minister's Committee for State Secrets in the Print and Other Mass Media for "shortcomings" in his work.

Berdymukhamedov may have run out of people to work for the media, given how many heads have rolled since he took office. That may explain why an editor previously dismissed "for health reasons" has unexpectedly been brought back, chrono-tm.org reports.

Annamurad Poladov, the former editor-in-chief of the national newspaper Turkmenistan, was dismissed 18 months ago apparently due to collective punishment related to a relative's offenses. Last August, he was given a stint at the State News Agency of Turkmenistan, where he distinguished himself with articles praising the president, then returned to his previous position this year this month.