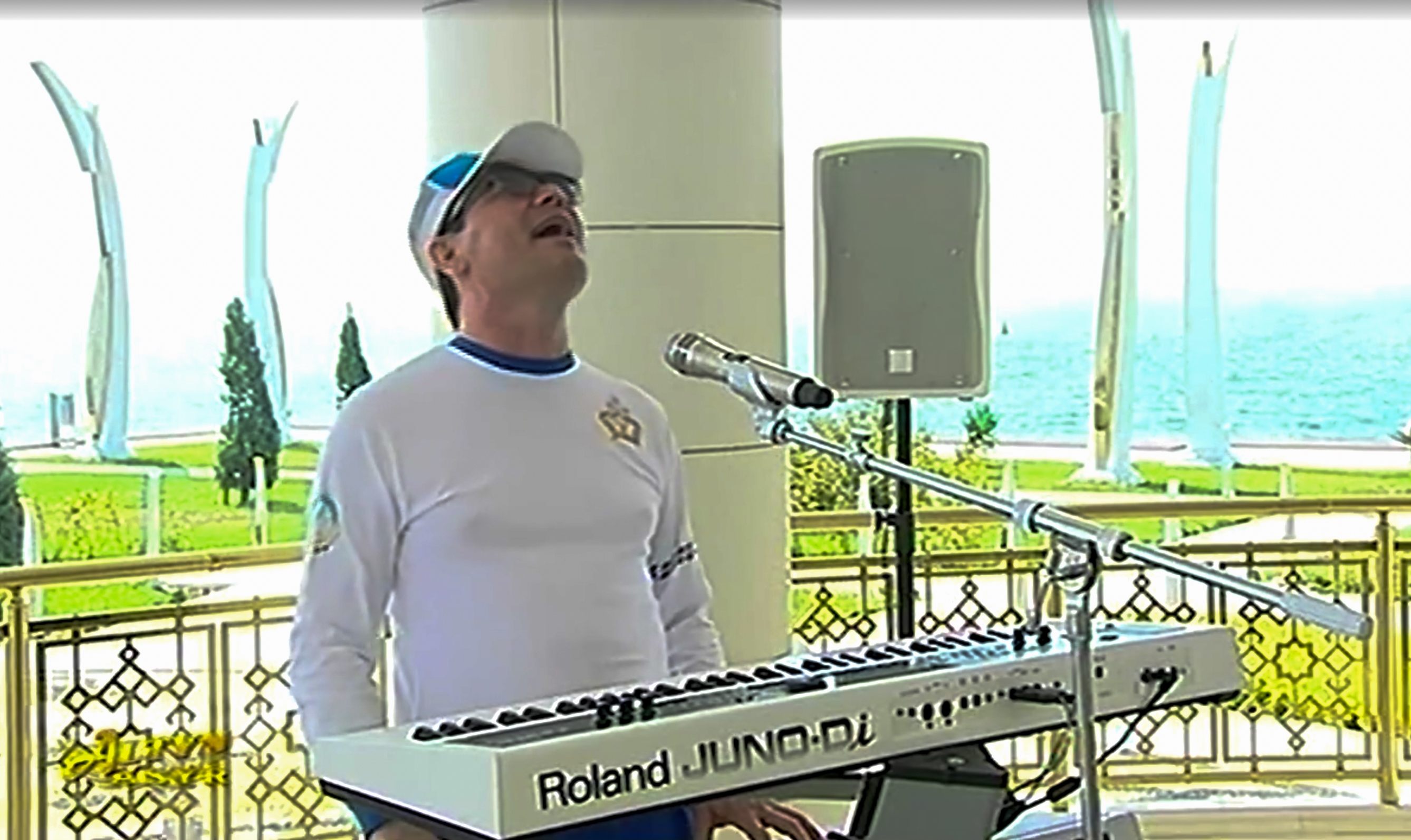 Turkmenistan’s economy may be steadily slipping down the tubes, but President Gurbanguly Berdymukhamedov has once again regaled his increasingly desperate population with a self-regarding exercise in singing and keep-fit antics.

State television on July 28 reported on Berdymukhamedov’s latest visit to the multibillion dollar white elephant Caspian report of Awaza, where he began one morning with a group gym workout routine with the Cabinet and the parliament speaker. To begin with, all the officials stood in line like schoolchildren as they attentively watched their president do his thing on a range of fitness machines, after which they followed suit themselves and played a round of volleyball.

After that, as the TV report related, the guys all hit the beach at the official presidential residence, where Berdymukhamedov and three grandchildren were busy “working on some verses for a new song called ‘I remember.’”

“In the course of the creative process, the head of state taught each of his grandchildren to reproduce the melody of this song on various musical instruments. Berdymukhamedov then performed the new song with his grandchildren, who showed great zeal and diligence in the musical arts,” state media reported.

The trio of grandchildren — a sort of latter-day Central Asian Huey, Dewey, and Louie — then hit their respective instruments. One played the piano, the others did their parts on a mixing deck and some kind of electric drum kit. Also bashing out the melody — which unkind observers might describe as inane drivel — on a synthesizer, Berdymukhamedov, known to his subjects as Arkadag (“The protecter”), lost himself in the moment, throwing his head up in jubilation and beaming frenziedly at the refrain.

“Embodying a bright love reflected in all the beauty of the world, this song, born of the remarkable talent of Arkadag, will soon be presented to the general public as a wonderful gift from the leader of the people to the Turkmen nation,” Neutral Turkmenistan newspaper noted on July 28, reaching new heights of rhapsody in its adulation of the president.

Turkmen people have more fun in store this weekend.

On July 29, Berdymukhamedov is set to be at the head of a mass cycle ride to mark 50 days until the opening of the 5th Asian Indoor and Martial Arts Games in Ashgabat. From 7 a.m. to 7 p.m., traffic will be limited in cities across the entire country and only moving around on bicycles will be permitted. The head of ministries and diplomatic missions too are naturally to be enlisted in the exercise.