Turkmenistan: Rebuke to the future

The president seems troubled by the well-documented shortage of hard currency. This and more in our weekly briefing. 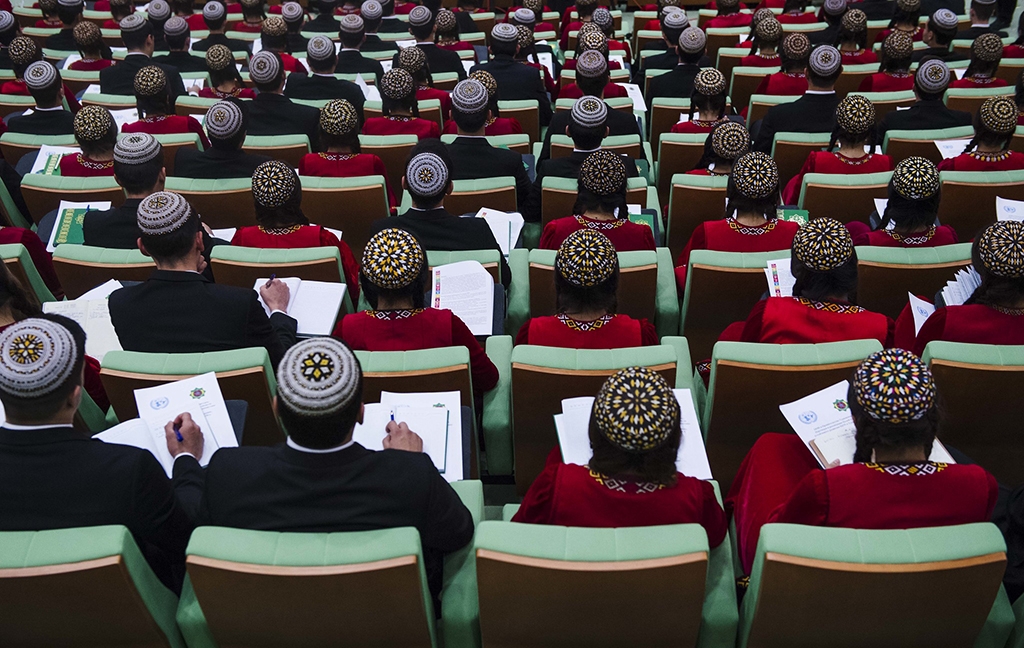 What are the kids learning these days? (UN photo)

One might imagine Turkmenistan’s president should be in a good mood these days.

In the space of less than one month, prospects for two major and perennially elusive natural gas export projects – the Trans-Caspian Pipeline and the trans-Afghan TAPI pipeline – have improved substantially.

But you would not know this for all the grumbling President Gurbanguly Berdymukhamedov is doing. Admonishments were being handed out to top officials like they were going out of fashion at a February 2 government meeting on the energy sector.

Turkmengaz gas company chairman Batyr Amanov, the head of the state oil company Guichgeldi Baigeldiyev, the head of state geological agency Turkmengeologiya, Merdan Roziyev, and the director of the oil refinery network, Dovran Chishiyev, were all called on the carpet for “unsatisfactory results over the past year.” Amanov and Baigeldiyev got “severe reprimands,” which is highest level of scolding a Turkmen official can receive from the president short of outright dismissal.

Berdymukhamedov’s subsequent recommendations hint at what is troubling him. He demanded the “elimination of unnecessary costs in the oil and gas company,” which is likely code for downsizing. He is also irked that productivity and profit are disappointing, despite what he described as the government’s large investments. Oil-based products are selling at uncompetitive rates on the international market, he said.

Berdymukhamedov then grumbled that the $3.4 billion Kiyanly petrochemical plant built in 2018 and a $1.7 billion gas-to-liquids plant near Ashgabat are still yet to reach full design capacity. On this point, the president made a rare, if veiled, allusion to the country’s well-publicized hard cash shortages.

“The head of state stressed the importance of increasing the influx of funds by boosting the sale of manufactured materials, including in exchange for freely convertible foreign currencies,” the state news agency reported.

In one remark that could sound ominous for investors, Berdymukhamedov complained about the decline in the output of gas at projects being developed by foreign companies under production-sharing agreements. He mentioned no names, so that could be an allusion to any of several candidates. The biggest player in the PSA game, though, is China National Petroleum Corp., which is developing the Galkynysh and Bagtyyarlyk mega-fields. It hardly seem likely Berdymukhamedov would want to pick a fight with Beijing, however.

The question of foreign currency is evidently weighing on Berdymukhamedov’s mind because he returned to it at a February 5 government meeting on trade. At that time, he again exhorted local manufacturers of processed raw materials and textiles to up their performance so that they might set “high and competitive prices for export goods.” And let exporters not imagine for a moment that he won’t be checking.

“Instructions were issued in this regard to perform a monthly analysis on the volume of foreign exchange receipts,” the government website noted.

Many other officials had a torrid week too. Maybe the most eye-catching case was that of Culture Minister Atageldi Shamyradov, who has been given his “last warning to correct his shortcomings in the shortest possible time.”

What is Shamyradov’s offense? Apparently, not doing enough to develop national culture.

“Last year, we celebrated the 25th anniversary of the permanent neutrality of our sovereign state, but no significant cultural events were organized to mark the occasion,” Berdymukhamedov fumed, talking about 2020, the year the entire globe was being consumed by the coronavirus pandemic.

What is more, universities are not preparing undergraduates for the workplace and children’s art schools are not up to scratch.

Perhaps worst of all, theater and culture centers are apparently not staging enough shows lauding the Turkmen state’s achievements and the happy life of the population.

And the moving pictures folk need not get too comfortable either. Addressing a virtual gathering of state media officials on February 7, Berdymukhamedov declared that the State Committee for Television, Radio Broadcasting and Cinematography is gradually being transitioned to a self-financing model.

This is of a piece with all the talk about Turkmenistan converting to a full-fledged market economy, but it is hard to see how the staid propaganda machine, whose output few would ever consume out of choice, can be made commercially viable.

Apart from anything else, local media must also contend with the challenge of foreign competition posed by the internet. At that same February 7 meeting, the president demanded an improvement in access to the internet. And sure enough, within one day, state-owned Turkmentelekom slashed its monthly fee for 256 kbps connections from 150 manat ($42.6 at the official rate, roughly $5 at the black market rate) to 100 manat. The cost of what would be deemed a just-about acceptable connection in the rest of the world (2 Mbps) has been dropped substantially, from 350 manat to 200 manat.

This may be hubris or signal confidence in the state’s ability to enforce its suffocating internet censorship policy. Any sites deemed to contain critical content are blocked. The 256 kbps connection that has been most affordable to hard-up Turkmen internet users is slow to the point of making even viewing a YouTube video a frustrating experience. At higher speeds, blockage-circumventing VPNs become more viable. But as RFE/RL’s Turkmen service, Radio Azatlyk, reported last year, the functioning of VPN services has become patchier in Turkmenistan, indicating that the authorities are improving their ability to enforce censorship.

It is certainly not a matter of liberalization. Azatlyk reported at the end of January on how moral education teachers in the eastern Lebap region have fulminated against schoolgirls watching unsuitable films and reality shows on Russian and Turkish TV stations. Licentious content has, they suggest, led to a surge in teenage pregnancies.

Social media is no less evil.

“At one assembly in the Farap district, police officers in attendance mocked and insulted female high-schoolers and threatened them with 10-day jail terms for using TikTok,” one of Azatlyk’s sources claimed.