The president’s fury has only served to expose once more the implausibility of official data. 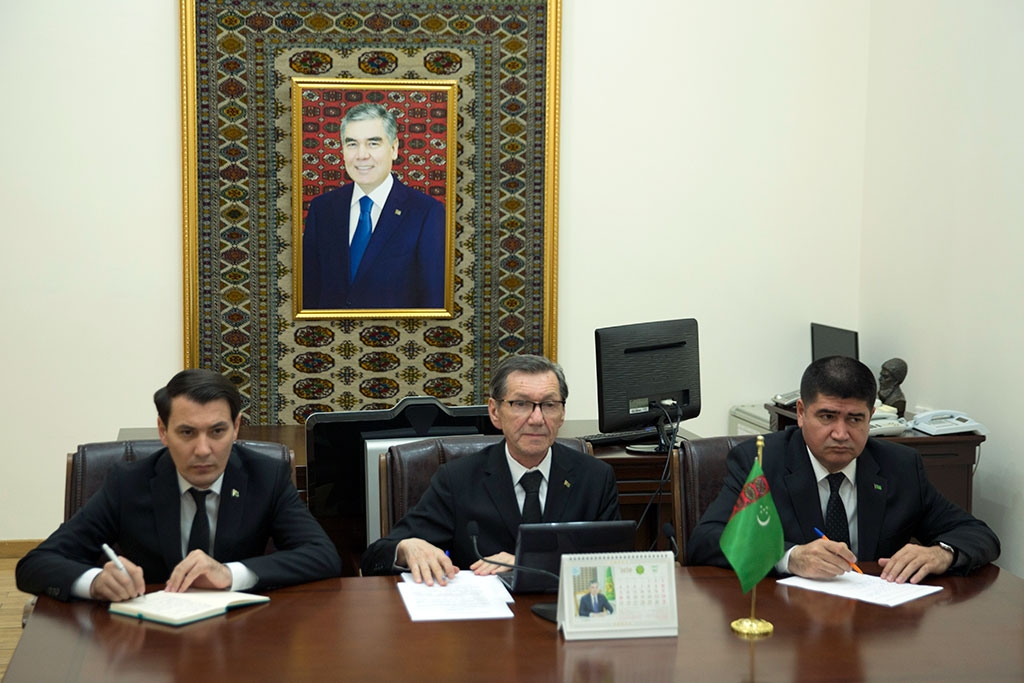 Top officials in Turkmenistan are again quaking these days as the president scans the field for people to blame for the country’s woes.

At a Cabinet meeting on October 9, Gurbanguly Berdymukhamedov fired off reprimands for three deputy prime ministers, with the portfolios for the oil and gas sector, for transport, communications and industry, and for trade, respectively.

The president’s fury has only served to expose once more the implausibility of official data.

Myratgeldi Meredov, for example, earned his chiding after informing the president of a purportedly glowing set of oil and gas production figures. Berdymukhamedov wasn’t buying it and complained of the lack of growth in oil production, among other things. “The refining industry, which has been operating at only 40 percent capacity for a long time, is not at the proper level,” he said.

Bayramgeldi Ovezov has, it seems, been remiss in failing to properly implement the president’s digitalization campaign.

And finally, Chary Gylydzhov was praised on one hand for successfully reducing the volume of imported food goods coming into the country, but Berdymukhamedov grumbled that the operations of certain large, unnamed joint-stock companies were suffering from slow work and lack of funding.

That was far from the end to the president’s unhappiness. Construction and Architecture Minister Rahim Gandymov got flack because building standards have not, according to Berdymukhamedov, yet been “brought in line with international standards” and there is no proper quality control. Moreover, he implied that construction of a new capital for the Ahal province was going at too slow a pace. This is an awkward point, because it is his son, Serdar, currently serving as industry minister, who has been overseeing that particular project.

A leading problem on this front, as Vienna-based Chronicles of Turkmenistan has noted previously, is that the country is struggling to produce or import enough cement. The website reported on October 5 that this construction material has disappeared from the shelves of private and state-owned stores alike.

Iranian cement has been particularly hard to source after a key supplier was detained, Chronicles reported.

On paper, Turkmenistan is still clinging to its fiction about being coronavirus-free, but that fantasy has unraveled a little further with Berdymukhamedov’s decision, on October 9, to fire Purli Agamyradov as the deputy prime minister with the portfolio for healthcare. Agamyradov was, at the same time, removed as chairman of the extraordinary commission for the prevention of the spread of diseases. A former chemistry lecturer and minister of education, Mammetmyrat Geldiniyazov, has been appointed in Agamyradov’s place.

It is clear that the COVID-19 situation is not just serious, but that it may yet still be escalating.

RFE/RL’s Turkmen service, Radio Azatlyk, reported on October 12 that the country’s main quarantine facility, currently a hospital in the Lebap province, is being moved to the premises of a former construction company.

“This quarantine zone is designed to hold 1,000 people,” a correspondent for the broadcaster reported, citing unnamed health officials. “Five hundred people who were being kept in quarantine at the general hospital will be relocated there, and people coming from abroad will also be placed there.”

Quarantine tent camps are also to be dismantled and internees moved to the new site.

At the prevention end of the problem, increased measures are being adopted to make sure people maintain social distancing. Amsterdam-based Turkmen news reported that people with walkie-talkies are posted at bus stops in Ashgabat to ensure people board public transport correctly – only through the front doors – and that there is no overcrowding. This strict policing has received mixed reviews. Although some are satisfied that precaution guidelines are being more rigidly enforced, this is also leading to a drop in the capacity of the transportation system.

The same website has reported that police in the Mary province are fining people found not wearing a mask and threatening them with either being put in jail for up to 15 days or being forced to go pick cotton in the fields.

In the meantime, the October 9 Cabinet meeting was held in a packed room with little regard for social distancing or mask-wearing.

Berdymukhamedov may be twigging that he is not being provided with reliable information. Another head to roll on October 9 was that of Durdyly Durdylyev, the chairman of the Supreme Chamber of Control, a body that the president relies on to audit and investigate how public funds are spent. Durdylyev, who allowed “serious shortcomings in his work,” will be replaced by Rejep Charygulyev.

There were reprimands going around at the October 7 meeting of security officials too. Charymyrat Amanov, secretary of the national security council, was rebuked for general, unspecified shortcomings. Shadurdy Durdyev, the head of the State Border Service, was issued the more serious “strict reprimand,” which can, but does not always, precede dismissal. Berdymukhamedov says Durdyev has failed to “maintain discipline among his personnel."

But nobody has got it as bad as the chairman of the State Migration Service, Mergen Gurdov, who was fired at that same meeting. Chronicles has reported that he is now being investigated on suspicion of corruption.

This is a no-brainer. A department with the power to delay the issuance of passports and let people out of the country is endowed with fabulous revenue-making capabilities. The source informing Chronicles has said that regional departments of the service were sending Gurdov payments of up to $20,000 monthly.

On a more savory note, Berdymukhamedov has published the 12th volume of his seemingly never-ending series on the medicinal plants of Turkmenistan. And in another health-linked development, the president on October 10 unveiled Ashgabat’s new International Burns and Aesthetic Center. The center will offer reconstructive surgery, weight loss courses, massage therapy, and even hairdressing and cosmetology services. At the opening ceremony, Berdymukhamedov wowed his guests, who included medical specialists from Germany, Austria and Switzerland, by delivering a speech in German, mostly without consulting his notes.

The United States has now progressed to Turkmenistan in its new trilateral format for fostering more engagement between the ex-Soviet Central Asian republics and Afghanistan. This experiment was kickstarted in May, when Washington put itself forward to act a Sherpa for talks between Uzbekistan and Afghanistan. As was the case with the Uzbekistan talks, the October 8 teleconferencing conversation between U.S. Under Secretary of State for Political Affairs David Hale, Afghan Foreign Minister Mohammed Haneef Atmar and Turkmen Foreign Minister Rashid Meredov was focused heavily on trade and security.

How precisely the U.S. will advance the mission of implementing the serially delayed and postponed trans-Afghan pipeline project is uncertain, but these fresh words of encouragement will be welcomed in Ashgabat.