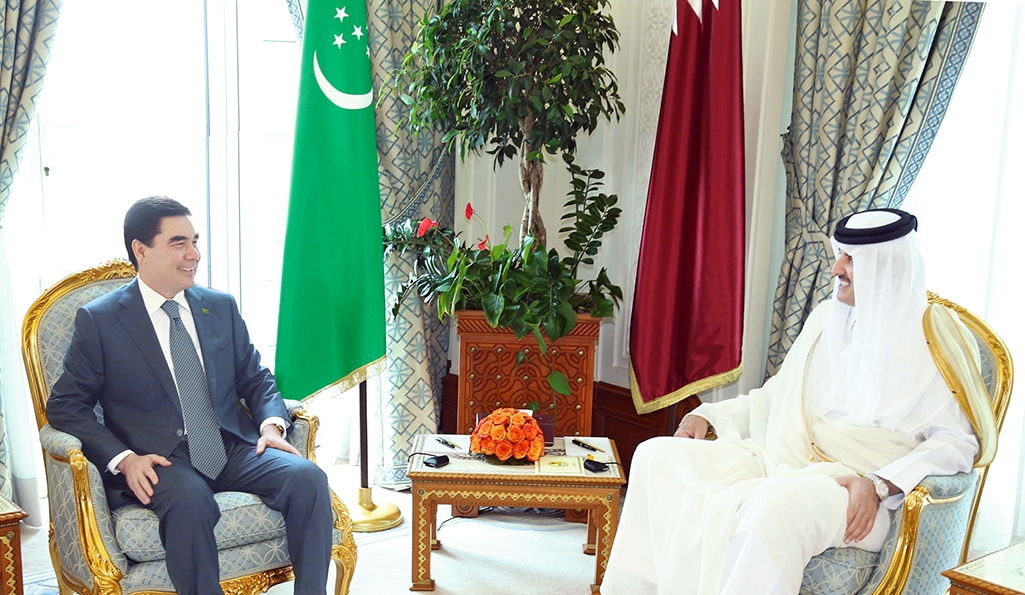 The president of Turkmenistan embarked on a two-day trip to Qatar this week in the hope of drumming up vital investment, although he does not seem to have come back any with any visible results.

Aside from meeting with Qatari emir Sheikh Tamim bin Hamad al-Thani and attending a banquet of honor, Gurbanguly Berdymukhamedov spent the day in Doha on March 15 holding talks with purse-string holders, like the chief executive of the Qatar Investment Authority. But the only firm outcome of the visit came with the signing of a spate of memoranda of understanding on cooperation in areas like energy, aviation, education and wildlife conservation.

Hopeful talk on energy was naturally at the forefront of Berdymukhamedov’s thoughts.

“Qatari companies have been invited to participate in the building of gas processing plants, and petrochemical and gas chemical plants in Turkmenistan, and to develop [energy] projects on the Turkmen shelf of the Caspian Sea,” the state news agency report on the visit stated.

Another would-be opportunity touted by Berdymukhamedov was for Qatar to sink money into the Turkmenistan-Afghanistan-Pakistan-India natural gas pipeline (TAPI), which will be indispensable if Turkmenistan is ever to loosen China’s near-monopoly grip on its energy exports.

Turkmenistan has looked at fellow gas-rich nation Qatar’s recent extravagant forays into foreign investments — which include Qatar Investment Authority’s recent joint purchase of a big chunk of Russian oil giant Rosneft — and must be hoping to get in on the act.

This plan has flaws that will be obvious to seasoned Turkmenistan watchers.

Ashgabat has traditionally proven allergic to most kinds of investment in its energy sector that entail granting the foreign partner tangible ownership stakes. The preference has always been for international companies to come in, complete projects — ideally at their own expense in anticipation of some deferred return — and then leave. In the absence of any public assertions to the contrary, it is likely this is the arrangement that Ashgabat would like Doha to entertain.

China has built such costly energy infrastructure in Turkmenistan, but only in the expectation that it would become the recipient of the end product. Qatar has its own huge energy reserves and would not, one would imagine, have any great eagerness to help rivals build up their own capabilities, unless it could expect to secure some equity in return.

So why Ashgabat imagines Qatar would want to spend colossal amounts of its money on undermining its own heavily gas export-dependent economic model is a puzzle.

And as he does with all outsiders, Berdymukhamedov suggested Qatar invest in offshore energy reserves — an apparent implicit confirmation of the fact there are no plans to let Doha obtain any kind of onshore field development license.

When Uzbek leader Shavkat Mirziyoyev visited Turkmenistan last week, Berdymukhamedov said that during his visit to Doha he would raise the issue of reviving dormant plans dating back to 2011 to create a five-nation transportation corridor linking Uzbekistan, Turkmenistan, Iran, Oman and Qatar. And so he did.

Ashgabat envisions the new cargo and passenger port under construction in the coastal city of Turkmenbashi as a key link in that regional corridor. Predictably enough, it has suggested Qatar chip in.

This suggests something has gone wrong, as when Berdymukhamedov broke ground on that $2 billion project in August 2013 together with Turkey’s then-Prime Minister Recep Tayyip Erdogan, it was predicted that construction would be done within four years — that is to say, in 2017. Work was undertaken by Turkish construction company GAP, a subsidiary of the Calik Group — a long-term presence on the Turkmen market. Turkmenistan has a well-documented habit of stiffing Turkish contractors. That and a cashflow crisis might be contriving to put the commissioning date for the port out of immediate sight.

It would be unfair to suggest talk was limited just to energy and transportation, however. Broader areas of trade were on the agenda, as evidenced by the holding of the maiden Turkmen–Qatar business forum on the eve of Berdymukhamedov’s visit.

The Turkmen state news agency also spoke vaguely about prospects for investing in high-tech in the energy and textile sectors, although it is not immediately obvious what the means in practice. All of the smaller details of this particular visit may become more clear if either country keeps to commitments to hold regular two-way trade exhibitions.

But even allowing for the possibility that talks between the two governments covered a reasonably broad area of issues, the optics of Berdymukhamedov’s trip are far from encouraging.

When a head of state leads such a delegation, it is often — but far from always — to put a formal seal on long-standing commercial or diplomatic negotiations. Instead, Berdymukhamedov cuts the figure of a door-to-door salesman desperately seeking to tout his wares, such as they are. In view of what is presumed to be the catastrophic state of Turkmenistan’s economy — the government has carefully ensured prying eyes are kept away, so the seriousness of the situation is little understood — the trip looks like just the latest expression of despair.