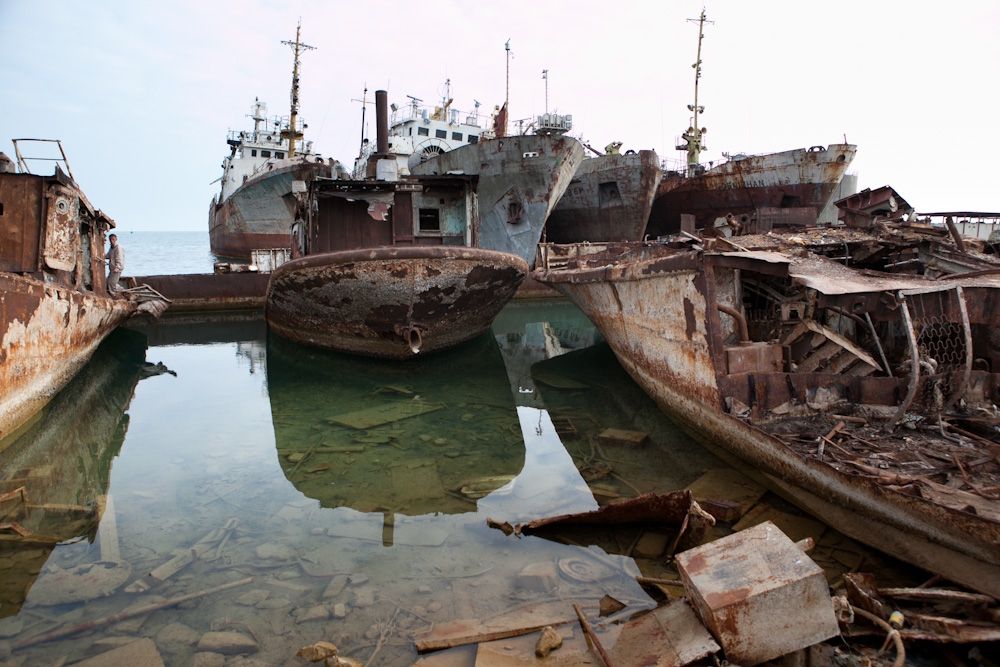 The word “wasteland” comes to mind when driving around Turkmenbashi, the oil and gas hub on Turkmenistan’s Caspian Sea coast. Rusting pipelines crisscrosses barren, sandy expanses; an acrid smell hangs in the moist, sea air. Though the nearby beaches were once a destination for holidaying Turkmen, today the health-conscious visitor might think twice before taking a dip. After reading a new report, that visitor might not need to think twice. Using satellite imagery, researchers at the non-profit American Association for the Advancement of Science (AAAS) in Washington, D.C. have shown the waters around Turkmenbashi suffer dozens of oil spills annually.“Sustained and ongoing release of oil into the waters of the Caspian Sea near the city and port of Turkmenbashi represents a legitimate environmental concern,” says the May 6 report by the Geospatial Technologies and Human Rights Project at the AAAS. “Frequent, low-volume spills often spread to cover a wide area and have been occurring semi-continuously for more than a decade.” In the past, efforts to detect oil spills remotely relied on expensive radar and high-resolution imagery. For this study, AAAS used publicly available NASA satellite imagery in a new way, allowing “for continuous monitoring of environmental phenomena, including oil spills.” Over 11,000 satellite images taken over 12 years corroborated on-the-ground reports of regular spills. “Between 2003 and 2012 … the AAAS team identified between 43 and 64 possible oil slicks every year in Turkmenbashi Bay.”The oil leaks come from both decaying Soviet-era facilities and new infrastructure used to feed the American-backed Baku-Tbilisi-Ceyhan Pipeline (BTC), which opened in May 2005. The pipeline led to an increase in oil production around Turkmenbashi, from where oil is shipped across the sea to Baku and transferred into the BTC. Crude Accountability – a watchdog that has been concerned about petroleum-related pollution (and corruption) in Turkmenistan for years – partnered with the AAAS on the project. "There are significant concerns about the impacts of human activities on the Caspian Sea,” Crude Accountability Executive Director Kate Watters said in a statement accompanying the report. “The sea is a closed body of water. There are serious threats to Caspian seals and to sturgeon, and since much of the world's caviar comes from that area, the situation poses a significant economic risk. We also are questioning what impacts oil pollution in the region may have on human health." All this is happening right under the noses of the few holidaymakers finding their way to the new Avaza resort, Turkmen President Gurbanguly Berdymukhamedov's signature project. Using the satellite images, an accompanying AAAS study shows how Avaza was created in the late-2000s by bulldozing a lively holiday bungalow town. "Residents were forcibly evicted and their property destroyed without compensation," says the report. Satellite imagery shows that "conversion from local vacation destination to international resort was possible due in large part to the demolition of over two thousand structures in the towns of Avaza and Tarta along the coast." (That created what a US official at Avaza’s grand opening in 2009 described as a “Potemkin” resort: “The beach was dirty. […] There was little to entice guests to lay on the beach or swim along the shore.”) AAAS believes that both the widespread pollution and the forced evictions constitute human rights violations.