Turkmenistan is finally going into lockdown – without admitting it has any cases of coronavirus. 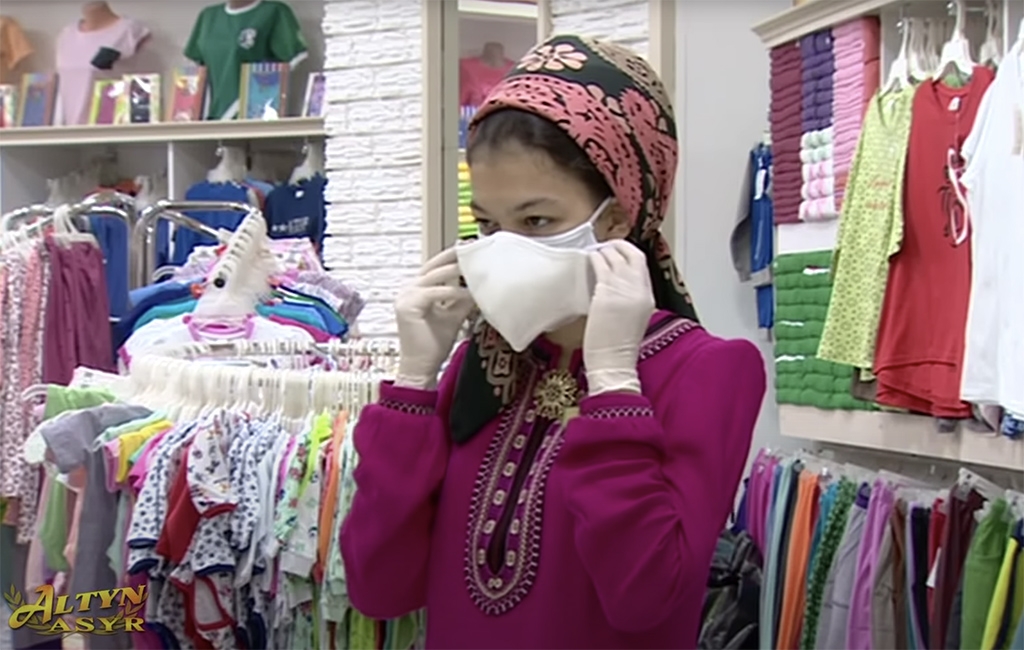 Mounting defenses against coronavirus has become all the rage in Turkmenistan. Odd, since the government still says it has found no cases.

Over the weekend, the Health Ministry issued an advisory “strongly recommending” the wearing of face masks in the first such candid official warning of its kind. It insisted the adoption of the protection would help defend against a purported surge of dust particles in the air. But it gave the game away by also advising the public to maintain social distancing. Similar guidance was published on the back page of state daily Neutral Turkmenistan on July 7.

The evening news bulletin on July 12 carried a brief item showing women buying cotton masks at a shopping mall in Ashgabat. Musical performers on television have demonstrated the technique for covering one’s face while singing alongside dancing cartoon masks.

The international community has got involved too. The United Nations office in Turkmenistan has produced a video encouraging people to avoid unnecessary physical contact with others and to wash their hands regularly. British Ambassador Hugh Philpott got in on the act, tweeting a selfie of himself wearing a mask emblazoned with cartoon chickens, advising others to do the same to protect against COVID-19 and other infections. In a subsequent Twitter exchange, Philpott deflects suggestions that he is implying that Turkmenistan is already grappling with a COVID-19 outbreak. “Please pay attention to the findings of WHO and Turkmen government experts, who are the experts here,” he insists with the air of somebody fearing the sight of a note verbal being slipped under his door.

The U.S. Embassy has been less circumspect, and on July 9 doubled down on earlier accounts of receiving “reports of local citizens with symptoms consistent with COVID-19 undergoing COVID-19 testing and being placed in quarantine in infectious diseases hospitals for up to fourteen days.” The last time the U.S. Embassy did this, the government fired off a note of protest, but it has not bothered this time.

The Russian Embassy has been only slightly more subtle in making its anxieties evident by announcing it is for now suspending in-person visits to its consular section. As Vienna-based Chronicles of Turkmenistan has reported, the Embassy is requesting petitioners to submit paperwork remotely.

The sudden mask frenzy is not incidental. A World Health Organization expert mission will by July 15 have wrapped up a 10-day visit to the country. The WHO is by nature averse to embarrassing host nations, so the chances that any findings presented this week will be explosive and revelatory are remote. But it feels difficult to imagine that even Turkmenistan will be brazen enough to try and pursue a business-as-usual line.

Indeed, the authorities are already implementing what looks like a partial lockdown – many weeks after most of the rest of the world did so. Ashgabat-based Arzuw – which is slowly emerging as one of the more useful and journalistically inquisitive local outlets, its intense cautiousness notwithstanding – has reported that railway travel is to be suspended until July 23 as a measure to prevent the spread of infectious diseases. Bazaars and shopping malls are being shuttered nationwide.

Amsterdam-based Turkmen.news relays accounts of more heavy-handed measures. Traffic police reportedly drive around Ashgabat with their lights flashing blaring instructions through speakers for people to refrain from leaving the house without a mask. Drivers stopped at checkpoints into the city and found without masks are made to buy them on the spot.

The mystery persists as to how a country as sealed as Turkmenistan could actually import the coronavirus, since “Turkmen government experts” have been stating for months that they are virus-free.

President Gurbanguly Berdymukhamedov took a moment out of his holiday to get on the phone and share a theory with his former Kazakh counterpart, Nursultan Nazarbayev. “As is known, dangerous substances can be carried by airstreams, especially in a complicated ecological environment,” the state news agency reported, conveying Berdymukhamedov’s words. The president appears to be suggesting here that coronavirus may be blown into Turkmenistan by the wind – a convenient, if utterly ludicrous, excuse that would enable his government to later dismiss charges it had been covering up an outbreak all along.

There is a possibility that Ashgabat may borrow from the playbook of nearby countries like Kazakhstan and Kyrgyzstan and make a half-admission by conceding to a pneumonia outbreak. Turkmen.news has collated claims of an alarming number of deaths. One apparent fatality was Kemal Uchkun, a Turkish diplomat who was reportedly admitted to the hospital on June 27 with a high fever and shortness of breath. Uchkun was purportedly tested for coronavirus on two occasions and got negative results each time. Longtime watchers of Turkmenistan’s energy industry were startled to hear of the reported death, also from pneumonia, of Yagshigeldy Kakayev, the president’s widely respected oil and gas industry advisor.

Just to be on the safe side, the Health Ministry has made a deal with certain Russian pharmaceutical manufacturers to buy “the required amount of antiviral drugs.”

On the subject of ill-health, the Turkmen manat looks sicklier by the week. Chronicles, which provides a weekly update on black market figures, reported on July 12 that the currency was trading against the dollar in the 24.5-24.8 range, down from 23.8-24.2 one week earlier. The manat was at around 23.4 in June. The official rate remains, as ever, 3.5 manat to the dollar.

Household buying power looms as a critical issue in the coming months. Berdymukhamedov devoted considerable time during this grain harvesting season to ensuring that production objectives were met. And he was assured in June that the output target of 1.4 million tons, yielded from 690,000 hectares, had been hit and exceeded, but such boasts have proven ill-founded in the past. Turkmenistan has to top up its grain supplies with imports, usually from Kazakhstan, but the coronavirus pandemic has injected some unwelcome uncertainty into food supply chains. Kazakh suppliers are eager to export, however, which will be a relief for Turkmenistan.

In another measure to shore up food security, Berdymukhamedov on July 10 approved the purchase of 14,000 tons of winter potato seeds from Russia.