The president’s father (the former president) is stealing the show. Plus, the latest on efforts to get Turkmen gas to Europe. Our weekly briefing. 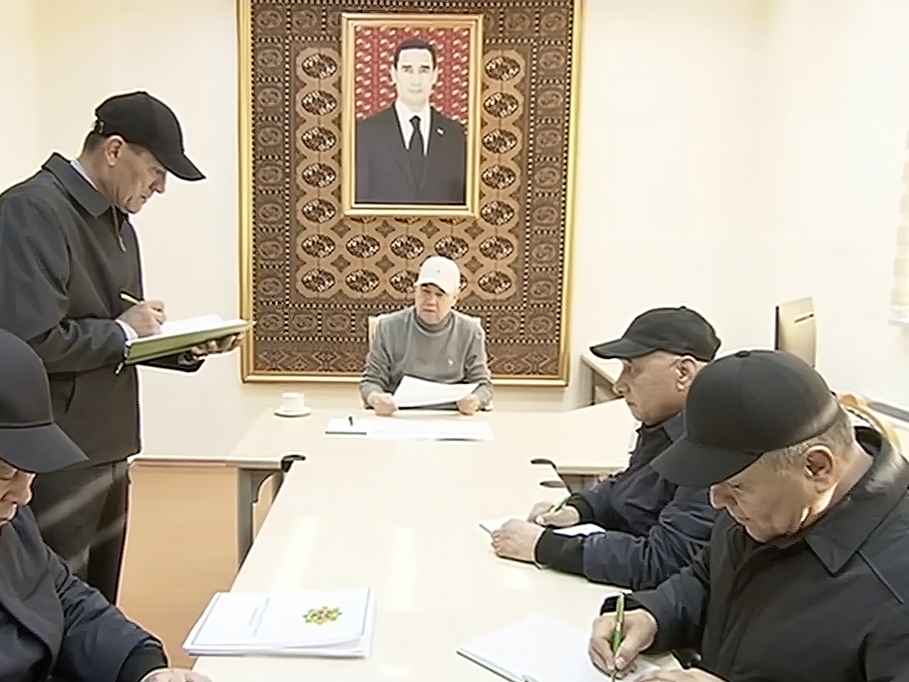 Even though Gurbanguly Berdymukhamedov stepped down as president in March to make way for his son, Serdar, he is increasingly behaving these days like he still runs the country.

On November 12, he headed out to the Mary province to conduct a personal inspection on the progress of the cotton harvest and the sowing of wheat. The micromanagement session was apparently necessitated by the difficulties being experienced in the agricultural sector.

President Serdar Berdymukhamedov has complained at times of the weakness of the irrigation system and, as Vienna-based Chronicles of Turkmenistan has reported, he demanded in October that farmers work faster so as to meet cotton and wheat targets.

Berdymukhamedov senior seems to feel that he is the one to get the job done. But as Ruslan Myatiev, the editor of the Turkmen News website, told the EurasiaChat podcast this week, this is institutionally inappropriate, since the elder Berdymukhamedov is now a mere head of the upper house of parliament.

“That’s not something the head of the Senate … should be doing. It’s the president’s prerogative,” Myatiev told EurasiaChat.

There is nothing new about this. In October, the former president presided over a meeting of regional officials and berated them over the potential prospect of the wheat harvest falling short of expectations. He made a point, incidentally, of absolving “hardworking rural workers” of the blame and instead pinning shortcomings on power-hungry panjandrums in the provinces.

None of this is technically within Berdymukhamedov senior’s purview, as Myatiev explained, although the line offered by state media is that it is parliament’s role to ensure political stability and strengthen social harmony. The solution looming on the horizon is for a rejigging of territorial administrations – a process that the former president intends to handle personally.

It all makes the actual president look a little foolish, since he is the person that is meant to be at the tiller. But it is probably telling that almost half of the one-hour-long evening news bulletin on November 12 was devoted to Berdymukhamedov senior’s visit to Mary, while his son’s activities got only a cursory mention. One can only guess at whether Serdar resents this state of affairs.

President Berdymukhamedov didn’t even get to attend the Organization of Turkic States heads of state summit in Samarkand, Uzbekistan, on November 11. That honor also fell to Berdymukhamedov senior. Perhaps by way of mitigation for this turn of events, Turkmenistan is only an observer member of the organization, but the optics don’t look great.

Berdymukhamedov senior’s speech was constituted of the usual forays into vague generalities, so it was left to others to offer specifics. He said in his speech that one of the priorities of the Organization of Turkic States should be to “intensify partnerships in the transport and energy sectors.” A couple of days later, Turkish President Recep Tayyip Erdogan indicated what that might have meant when he spoke anew of the idea of his country hosting a hub for the transportation of natural gas to Europe.

This idea has been in the ether since mid-October, when Russian President Vladimir Putin suggested during a side-event at a conference in Astana that Turkey could serve as an ideal transit point for the transportation of Russian gas to Europe. The idea of placing the hub facility in Thrace, right on the border with Greece, was floated shortly thereafter.

Erdogan said on November 13 that he intends to discuss this idea with the leaders of Azerbaijan and Turkmenistan in early December. It is not clear if this was a teaser for a long-awaited trilateral Azerbaijan-Turkey-Turkmenistan heads of state summit.

This whole initiative may pose a geopolitical conundrum, though. Europe is making sustained efforts to pivot away from reliance on Russian gas, mainly by falling back on liquified natural gas. This week, energy-rich Mozambique dispatched its first-ever shipment of LNG to Europe, while countries like Italy and Germany are scrambling to bolster regasification capacity.

The Turkish hub, meanwhile, looks like Moscow’s attempt to offload its spurned gas into European markets by mixing it with fuel from Azerbaijan and, theoretically, Turkmenistan. The latter’s involvement would require, ironically enough, completion of a trans-Caspian route that Russia has historically resisted.

In other energy-export news, officials from Turkmenistan and the Taliban regime in Afghanistan last week met to discuss the prospect of further supplies of Turkmen electricity to Afghanistan. An extension of the arrangement has got the thumbs up from the government in Ashgabat, said Turkmenistan’s ambassador to Kabul, Hoja Ovezov, who refrained from providing any figures.

It is clear that Turkmenistan is making little profit on these electricity sales – and there is every chance it is making a loss, since Kabul has struggled to keep up with payments to other power suppliers – so this deal looks very much like a case of Ashgabat putting its money where its mouth is in regard to its rhetoric on promoting stability in Afghanistan.

One of those purportedly amusing Turkmenistan factoids people used to be able to summon was that the late President Saparmurat Niyazov had once banned circuses, deeming them alien to his nation’s culture. It was read as a token of then-President Gurbanguly Berdymukhamedov’s tentative willingness to loosen things when this form of entertainment returned in 2010. Parliament is now going through the motions of adopting legislation regulating the circus arts, as the government website reported on November 9. The draft will, according to its authors, “define the legal and socio-economic foundations of state policy” on circuses, which is a need that the Turkmen state apparently feels like it must meet.

In another area of curious priority-setting, Turkmenistan’s National Satellite Agency has announced it has entered the launch-planning phase for its second space communications satellite. In 2015, a Turkmen satellite was blasted into orbit onboard a SpaceX craft. The 4.5-ton satellite was built on order by France’s Thales Alenia Space and has reportedly been operated by the Turkmen Communications Ministry to provide telecommunications services across Europe, Central Asia and Africa. But as National Satellite Agency director general Batyr Orazdurdyev has pointed out, the satellite has already completed half of its service life, so it is time for a replacement to be primed.