Serdar Berdymukhamedov has made his first consequential moves as Turkmenistan's president, offering hints of how he intends to rule. 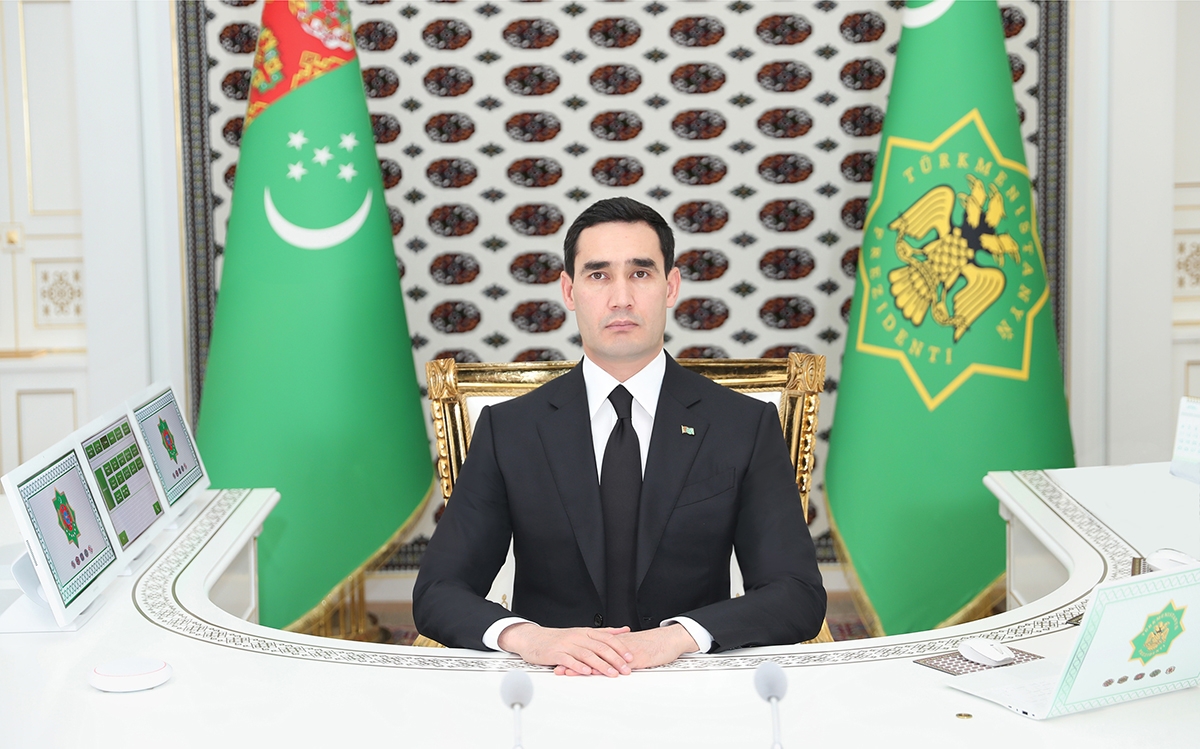 The era of Serdarism is slowly taking shape.

Turkmenistan’s newly elected president, Serdar Berdymukhamedov, began impressing his own brand on the regime this week with a targeted array of personnel changes.

At his maiden national security council meeting on April 6, almost everybody kept their job. But in a convoluted piece of theater, Berdymukhamedov fired the Interior Minister Ovezdurdy Khojaniyazov. The minister, complained the president, had over his nine months in the position failed to “exercise proper control over public order,” particularly when it came to ensuring road safety.

A state television report on the meeting then cut away to footage, also watched by attendees of the security council, of several men confessing struggle session-style to exceeding the speed limit. The vast majority admitted hitting speeds of up to 100 kilometers (62 miles) an hour.

One especially hardened delinquent, A. Gurbangeldiyev, reached 180 kilometers per hour in a 60-kilometers-per-hour zone. It will go down as just a curious coincidence that this man’s surname is so similar to the name of the president’s predecessor and father, Gurbanguly, who may have done more than anybody in Turkmenistan to celebrate the cult of high-speed motoring with his rally car antics.

Khojaniyazov will be replaced by Mukhammet Khydyrov, who formerly served as head of the Interior Ministry in the Lebap province.

What this dismissal seems to illustrate is that Serdar intends to preserve the controlling and micro-management approach – or at least the appearance of it – that was favored by his father.

In other security personnel management developments, for reasons unstated Berdymukhamedov scrapped the title of deputy prime minister with the portfolio for security, military and legal affairs. He also released Charymyrat Amanov from his position as chair of the security council, replacing him with Defense Minister Begench Gundogdyev.

There has been some mild but potentially significant tinkering on the economic management side too. Deputy Finance and Economy Minister Toyly Myalikov was released from his job to take the reins at the Central Bank and thus become Turkmenistan’s board member at International Monetary Fund. In what feels like a related appointment, Deputy Labor and Social Protection Minister Dovletgeldy Amanmukhammedov was put in charge of the superfluous and opaque, as it operates at present, State Statistics Committee.

In his inauguration speech last month, Berdymukhamedov pledged greater cooperation with the IMF, which likely means that the government wants to resume the fund’s periodic scheduled visits. Allowing that to happen would lend some credibility to claims that Turkmenistan wants to open up to the world, even if in purely economic terms. The last time the IMF dispatched a mission to the hermit kingdom was in 2019.

Myalikov looks like a trusted lieutenant. He was appointed deputy chair of the Supreme Control Chamber, a body which oversees government spending, in February 2021, which is when Berdymukhamedov took over that same body, so the two men obviously enjoy a healthy working relationship. Amanmukhammedov’s previous position, meanwhile, indicates that some level of seriousness is finally being accorded to statistics-gathering in that he would have by necessity been deeply involved in data compilation – at very least about the approximate number of people who actually live in Turkmenistan, one of the country’s many mysteries.

Gadyrgeldy Mushshikov, who had overseen the Central Bank since July 2021, has been tapped to take over the chair at Senagat, ostensibly a joint-stock, private-public-run bank, although this distinction is a fiction in Turkmenistan.

Berdymukhamedov is trying to take a firmer grip over the energy and farming sectors too. On April 8, he created two new presidential advisor positions to offer him guidance on those areas. Ashirguly Begliyev, the advisor on energy affairs, chaired the state-owned gas company Turkmengaz from 2015 to 2017, but was fired after receiving several reprimands. Annageldi Yazmyradov, the point-man on agriculture, is another figure being brought in from the relative cold. He was fired as deputy prime minister with the portfolio for agriculture in July 2015.

Meanwhile, at the April 8 Cabinet meeting, Esenmyrad Orazgeldiyev, the current deputy prime minister with the portfolio for agriculture, received a reprimand for “shortcomings in his work” – a Soviet-style formulation Berdymukhamedov clearly intends to keep alive. But the dubious honor of receiving the first reprimand – and a “severe reprimand” at that – from Serdar goes to Shakhym Abdrakhmanov, the deputy prime minister with the portfolio for oil and gas sector affairs, who has been in the job since early 2021. This was his last warning, menaced Berdymukhamedov.

But where was Berdymukhamedov senior, who still after all occupies the constitutionally important role of speaker of the upper house of parliament, while all this was happening? Readers of this bulletin will recall that he late last month requested a leave of absence to recuperate from his decades of service to the state. But a mysterious flight that caught the attention of Amsterdam-based Turkmen.news will set tongues wagging. As the outlet has reported, citing its unnamed sources, a plane flew into Ashgabat from Frankfurt, Germany, on March 31 carrying five doctors that the website concludes were in Turkmenistan to assist a “member of the Berdymukhamedov family.”

“It is known,” the website states, in the loose style of attribution that Central Asia-focused outlets often deploy, “that the former president suffers with diabetes. Maybe he needed to go on sick leave? Maybe that is why he had to hand over power so urgently?”

Sure enough, Gurbanguly Berdymukhamedov has disappeared from public view. But since he is under no obligation to appear on television daily, as used to be the case, his ailments, should the ex-leader be suffering any, will be easier to keep secret. After listing other potential patients of the visiting German doctors, Turkmen.news is forced to concede that it can only speculate.

On the international front, Berdymukhamedov spoke by telephone on April 8 with Russian President Vladimir Putin, who took a break from overseeing the invasion of Ukraine to extend his best wishes to his Turkmen counterpart on the occasion of the 30th anniversary of the establishment of diplomatic relations between their nations. Turkmenistan steers clear of anything controversial, such as Ukraine, but it certainly has no intention of keeping its distance from Russia.

Putin invited Berdymukhamedov to visit Russia and, according to the Kremlin readout of the call, this offer was accepted.

Neutral Turkmenistan newspaper reported on April 8 that the Turkmen leader had approved a resolution to approve the composition of the Turkmen team in the intergovernmental Turkmen-Russian commission for economic cooperation. Berdymukhamedov was himself co-chair of the commission before last month’s election.

That commission duly convened over the weekend. On April 9, Russian Deputy Prime Minister Alexei Overchuk, who is the Russian chair of the commission, traveled to Ashgabat. One member of the visiting delegation, the governor of Chelyabinsk region, Aleksei Teksler, offered to sell pipes for the construction of the projected trans-Afghan TAPI natural gas pipeline. The Chelyabinsk Tube Rolling Plant accounts for around one-tenth of Russia’s steel pipe output.

These kinds of commercial overtures have been made repeatedly over the years, but with international sanctions having radically restricted the range of countries with which Russia can trade, it feels probable that Turkmenistan is going to be getting far more attention.

Another member of the visiting Russian team, Astrakhan governor Igor Babushkin, proposed setting up direct flight between his region and the Caspian port city of Turkmenbashi, so that more Russians could visit the Awaza tourist zone. Babushkin also raised the idea of his region’s shipbuilders fulfilling commissions for Turkmenistan.

Just to show he is not becoming a Muscovite patsy, though, Berdymukhamedov has also addressed a message to U.S. President Joe Biden expressing his intent to expand and strengthen “positive engagement” with the United States. He spoke approvingly of the business being done by some American companies in Turkmenistan’s civil aviation, agriculture, electricity, and banking sectors and said he hoped to see more of the same.

Washington is in an odd position over Turkmenistan. Progress on TAPI would broadly fit its strategic vision for Central Asia to engage more deeply with South Asia and, accordingly, rely less on Russia and China. But there would be a rich irony in this happening through the offices of the Taliban. And if that project were completed – or at least started – with Russian-produced infrastructure, it would add just another layer of awkwardness to the whole affair.

The choice of terms like “positive engagement” probably needs to be read in this optic. Turkmenistan wants to engage with the West, but only on the explicit understanding that it needs to be afforded some flexibility to engage in a sustained fashion with undesirable partners in the interests of attaining virtuous ends while doing so.