Is Turkmenistan preparing a city to name after the former president? Keeping out information and keeping in people. Our weekly briefing. 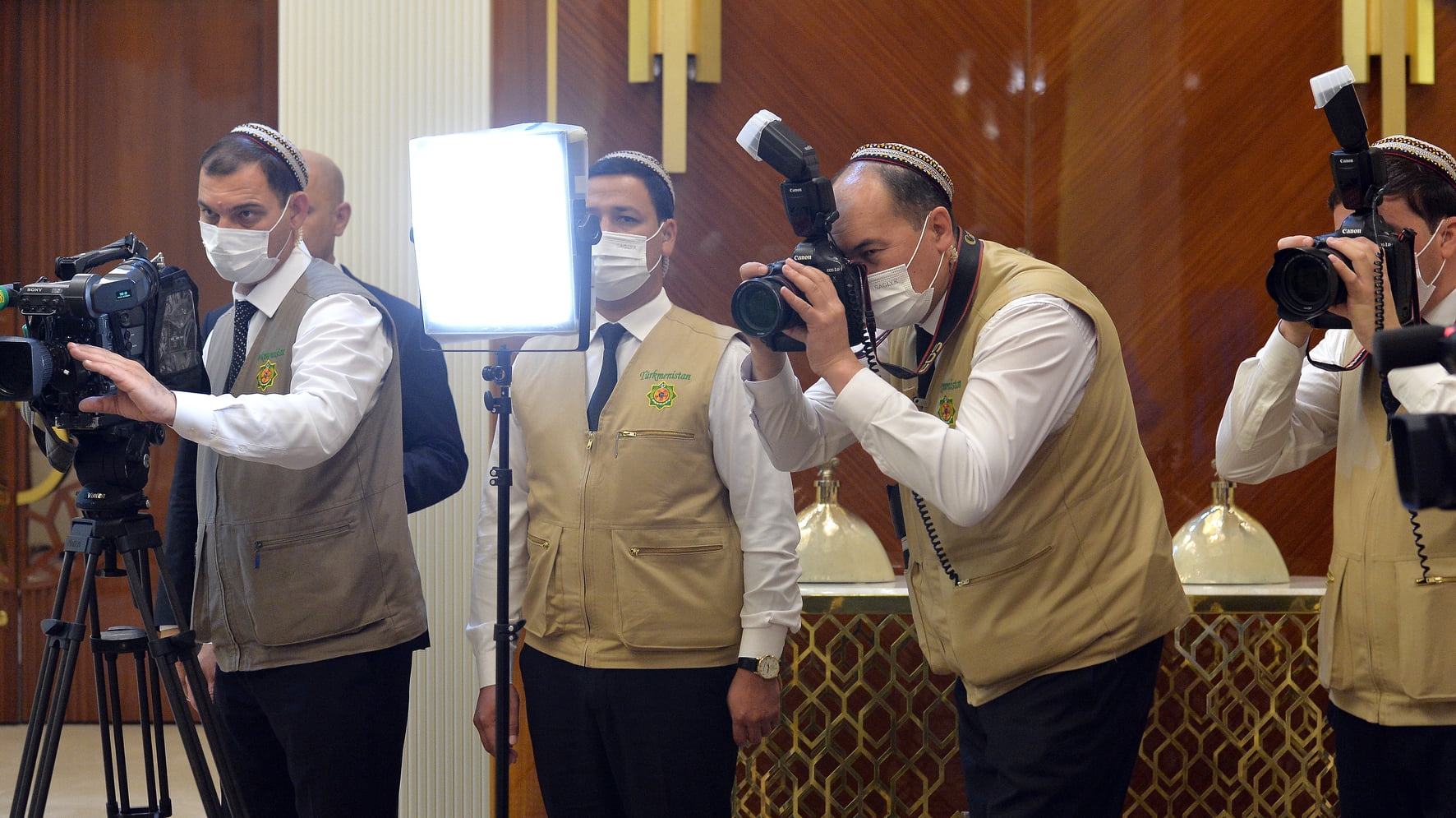 Anybody pining for the on-camera antics of Turkmenistan’s former president was in for a treat on September 17, when state television devoted a large chunk of the evening news bulletin to an update on Gurbanguly Berdymukhamedov’s latest leisure activities.

Although ostensibly focused on the former leader, much of the report was a slice of agit-prop for the newly built capital of the Ahal province, which is set for its grand inauguration in December.

After performing a pre-dawn inspection of the International Akhal-Teke Equestrian Complex on the outskirts of the capital, Ashgabat, Berdymukhamedov mounted a white steed called Garashsyzlyk and surveyed the horizon, upon which cranes putting together the final pieces of the shining new city could be spied. 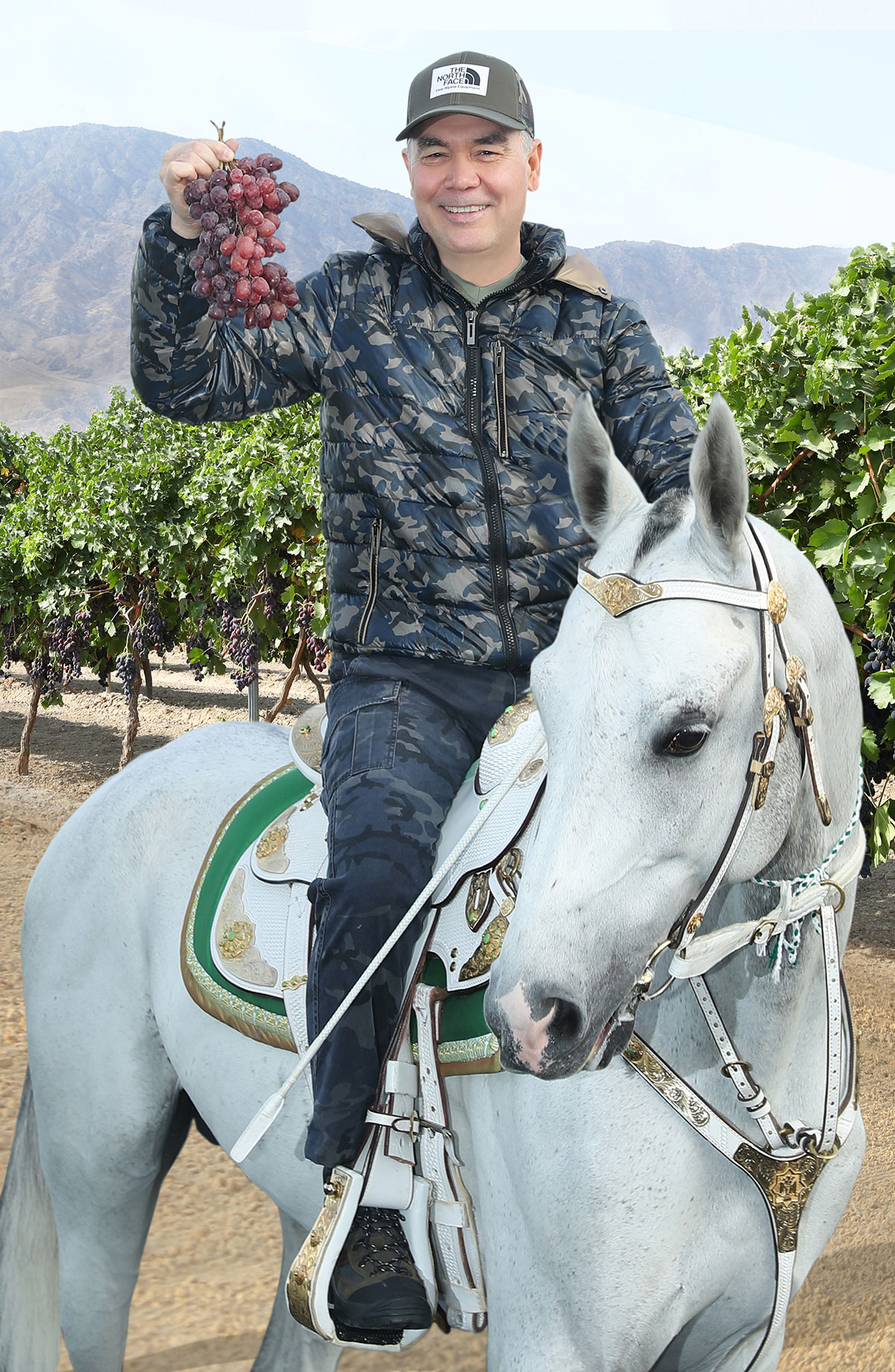 The former leader, who still occupies a constitutionally significant but functionally inexistent role as speaker of the Senate, then led his horse through a vineyard belonging to military and law enforcement bodies. Amid the rows of plants, he posed obligingly for a photo on horseback while holding up a large bunch of grapes before trotting away at speed. The unsubtle symbolism here being that that the new provincial capital sitting just beyond the vineyard is to be a place of bounty.

The scene later switched to a 10,000-seat sports stadium in the yet-to-be-named new city. Berdymukhamedov kicked around a soccer ball and then headed off to the gym, where he demonstrated a routine of highly unflattering exercises on a stability ball that he explained would be particularly useful for improving the core strength of jockeys.

A question mark lingers over what name could possibly be given to this new city. The TDH state news agency appears to be dropping some clues with the tenor of its reporting.

“The construction of a new city in this beautiful corner of the foothills of the Kopetdag is evidence of the social orientation of policies initiated by the Hero-Arkadag,” the outlet wrote, deploying the former leader’s personality cult title, which translates as something along the lines of “Hero Patron of the People.

If the plan is indeed to name the city after Berdymukhamedov, who stepped down earlier this year, it was a curious sight to see a normally on-message outlet like Ashgabat-based Arzuw lead its website for an entire day with the news that the capital of Kazakhstan has reverted to its previous name, Astana. The city’s former name, of course, was Nur-Sultan, a tribute to Kazakhstan’s former president, Nursultan Nazarbayev. As Arzuw points out in its report, lawmakers in Kazakhstan concluded “it was wrong to name the capital after Nazarbayev during his lifetime.” No such objections are ever likely to be heard in Turkmenistan.

The main business of the week for the current president, Serdar Berdymukhamedov, the son of his predecessor, was the Shanghai Cooperation Organization summit in Samarkand, Uzbekistan. Turkmenistan is not a member of the SCO, but so much of its economic and security affairs are tied up with that bloc’s members that it might as well be.

Sure enough, President Berdymukhamedov made very welcome noises during his speech at the summit. In one passage he spoke about Turkmenistan’s willingness to “discuss the issue of providing its territory and infrastructure in the interest of the SCO building intercontinental and regional transit routes for the supply of goods and services.”

In connectivity terms, Turkmenistan wants to be all things to all nations. This is why President Berdymukhamedov quickly followed up his observation about how the SCO should be involved in implementing the consolidation of a China-Central Asia-Caspian Sea-Black Sea axis by noting that Turkmenistan was eager to ease the movement of cargo from Russian ports in the Baltic Sea to terminals in the Persian Gulf, the Arabian Sea and the Indian Ocean.

In some things, Turkmenistan wants to be joined to the rest of the world. In other things, it wants the opposite.

As always with Turkmen state news reports, no elaboration is provided for what Meredov was proposing, but this kind of idea carries a distinct whiff of the “internet sovereignty” favored by China. In other words, sealing the local internet off to the world to ensure no undesirable content is able to soil the minds of Turkmen citizens.

While information should not be able to come in freely, a sanitized form of it should be able to leave. Meredov suggested in the same meeting that the government reach out to “major international media companies” to ensure the “prompt and consistent dissemination of information about the country in the global internet space.” This is a fairly pointless endeavor. Only state Russian media, and possibly analogous outlets in China, would have any interest in such a tie-up. Not because they have the slightest interest in Turkmenistan’s self-promotion, but merely to massage the ego of the country’s leadership.

As for people who do not work for state (or state-aligned) media, they are out of luck. The Committee to Protect Journalists hopefully addressed a letter to President Berdymukhamedov on September 15 asking him “to end [his] country’s restrictions on a free and independent media.” The CPJ then seized the opportunity of the letter to raise the case of imprisoned reporter Nurgeldi Halykov, who was sentenced to four years in prison in 2020 on charges of fraud that his defenders say came in retaliation for his journalism.

“Turkmen journalists tell us that most foreign media and social media networks have long been inaccessible. A government campaign to block whole servers hosting the VPNs (virtual private networks) that citizens use – at risk of prosecution and official harassment – to circumvent this stifling censorship has reportedly led to ‘near complete’ internet shutdowns on several occasions this year,” the CPJ said.

The Turkmen government doesn’t want people freely getting out of the country either.

As was to be expected, Turkey on September 14 acceded to a request from Turkmenistan to revoke its visa-free regime for Turkmen nationals. The visa-free arrangement, valid for stays of up to 30 days, was ostensibly intended for tourists, although it had been used widely by shuttle traders.

In one fell swoop, that line of potential independent earning has been almost entirely throttled. Only visa applicants that meet the requirements of Turkmen migration officials – not just those of Turkey – will get permission to travel to Istanbul, where most Turkmens tend to go for work and trade.