Turkmenistan: Shortages in the Era of Might and Happiness 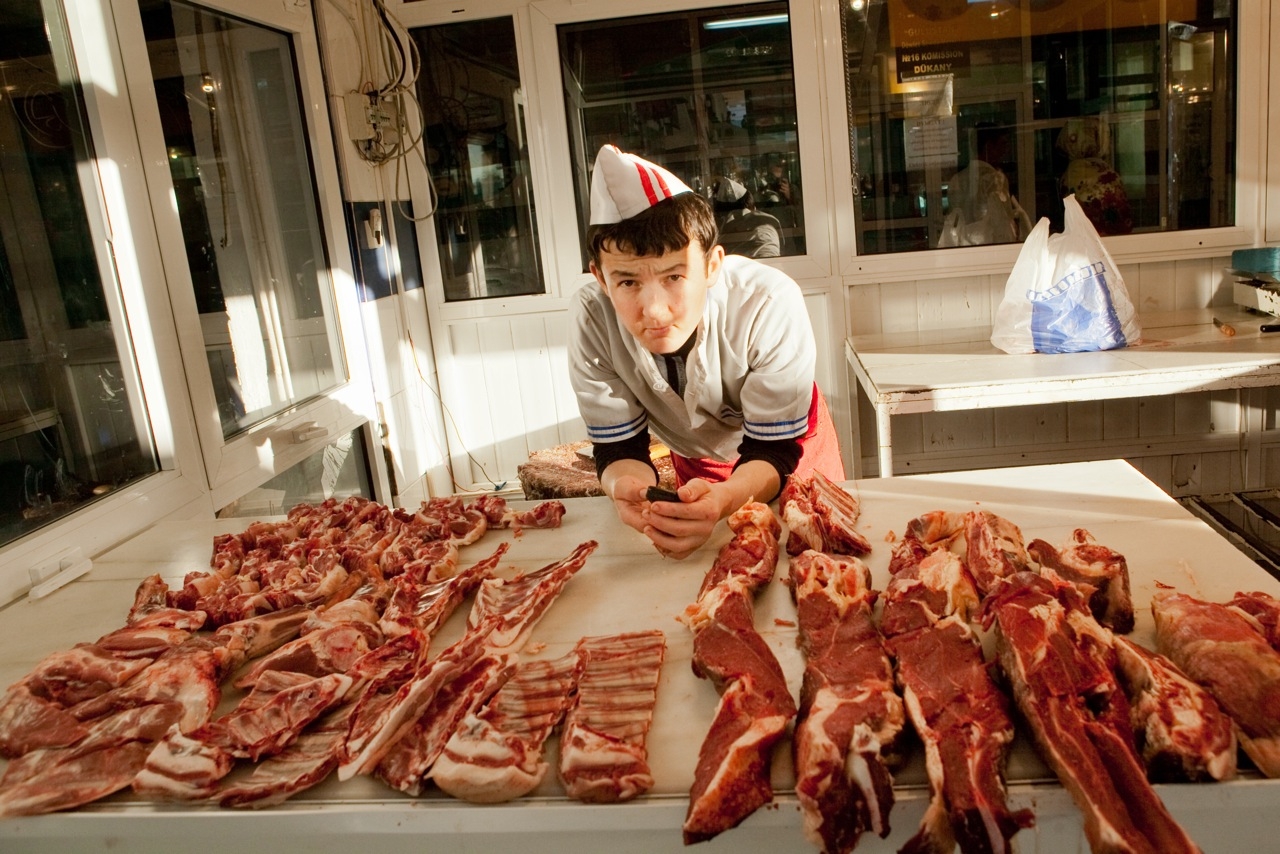 A butcher waits for customers at one of Ashgabat’s markets. Turkmenistan celebrated the 25th anniversary of independence recently with a mass show of pomp and ceremony, yet many households are struggling to keep pace with the cost of living. (Photo: David Trilling)

Turkmenistan celebrated the 25th anniversary of independence recently with a mass show of pomp and ceremony, yet many households are struggling to keep pace with the cost of living.

Dependent on energy-export revenue to fill the government’s coffers, a precipitous fall in fuel prices has caused a sudden and drastic economic downturn in Turkmenistan. As a result, essential consumer goods are now starting to grow scarce. The growing list of items vanishing from store shelves is testing the patience of long-suffering Turkmen citizens and exposing cracks in the government’s professed “Era of Might and Happiness.”

Layered on top of the economic woes, the lack of freely available foreign cash drove the black market rate for the national currency, the manat, up to eight to the dollar. The official rate stands at 3.5 per dollar.

In line with these developments, prices are rising in Ashgabat stores for those goods that remain available. With the exception of bread, dairy goods and some types of grain, all imported goods are becoming more expensive.

Reports of scarcities, including cooking oil and sugar, began to surface in mid-October. Some state-run stores are still occasionally stocking the most widely sold form of oil — a brand called Ahal, which is made from cottonseed, and favored for its low cost. But such supplies are being rationed at a cost of 3.40 manat per liter. Deliveries of the oil arrive in shops daily, but disappear quickly, as customers arrive in large numbers to buy up their allocated one or two bottles.

Some stores, including the Turkish-owned Impash supermarket and the popular Belarusian groceries shop, have reputations for stocking otherwise hard-to-find goods, although at higher prices. But even these pricier retailers are experiencing shortages. Impash stocks olive oil, but only at the astronomical price of 40 manat per liter.

Things are even worse with sugar, which is virtually impossible to find at the state-set price of 3.20 manat per kilogram. Shops receive sporadic and small supplies of sugar that quickly fly off the shelves. It is being rationed, with shoppers able to purchase only 1 kilogram at a time.

Soviet-style speculators are stepping in, trying to fill the void. One convenience store, called Berkarar, took to only selling sugar to people who also purchased sodas or juice – items that are unaffordable luxuries for poorer Turkmen. Other private shops that are able to source sugar are said to be selling it at 10 manat or more per kilogram.

Other items that have become scarce in the past few weeks include chicken thighs, which sell at 8 manat per kilogram, and chicken meat (14 manat per kilogram). Shops that stock these items also sell them in rationed amounts.

Lately, state shops have been running short on beans, which were, until recently, sold at 6-7 manat a kilogram. Market traders can sometimes sell them, although only at 10 manat.

Shortages are being exacerbated by panic buying. With little guidance from the state, shoppers are hoarding staple goods to the extent their means, and circumstances, permit.

“People are creating the clamor themselves. They grab everything they can and in large amounts — that is why we are seeing a shortage,” said Sonia, an employee at a convenience store in Ashgabat.

Far from acknowledging any issues, the government is sticking firmly to its line that Turkmenistan is enjoying ever-growing output. During a November 4 government meeting, Deputy Prime Minister Bashimmirat Hodzhamammedov claimed that output had increased by 3.4 percent during the first 10 months of this year, compared to the same period in 2015. The agricultural sector alone grew by 11.3 percent over that period, Hodzhamammedov said.

Even so, President Gurbanguly Berdymukhamedov does not seem to be completely ignoring the problem. Evidently sensing a ripple of public discontent, Berdymukhamedov issued instructions during the November 4 Cabinet meeting for officials to “ensure food abundance.” A few days earlier, on November 1, Berdymukhamedov visited Russia for talks with Russian leader Vladimir Putin that seemed in part addressed at recharging trade ties.

It is not entirely clear what kind of deal Berdymukhamedov may have reached with Putin. All that is certain is that, after Berdymukhamedov’s return, shops in Ashgabat suddenly began stocking Russian sunflower oil, although at the relatively expensive price of around 8 manat per 0.9 liter bottle. Volatility in the black market currency market began to abate at around the same time.

Berdymukhamedov’s penchant for promoting healthy living has placed the country’s smokers in a particular bind. Even before the shortages began to hit, the habit had been in Berdymukhamedov’s crosshairs. Yet up until recently a handful of places in Ashgabat had been selling cigarettes at inflated prices. Things changed, however, after Berdymukhamedov slammed the cigarette trade at a State Security Council meeting on November 2.

“Those trading in this line of business are harming not just themselves but also the authority of our healthy society. So these traders are worthy only of contempt and should have no place among us,” he was quoted as saying by the state newspaper Neutral Turkmenistan.

State media likes to boast about World Health Organization (WHO) data that purportedly shows only 8 percent of people in Turkmenistan smoke tobacco — the lowest rate in the world. But if lines at places where cigarettes could be found until recently were any indicator, the WHO’s data might be faulty. Some cigarettes sellers drew crowds numbering in the hundreds -- not just of men, but also of young and old women.

And where there were smokes, there was fire, as scrums to land a packet of cigarettes reportedly sparked scuffles at several venues.